We packed up, hooked up, and took off on Friday -- almost right on time! It was about a 3-hour drive to Sauk City/Prairie du Sac, and we had a very scenic drive a la Google Maps and the "avoid highways" feature.

We checked into the campground and set up Ducky, and then I drove Rusty over to the art center so he could set up his teaching space. 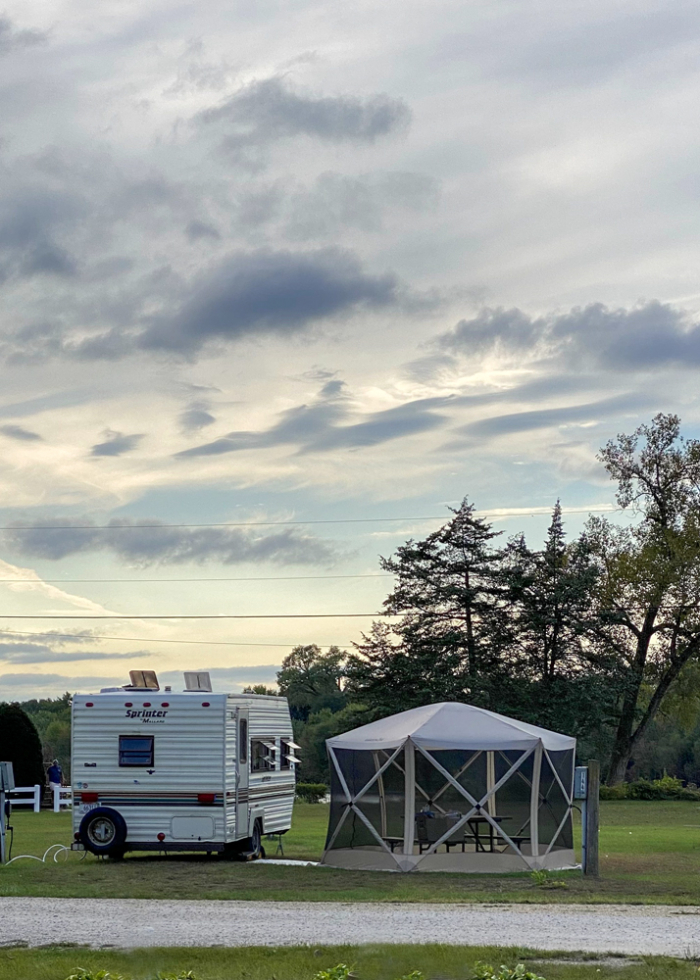 We borrowed Ali's pop-up gazebo, which expanded our "living space" by quite a bit! haha. 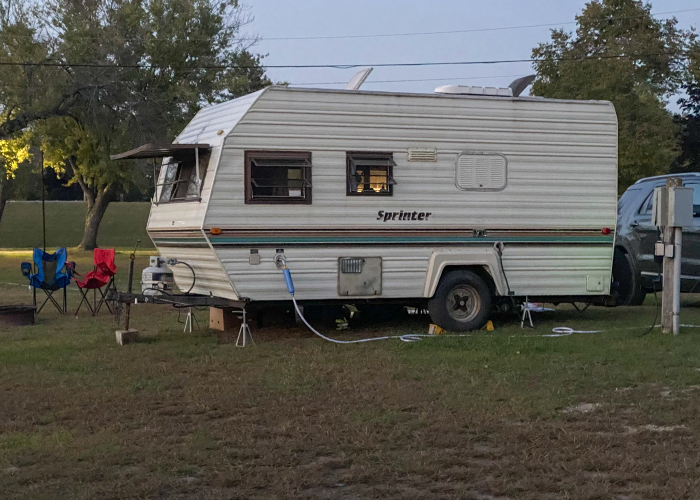 It was the first time hooked up to water other than in our own driveway, and only the second time hooked up to electrical. I finally used some equipment that I've had for over a year (surge protector, white hose, pressure regulator), and then some newer stuff (water filter, sewer hose).

We had cold water only (but brought an electric kettle), and there's a still-unpatched leak in the black water tank so we didn't use Ducky's toilet. We were roughing it just a little. There were toilets & showers very close by, though. 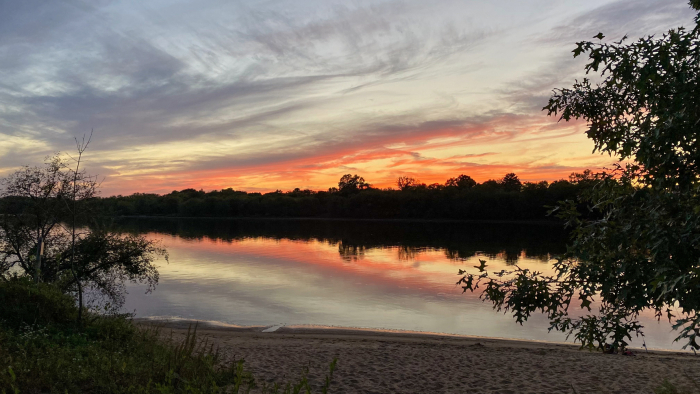 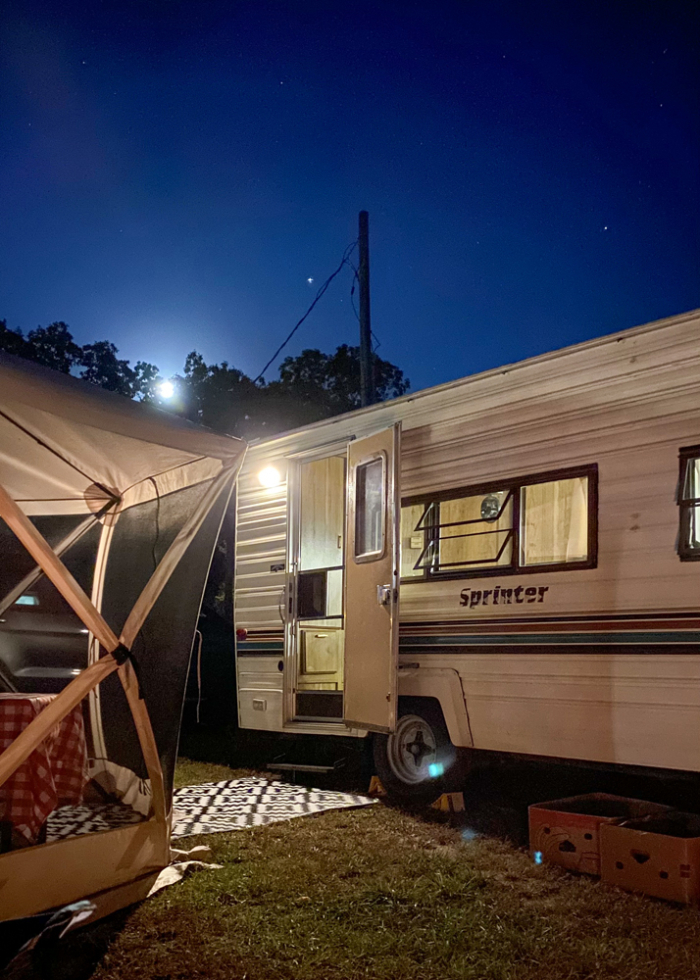 Other than Sunday, which was a scorcher, and a rain shower as we were making our departure/emptying the gray tank, the weather was great. Cool at night, breezy, clear skies... we watched ISS for a full 6-minute pass overhead and an almost-full moon rising on Saturday night while sitting by the campfire.

I made coffee & Rusty made breakfast every morning, then I took him to the art center. I diddled around, went to the grocery store, visited an antique mall, a cheese store, and most importantly... 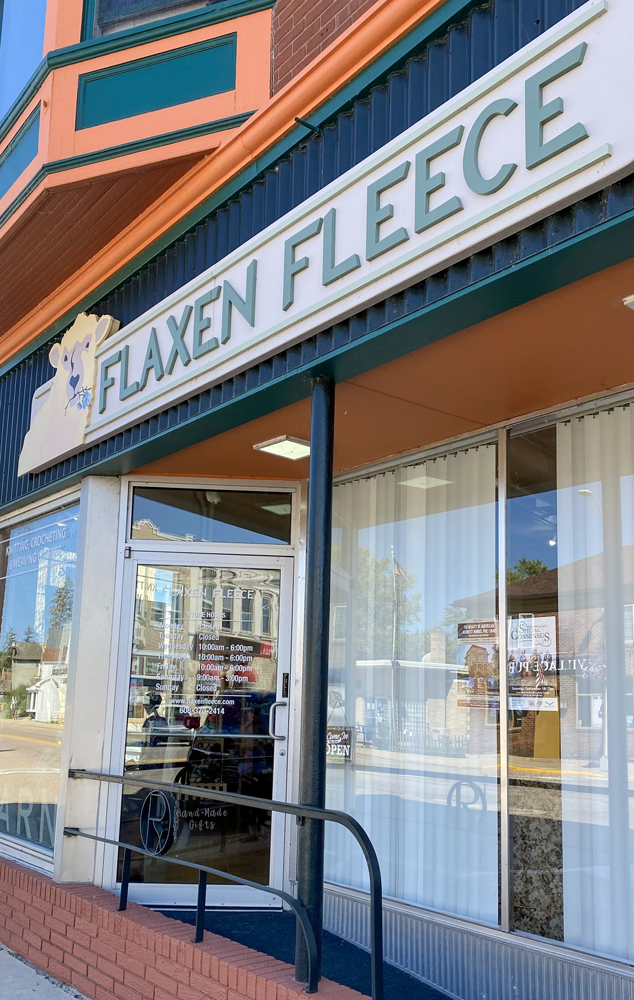 ...a YARN STORE! My only opportunity to stop at Flaxen Fleece was on Saturday, and by then I'd realized that I had everything I needed to work on finishing by blanket... ...except the actual blanket!! So it was a CRUCIAL stop. I had a pattern in mind that I wanted to shop for, and brought needles along, too, so at least I was prepared for something. 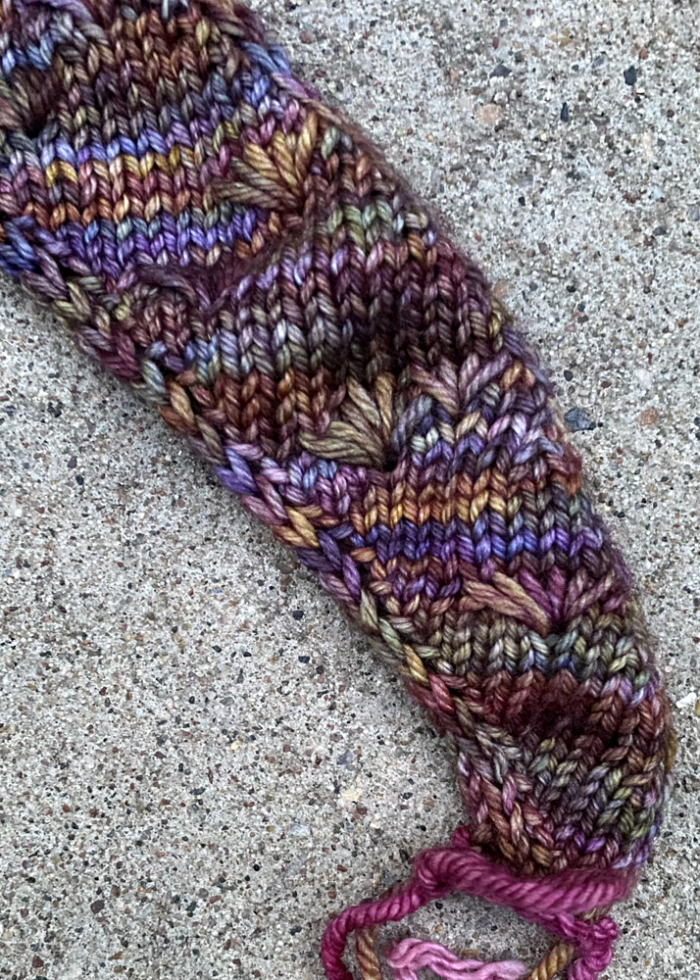 The photo was taken this morning before work... it's already pretty dim at that time of the morning! (My headlights were on the entire way to work this morning.) Anyway, the colors are a bit more vibrant IRL. It's the start/headband portion of Wild Fields, just published in Knitty worked in Malabrigo Rios, purchased at Flaxen Fleece. I bought a few hanks (thinking headbands/hats for the girls), and a couple of mini-skeins just because. It's the first actual knitting I've done in MONTHS (it's like riding a bicycle).

Anyway, back to our adventure. I had lunch "in" by myself everyday, and then we'd find a restaurant for dinner -- a brewery fish fry on Friday, Mexican on Saturday, BLTs at a pub on Sunday. I never made it to Wollersheim... it just wouldn't have been that fun on my own and they were only open 12-5, anyway. I thought the campground was close enough to the art center that Rusty could walk, but it wasn't, and had I known that I'd be driving every morning I might have chosen a more remote spot -- in a state park or something. It was "ok" -- right on the Wisconsin River, the facilities were clean, the owner was very responsive (to a complaint about a squeaky swing that needed oil) -- but there were no trees in our part of the RV park and it was very close to a busy highway (the only time it was quiet was for about 20 minutes around 4am). There were a lot of established "seasonal" sites further into the property and, oh boy, some vintage travel trailers that were fun to see!

It was a lot of fun, and kind of shame that it might be our only outing with Ducky all year! I felt truly relaxed and that I had an actual vacation!

For your first time out with some new equipment, it sounds like you, Rusty, and Ducky had a successful, relaxing, and enjoyable weekend! Here's hoping you can maybe get out again for another night or two this fall. You'll be real pros by then!

Sounds like a pretty successful outing, even if it's the only one this year. Each time you a learn a few things and soon you'll be an old hand. That yarn is totally drool-worthy.

Even though it sounds like a mixed bag, I think you learned a few more things about what does and does not make for a successful camping trip. My fingers are crossed that you'll fit in one more trip before it gets too cold.

Fun! We take off Sunday and I can't wait. We usually stay at KOAs...even though we have a shower and toilet in our camper, we don't like to use them...I don't want to fool with a sewer hose. We do have hot and cold water and electric. I usually cook outside (hot plates, camp fire). We've planned our our menus and know what we hope/want to do. I do hate it when traffic is loud. Love the gazebo you borrowed from Al...now I want one!

I think the trip has given you a lot of useful information that will come in handy the next time you take Ducky out, so while it may not have been perfect, I'd say it was a success! It's also a good thing there was a yarn store nearby! That Malabrigo is beautiful.

That gazebo is just awesome! What a perfect living area expander! :) I hope you will be able to squeeze in another weekend away in Ducky! Welcome back!

What a great weekend adventure! (Except . . . HOT is hard to deal with when you're camping.) (Although maybe pouring rain and thunderstorms would be worse??? ) Anyway, so happy to see Ducky getting a good workout. I love the Wild Fields pattern and the beautiful yarn you chose! Can't wait to see how it comes together. (And . . . forgetting the blanket. Oh. How many times have I done just that kind of thing when going to the cabin!) XO

Well it appears that a good time was had by both of you. You had the extra bonus of shopping at a yarn shop!! Wild Fields is perfect for 2 of my girls-I better get busy. I've forgotten esssentials more than once- now I make a list and pack projects first then clothes.

Any time you find a yarn store is a Good Time.

I'm glad knitting is like riding a bicycle (has it really been that many months?) and you did a great job remembering all the camping stuff, too! Sure hope Ducky gets a few more outings next year!!