Museum of Me: Welcome!
Weekending

It's a mash up! Joining Carole & friends for Three Things on Thursday... in combo with a belated Unraveled Wednesday post with Kat & the Unravelers. 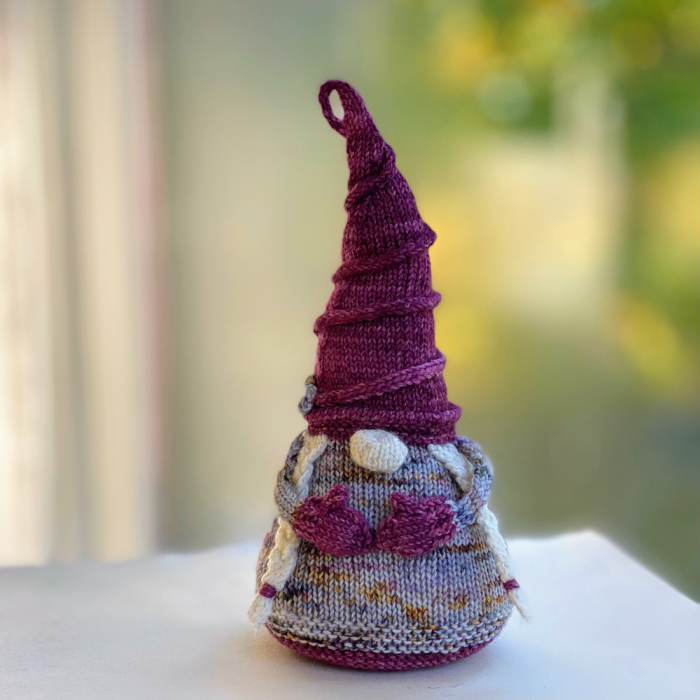 I finished her last Friday! 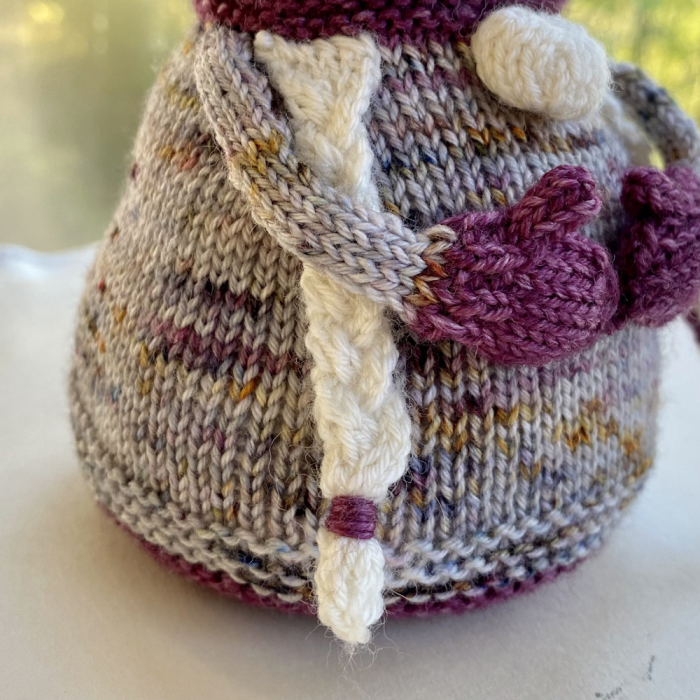 I can't remember the last time I kept up with a Mystery Knit-along. This was a fun project, even with all the fiddly bits (the flower on the hat, the nose, the mittens, the braids) and interminable I-cord -- a.k.a. the things that make her so special! 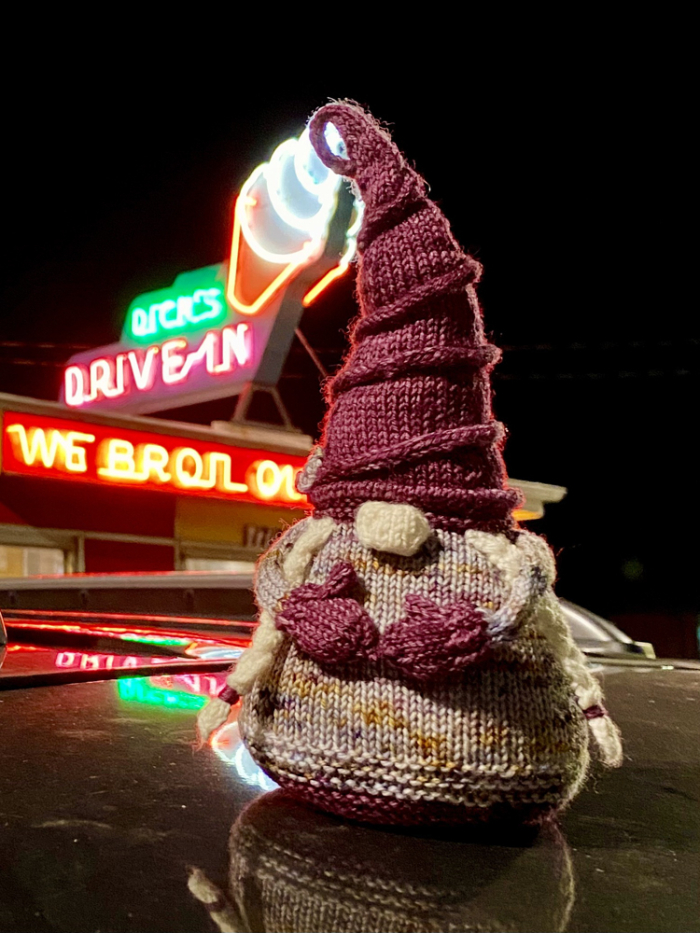 I took her out for ice cream on Tuesday after Knit Night. I really wanted to take her photo with our local iconic neon drive-in sign illuminated! 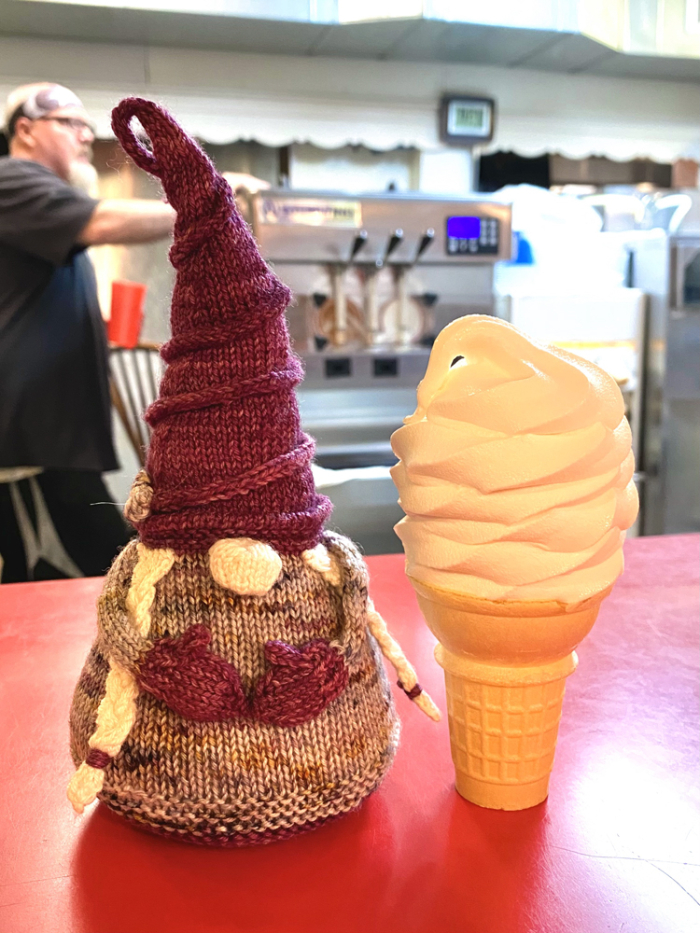 I also wanted a photo with an actual ice cream cone, so I took her inside. The employees were all quite charmed. 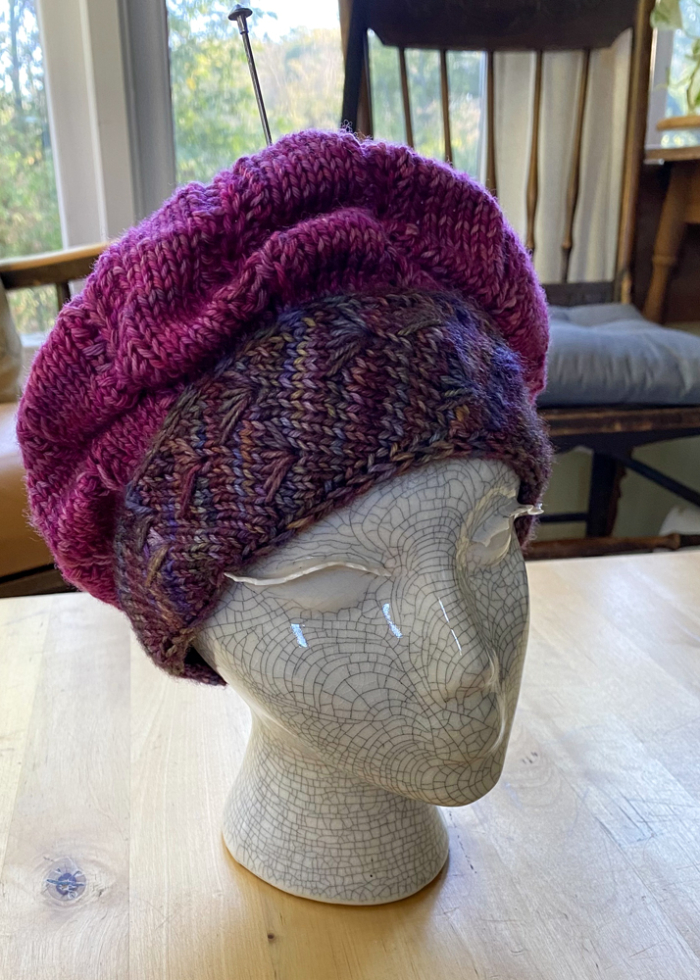 I finished this cute little hat on Sunday. It's intended for Malina and I'd planned to take a photo of her wearing it last night when they were over for dinner... not only did I not get a photograph, I didn't even give it to her! So there's still a chance for a photo op.

I found myself flipping pages back & forth a lot while knitting this hat, and the abbreviations are all on a separate knitty.com page... a little annoying, especially because I started this while camping and internet was not great. The flower stitch was fun to do, once I figured out how to pull the last "petal" through without losing the previous two, and it looks great!

These two FOs are not only the first FOs since the wave of knitted gnomes that got me through Covid in December/January, they're also the first actual knitted items since the gnome wave... and one of them isn't a GNOME!

And I've started another hat, reversing the colors, for Gin! I bought enough yarn for four hats, so... 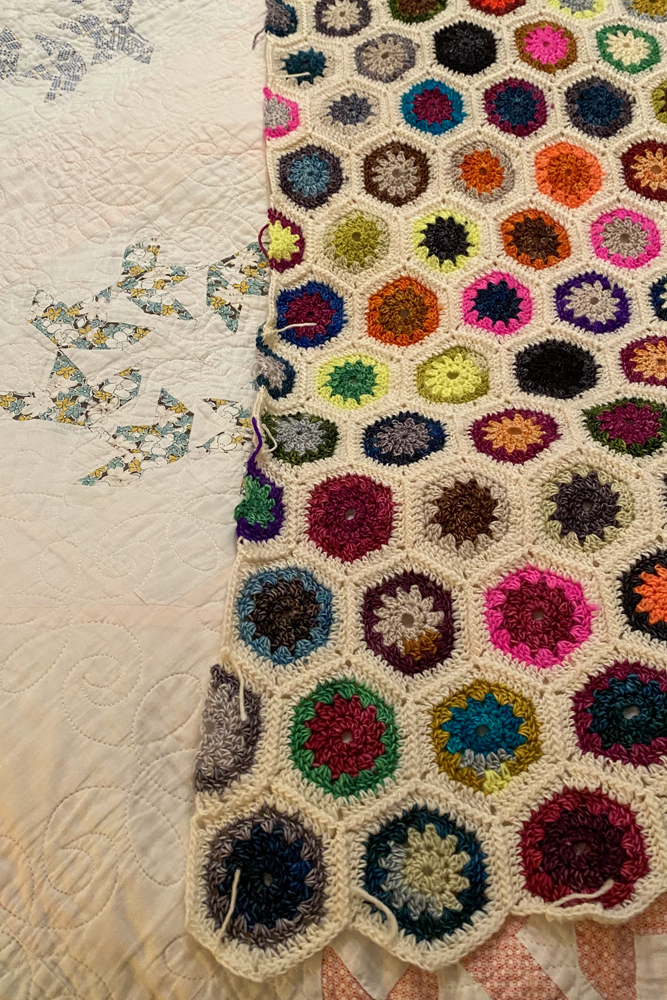 (It's so dark in the morning.) I did a lot of research to see how people finished and/or squared off the edges of crocheted hexagon blankets! I've decided on half-hexagons for the sides, and will likely use some longer stitches to fill the smaller divots on the ends. 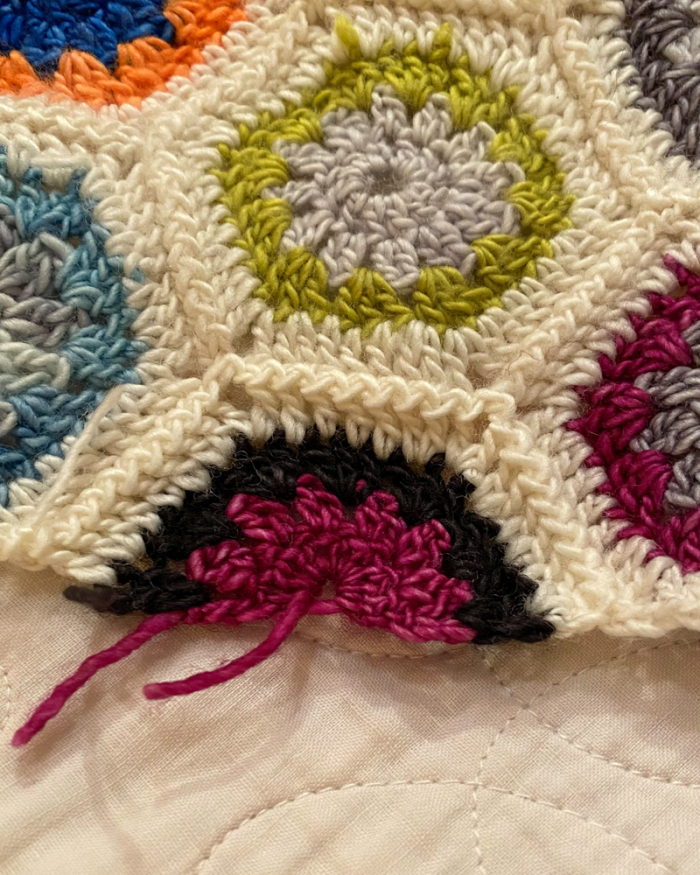 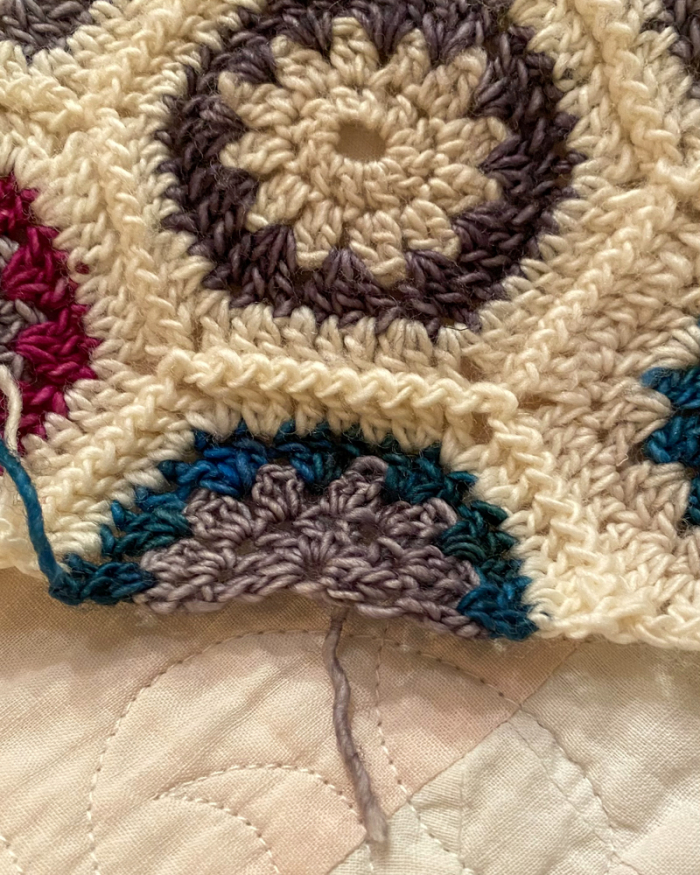 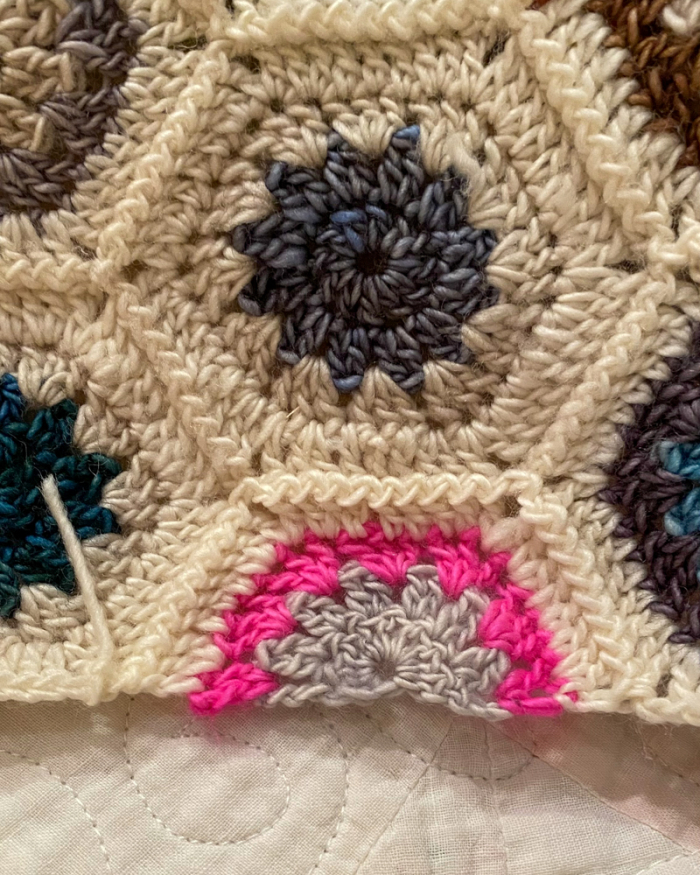 Those are the three most recent hexagons and the best, so far. There are some wonky ones at the beginning, but that totally fits with the vibe of this blanket. I think there are only four more on this side, then up the other (and they go pretty quick), and then -- FINALLY -- the border. I've ordered two more skeins of the natural color. Hopefully, I'll only need one, but regardless, this is probably one of my most costly projects ever.

I've recently finished Laundry Love: Finding Joy in a Common Chore by Patric Richardson & Karin B. Miller. It was a quick, entertaining, and informative read! I'd previously (slowly) begun changing up a few things in my laundry practice, but I'm on the way to changing it quite a bit more.

I've put The Woman They Could Not Silence: One Woman, Her Incredible Fight for Freedom, and the Men Who Tried to Make Her Disappear by Kate Moore on pause.

I've just begun listening to Stanley Tucci's memoir, Taste: My Life Through Food, and it's delightful... as is he, and his Instagram, with plenty of cooking & cocktails (with recipes). I'm adding one of his cookbooks (or two) to my Christmas Wish List*! And need to queue up his Emmy-nominated show, Searching for Italy, on Hulu.

*Speaking of Wish Lists... I'm sure one or two of you has recently received Amazon's "Ready, Set, Play" toy catalog in the mail. Ali did, too. She said that the kids grabbed it, circled all but five things, and put it back in the mailbox thinking that Santa would be by to pick up. I love the way those kids think!

Oh, that gnome is just adorable! The hat is great (quequay is one of my favorite Malabrigo colors), and the blanket is coming along so beautifully. I like the way you mashed Kat and I together this week!

I love the 3TT/Unraveled mash-up as well! Your GNORWEN!!! She is a traveling gal! And too cute! (that flower... oy, lol)

I am off to find Stanley Tucci's book! Thank you!

oh my goodness, I love that you took Gnorwen out for ice cream!! I have Stanley Tucci's book on my christmas wish list, too. (well, if I'm honest, my birthday wish list!)

Gnorwen is great and so is her ice cream photo op! I love Wild Fields and look forward to seeing it on Malina. And those half hexies are really pulling the blanket together. I saw that you had finished Laundry Love and immediately put it on hold. It sounds like it's right up my alley! Thanks!

The laundry and cooking books sound great! Thanks for the recommendations. I love that the wish book got put back in the mailbox for Santa - LOL. Gnorwyn is gorgeous! I can't do the fiddly knitting, but I sure do admire what you do, and that you took her out for ice cream!! The hat looks fabulous. I had forgotten all about it, but now remember when you started it while camping. Can't wait for the photo shoot with Malina. As always, I'm smitten with your hexies. That is a gorgeous blanket!

I've knit two of Sarah's gnomes and decided I'd had enough, but her last two mystery gnomes have seriously tempted me. I love your Gnorwen, especially that shot with the neon of the ice cream place behind her! I'm also absolutely in love with your hexi blanket. It's epic!

The GNOME!! She is totally the CUTEST! The hat may have been fiddly with all that i-cord but she is perfection. The hat would keep the ears warm in fashionable style, but that blanket, as is your usual MO is truly EPIC.

Though cute from top to bottom, Gnorwen's hat is my favorite.

The Amazon catalog arrived a few days ago. I'm many years out of toy-buying, but still love looking through it.

Gnorwen is fabulous, and I had no idea a gnome was approximately the size of an ice cream cone. Off to look up the laundry dude, as I am, alas, the Laundry Fairy at our house.

Taking a gnome out for ice cream is inspired. She is darling. The hat is pretty and the blanket is beautiful. Well done.

That Gnome is so adorable! Love your hat too, beautiful and just a cozy looking afghan.