October!
Museum of Me: Welcome!

I am pretty chuffed, having managed this entire camping trip by myself. I've never backed up the camper without a spotter before... it helped that I was familiar with the site, had a little practice with a spotter under my belt, and there was only one big tree to worry about (haha, it wasn't even very close). Also, being Sunday afternoon, there were very few "witnesses." There were only 4-5 occupied campsites in view. I'd have been much more self-conscious & nervous if we'd had close neighbors! I spent quite a bit of time streamlining & organizing my camping set-up/tear-down checklist before last month's trip, and it makes all the difference. 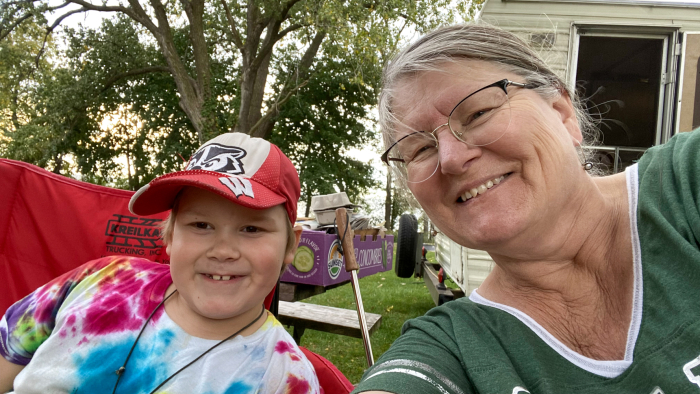 I look pretty pleased with myself, don't I? haha. I'd just finished leveling, supporting, chocking, turning on the propane, and hooking up the electrical... I had backed in just far enough to reach the box!*

Oh! Look at this! More teeth have been lost... 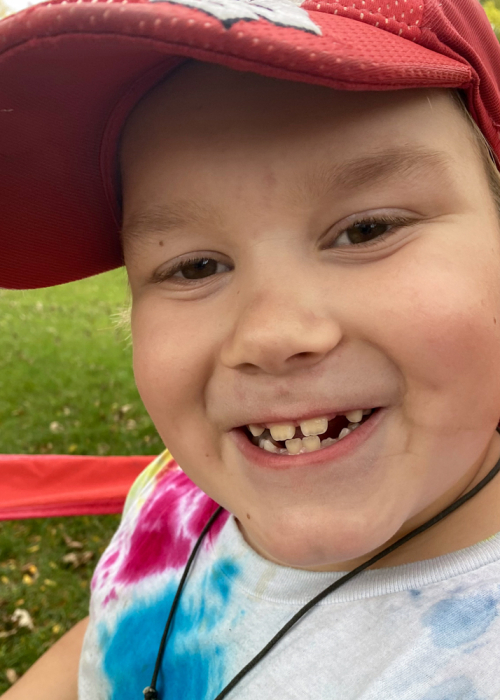 Turns out, the "backyard" playground wasn't as big a perk as I imagined. 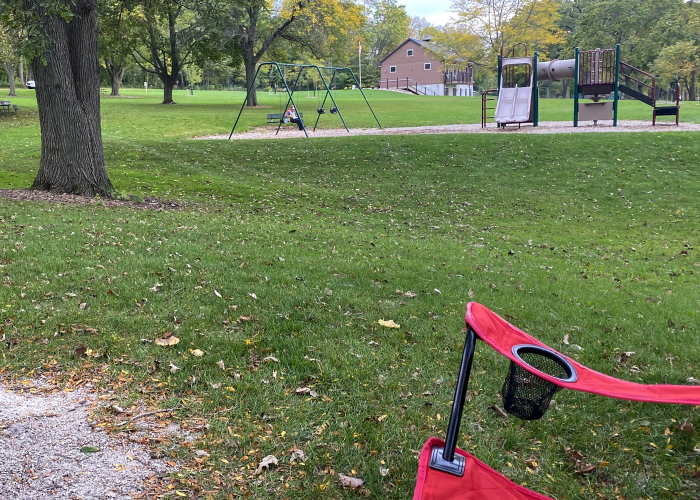 That's the extent of Junah's playground action. I was informed that it was for little kids and he didn't like that type of swing. Oh well.

It was a little breezy, but we got a fire going with little trouble. Roasted hot dogs & s'mores were on the menu! 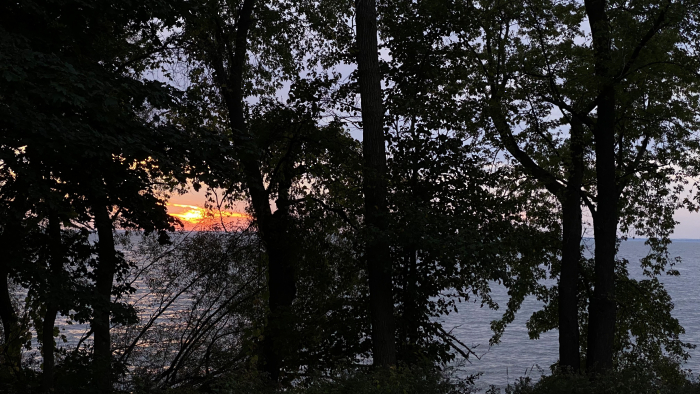 There was a lovely sunset. 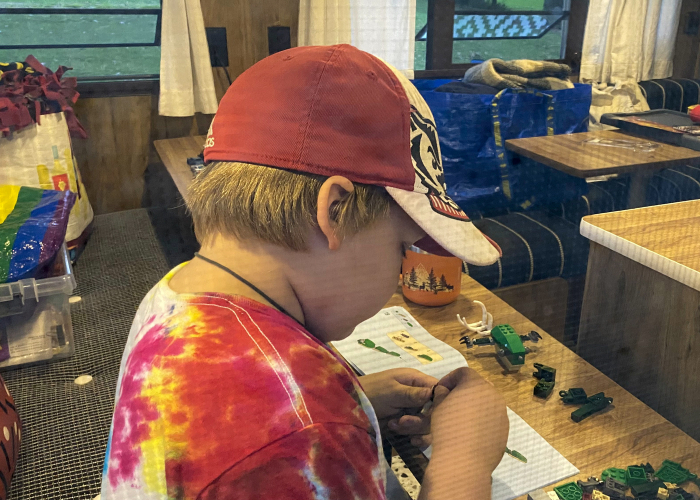 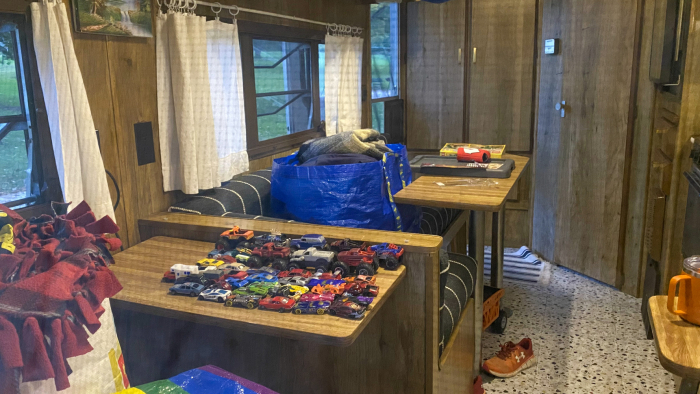 Junah was inside, working on a LEGO 3-in-1 dinosaur set that I'd picked up for the occasion, and I couldn't help taking a couple of stealth photos through the window. He was working on the T-rex! Before we decamped, T-rex gave way to Triceratops. Oh yeah, he also brought a few cars & trucks!! He's obsessed with Monster Trucks at the moment! 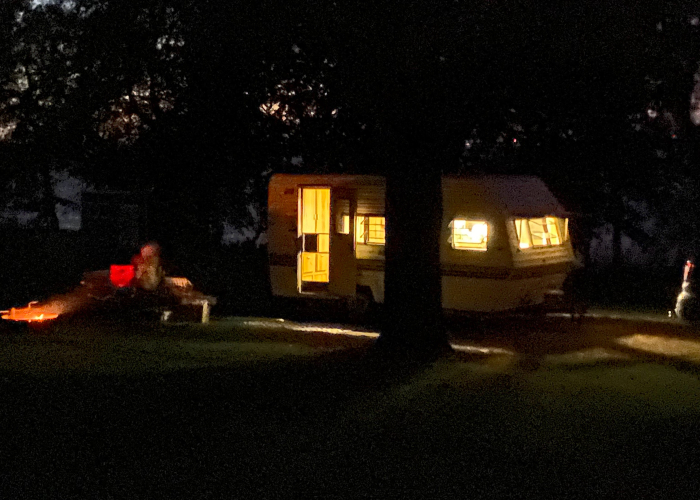 It was a little walk to facilities. There were a couple of "stinky" pit toilets nearby, which Junah used exactly once! Flush toilets, sinks & showers a little bit more of a walk. I exceeded my "steps" goal three days in a row, and walking to the bathroom was a big part of that, I'm sure!

After dark, we did inside stuff... activity & workbooks, crafty stuff, toys. We both slept pretty well that first night; I had five days off of work and five days of meeting my sleep goal, too! The second night it was lightly raining and that woke me a few times. 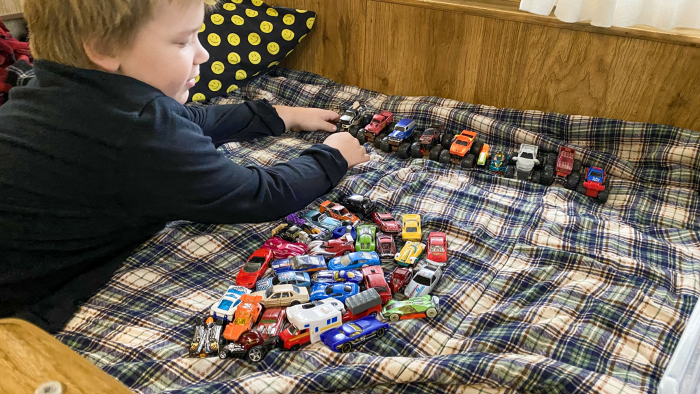 More truck play in the morning, and then we set out to try and find some nearby geocaches. We tried to locate three that were right along the shoreline... and we didn't find a single one! It was fun to look for them, though, including a lot of climbing on & peering around & under rocks.

We regrouped and had ham sandwiches lunch, then set out on a hike to try again. There were three more that I'd identified on my app as "kid friendly," had good hints, and all three had been located by others within the last couple of months. It was a little trek up the escarpment -- there used to be a ski hill there and we hiked up where the old lift used to be, the remnants are still visible (big poles with pulleys attached).

For our first geocache, the hint told us that it was an "ammo can" and "there shouldn't be too many fallen timbers that can accommodate an ammo can." The app doesn't take to you the pinpoint location -- it's within 15-20 feet or so -- so we were looking at a lot of "fallen timbers," not really having a sense of the size of an "ammo can." We're looking and looking, feeling as though we were running out of options, when Junah said, "Hey look! I found a box!" 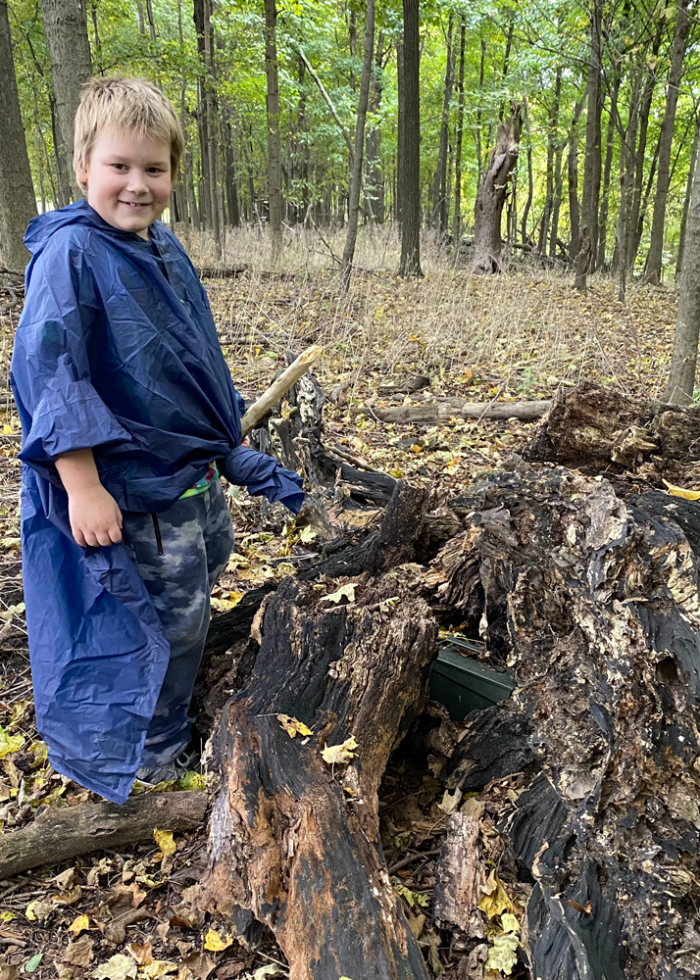 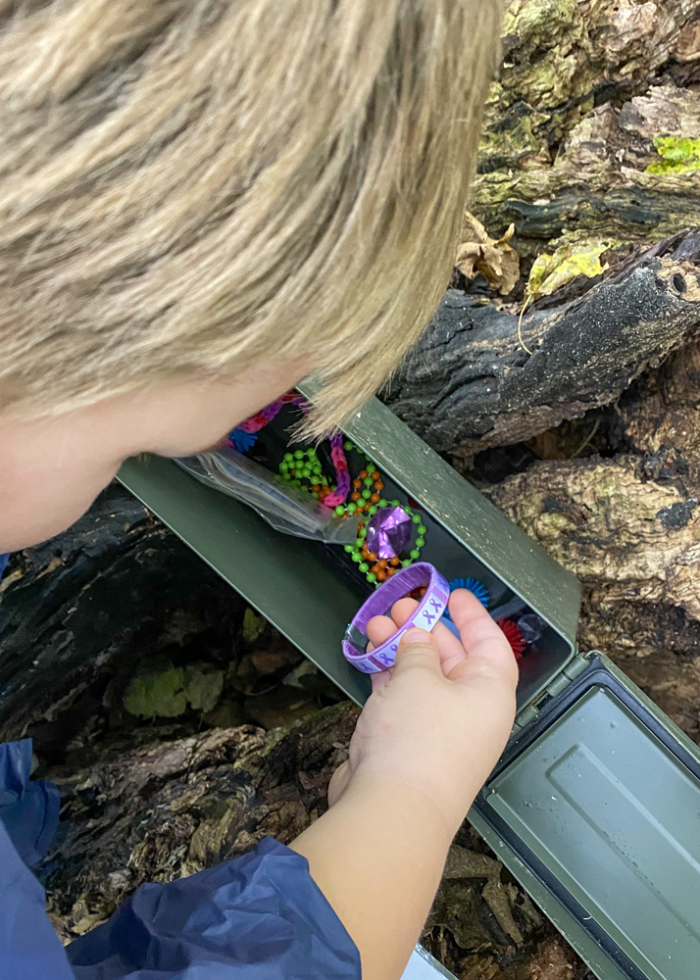 It was a pretty great find! We didn't have anything to trade for goodies within, but we did sign the log and maybe someday we'll return with some loot. 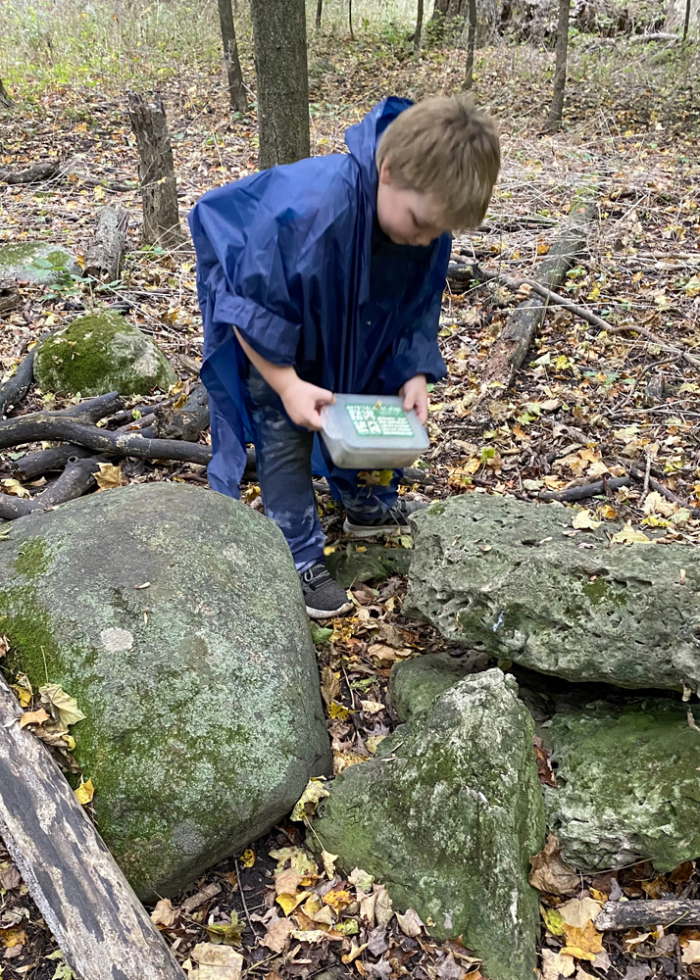 I wish I'd taken a better photo of Find #2. The hint for that one was to follow the rock line, and "in the 'mouth' of the alligator rock." It truly looked like a gator! 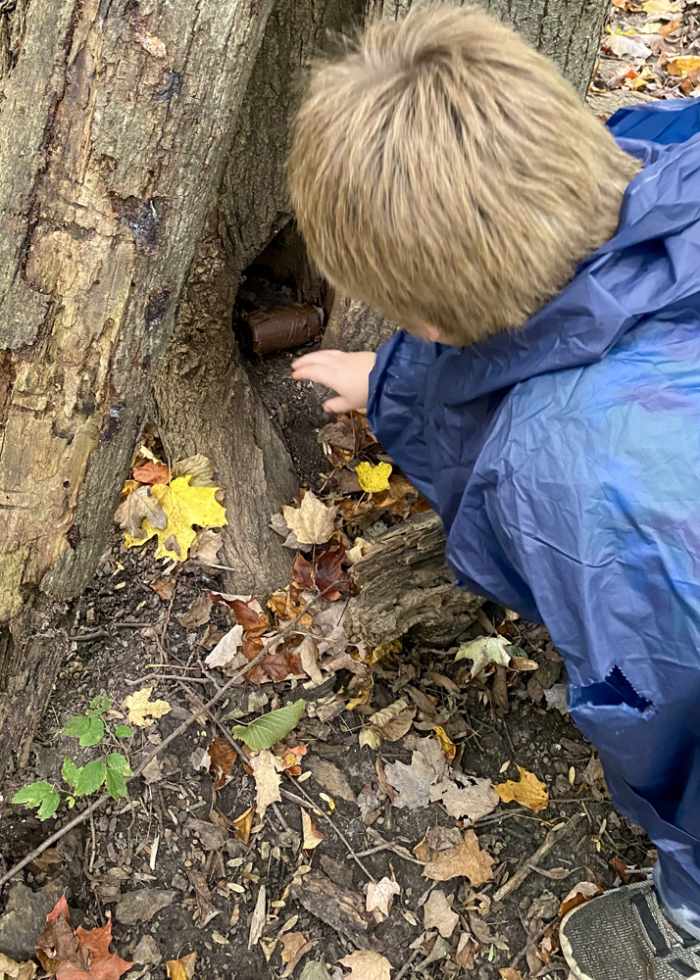 We were getting a little frustrated trying to find the third. The hint was "base of tree," and, well, we were in the woods... but they'd also described the canister, and when I finally spotted a deliberately placed chunk of wood at the base of a tree and saw a hint of brown duct tape, I realized that we'd scored again!

The order in which we found the geocaches was their order in size, from largest to smallest, and in quality... not that any were bad, but that first one was WOW! So glad it was Junah's first-ever find. 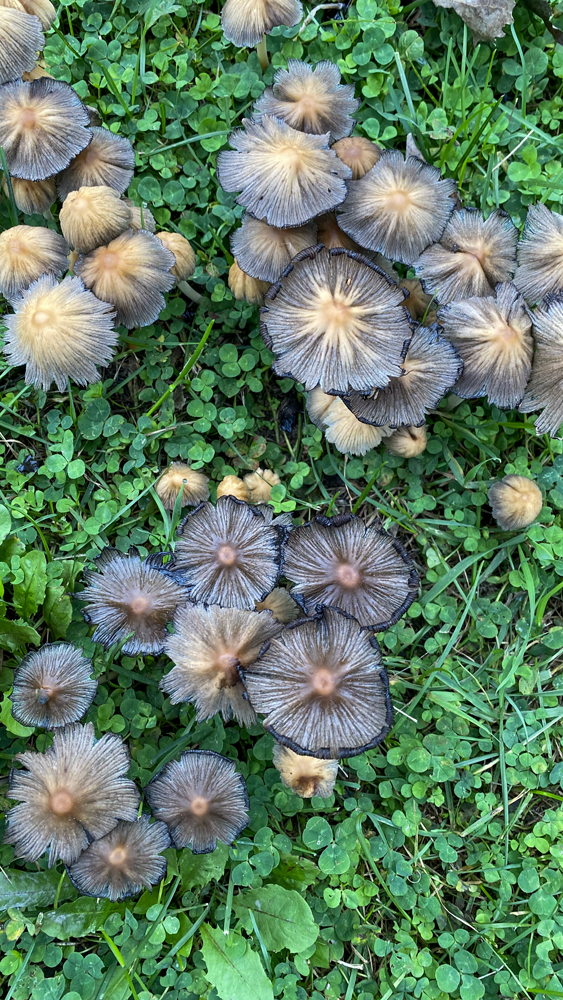 We saw quite a few varieties, but these were my favorite. 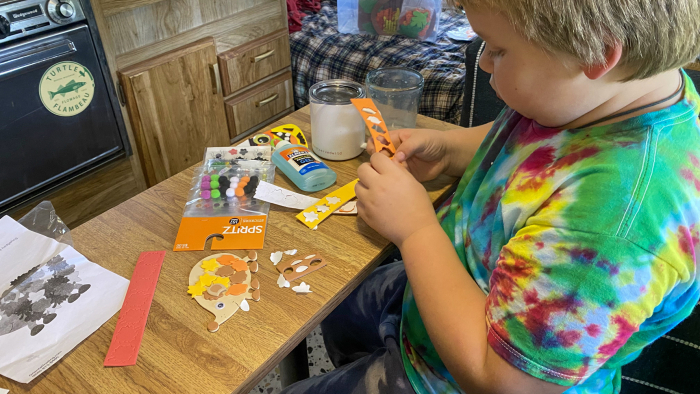 He made quite a few of the crafts that came with the library's fall fundraiser promotion, and we also filled out a nature scavenger hunt page. I will admit that Junah spent a little bit of time each day playing with some "driving" apps on my phone... flying firetrucks and whatnot. It allowed me to take a quick nap one day, and to get to a few tasks... like dishes.

On Saturday night we had a taco/Frito bowl with shredded cheese & sour cream... it was pretty tasty! We built another fire without much difficulty, especially considering that it was drizzly on & off all day, so more s'mores! 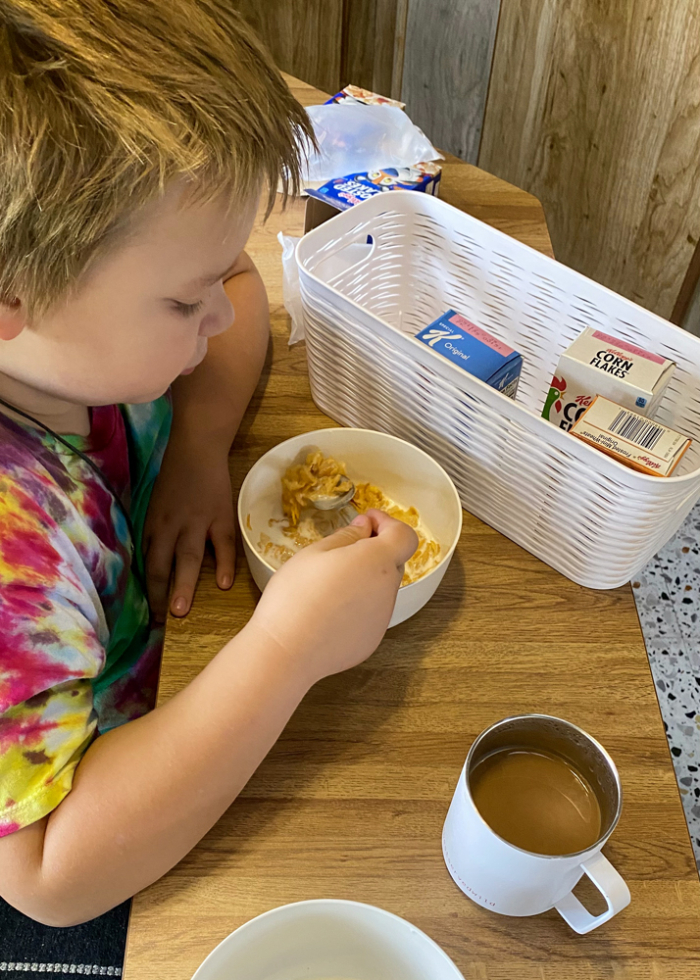 Breakfasts were cereal, though this was a second breakfast... he'd made himself a ham sandwich when he got up! 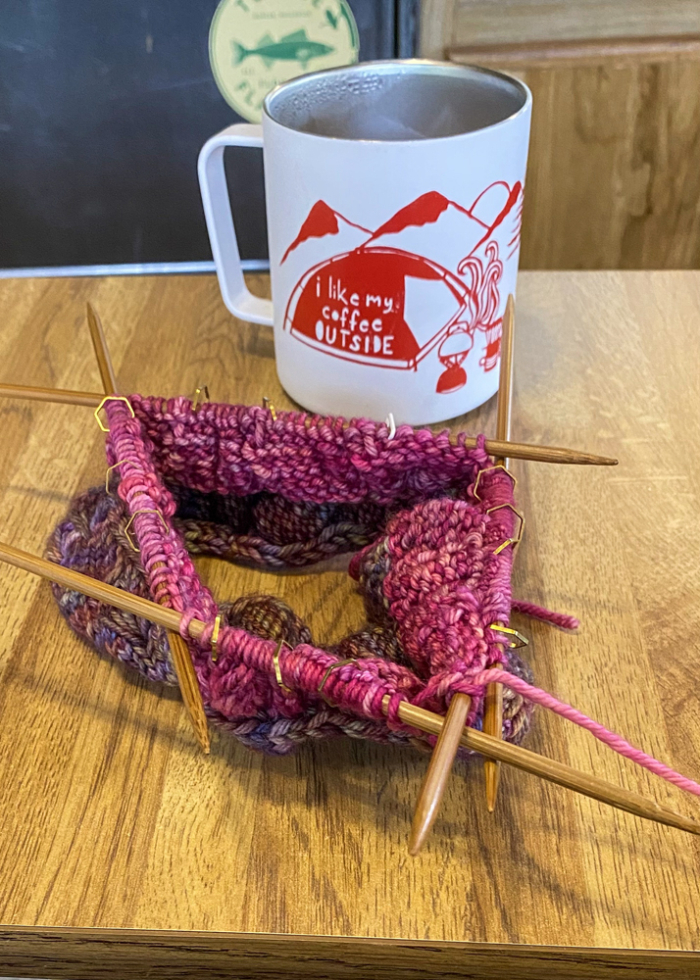 I even took my knitting out of the bag a couple of times and managed maybe a half-dozen rows in all. Ha. Better than nothing.

All in all, it was a fantastic excursion, and I can't wait to do it some more next summer.

This sounds like a wonderful trip and I think it's a time that Junah will always remember!

What a wonderful experience for the two of you! Life long memories for sure. I am beyond impressed with you doing it all…driving with the trailer, set up, and all! I have camped in tents, tent trailers and trailers…it can be a LOT of work! Bravo!👏

Congratulations on your very successful camping trip! Great backing up, good food, found geocaches - it sounds like an excursion that made wonderful memories for Junah (and you)!

What a terrific outing, including the fancy parking without assistance! Clearly, camping will be one-on-one time, which probably makes it extra special.

I loved reading about your camping trip with Junah and the fact you did it all by yourself is very impressive. Backing up a towed vehicle is definitely tricky. Would it help if you had a full hook up site or at least water and electricity? An electric kettle is a good idea.

We've never taken our grandkids on a full on RV trip but sometimes when we are in LA they spend the night with us and they talk about it now and then as something they loved and will remember.

We have a geocache site on our property installed by our son in law and the kids. It's in a reflector on a post at the head of the trail going down to the beach. Using a large drill head, they drilled out behind the reflector and put in a larger pill bottle with paper and pencil. Whenever they visit they check it out to be sure it's still there. People log into the geocache site and note that they've found the site.. When they visit, they all like to go on hikes to find other sites in the general area.

Your grandchildren are wonderful.

I love this all so much! I think geocaching sounds like great fun. I would have loved it as a kid! Such excitement at finding a treasure! What a great activity for the two of you. I'm so happy your trip was such a great success. (Y'know . . . it won't be very long and Junah will be a great helper in setting up camp.)

What a special treat for both you and Junah! Occupying a boy of his age is not aways easy, but it looks like you did a wonderful job! You are an amazing grandmother!! ❤️

I love every bit of this! What fun! I especially love the "sneak photos"... so much! But Ducky all lit up at night... perfect!

This sounds like such a fun trip! You are wise to take these shorter trips with one other person and to make notes on what works and what doesn't.

That sounds like such a wonderful time Vicki! Jun looks so happy. (the hiking back part cracked me up). Yay for you backing the trailer up...something I cannot do!

Sounds fabulous! I am not sure I would have the ability to back our camper into a space. We do love camping with our granddaughters.

You are THE BEST grandmother!!!

what a fantastic trip! I'm in total awe of your camping abilities - and just love how well you and Jun worked together to make it fun.