Museum of Me: Welcome!

Last month, Kym introduced her Museum of Me and that kind of stuff is right up my alley, so I'm joining in (and doing a little catching up)! 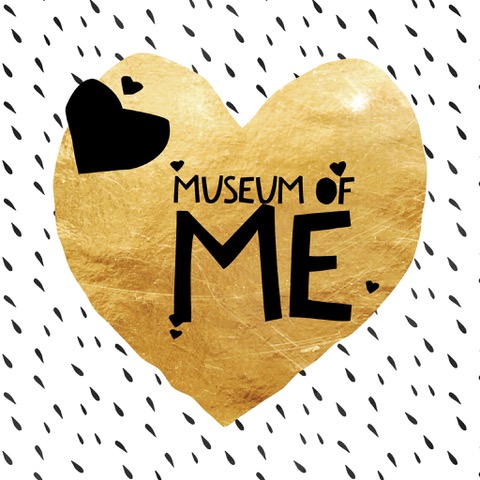 The inaugural exhibit is:

The Oldest Thing From My Childhood Still In My Possession 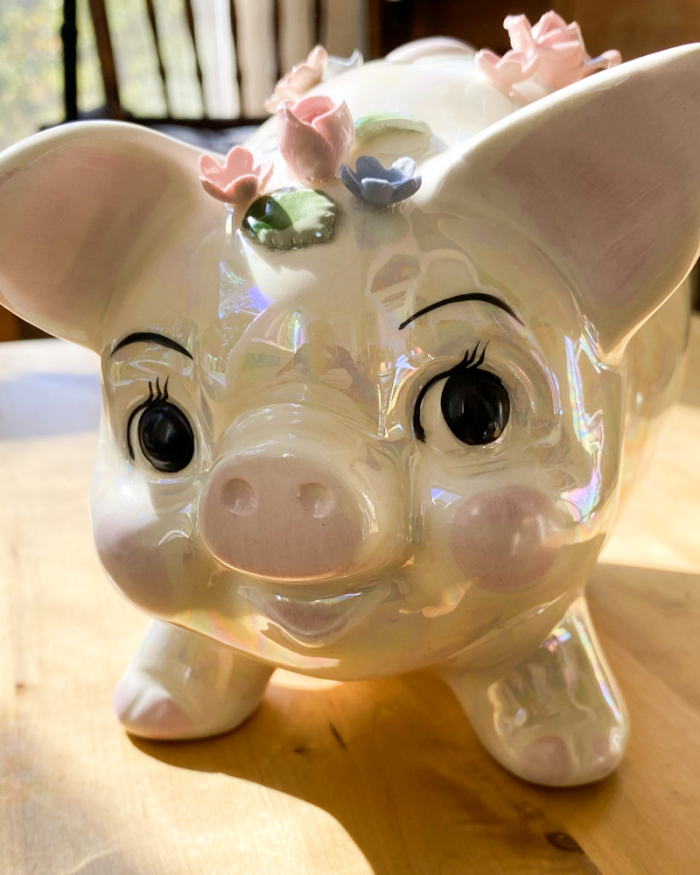 Like Kym, the backstory is fuzzy... I know she was a gift, and I think it was for my 6th birthday, but I don't remember from whom. 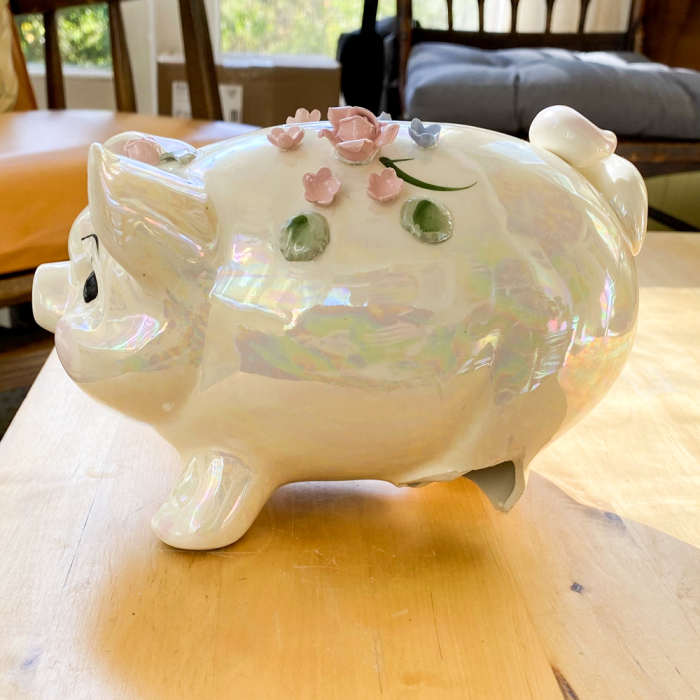 I do know that she was maimed almost immediately! Like, within minutes. It could have been me that dropped her, but the depths of my memory tell me that it was one of my three (at the time) siblings and the fireplace hearth also plays in that memory. 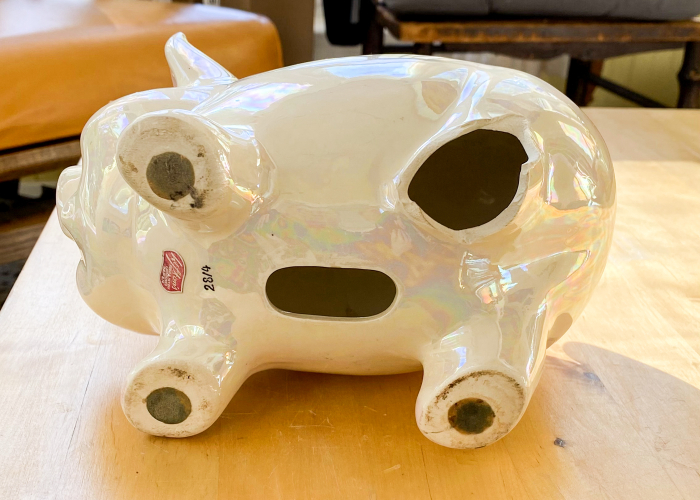 So, y'know, she's never been very good at holding money. I did keep the rubber stopper in there for YEARS, even though any money deposited could (and often would) fall right through her missing leg. 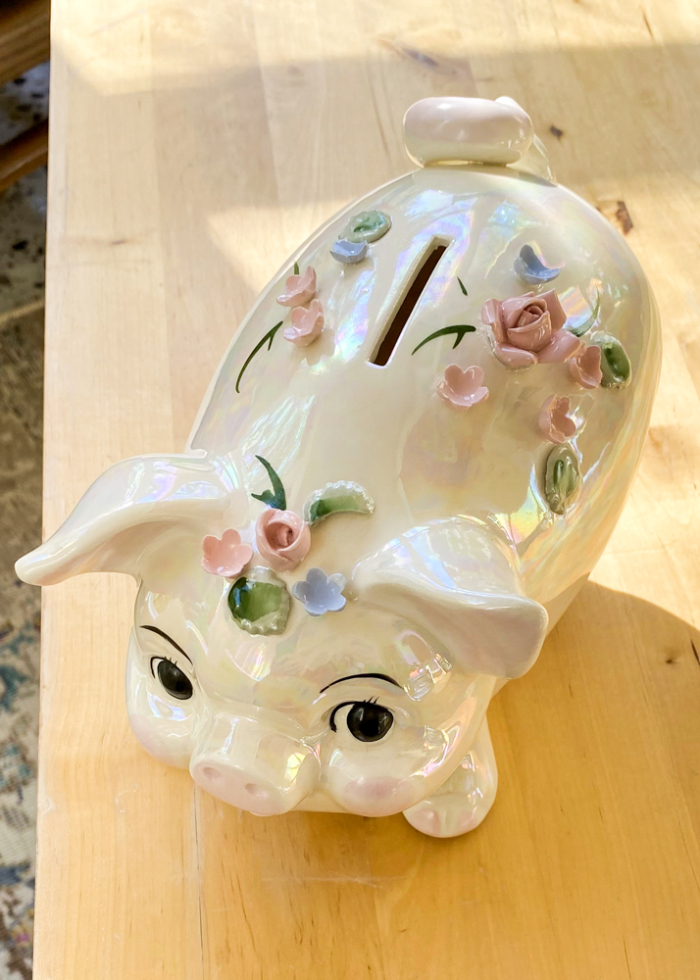 She's always been sure-footed, though, even with only three legs. And from some angles, you can't even tell that she's damaged. 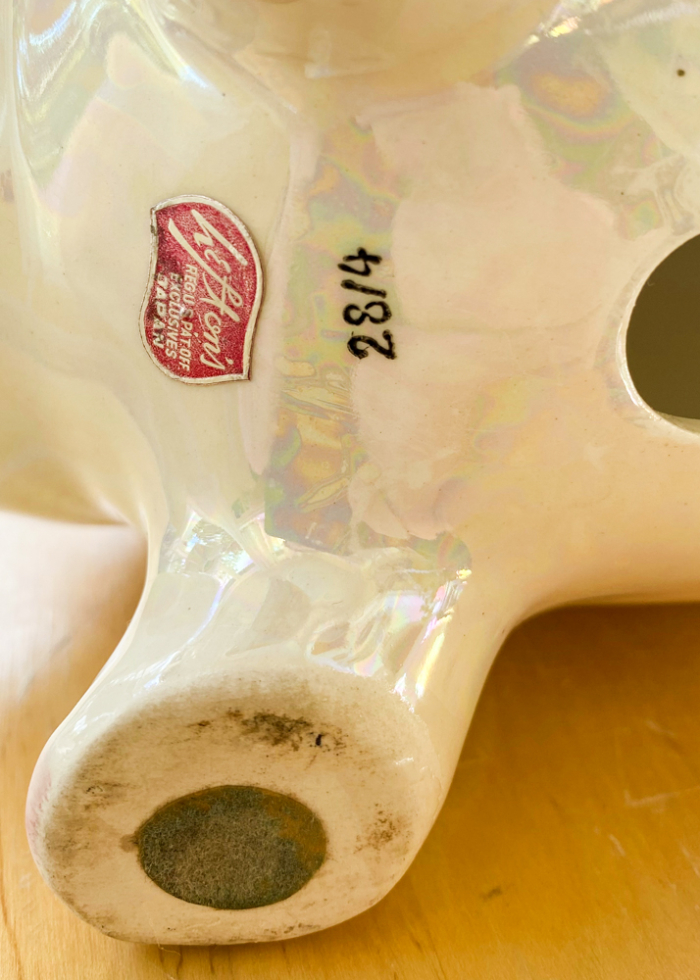 I gave her a bath for these photos, as I've done from time to time, and I'm always very careful to preserve the Lefton sticker. There are little felt disks on the bottom of each foot, too. 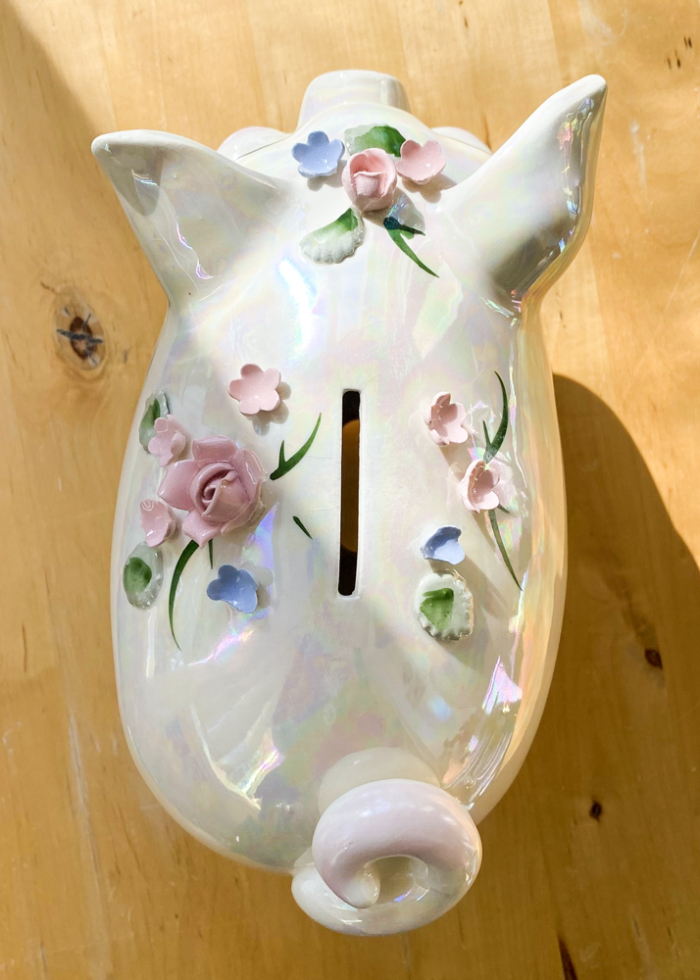 Some of her floral decorations have been damaged, but none is missing altogether. 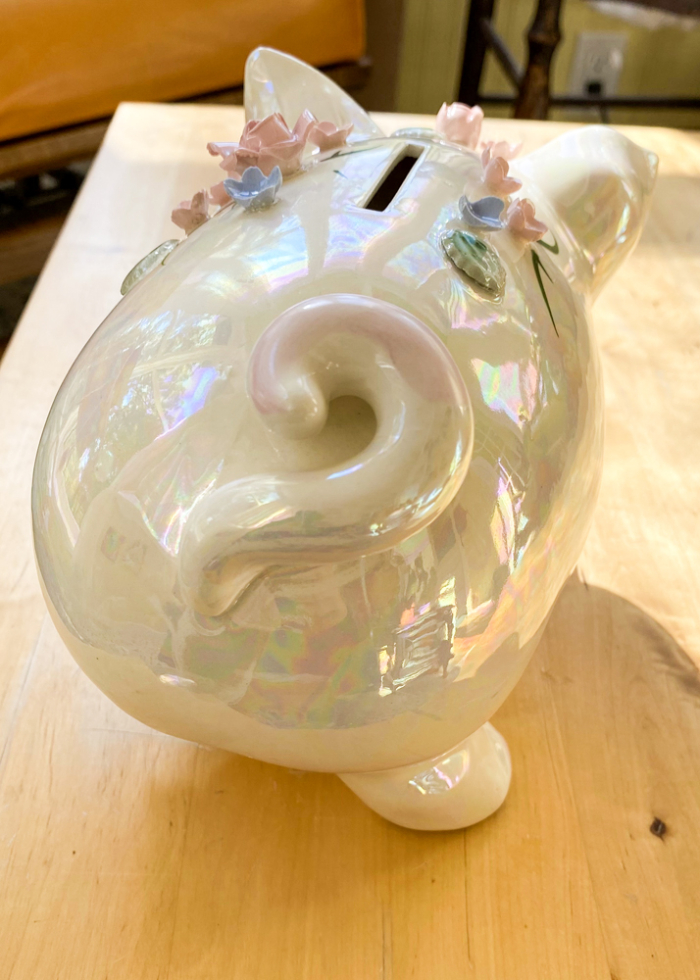 The curl of the tail, the iridescent glaze... 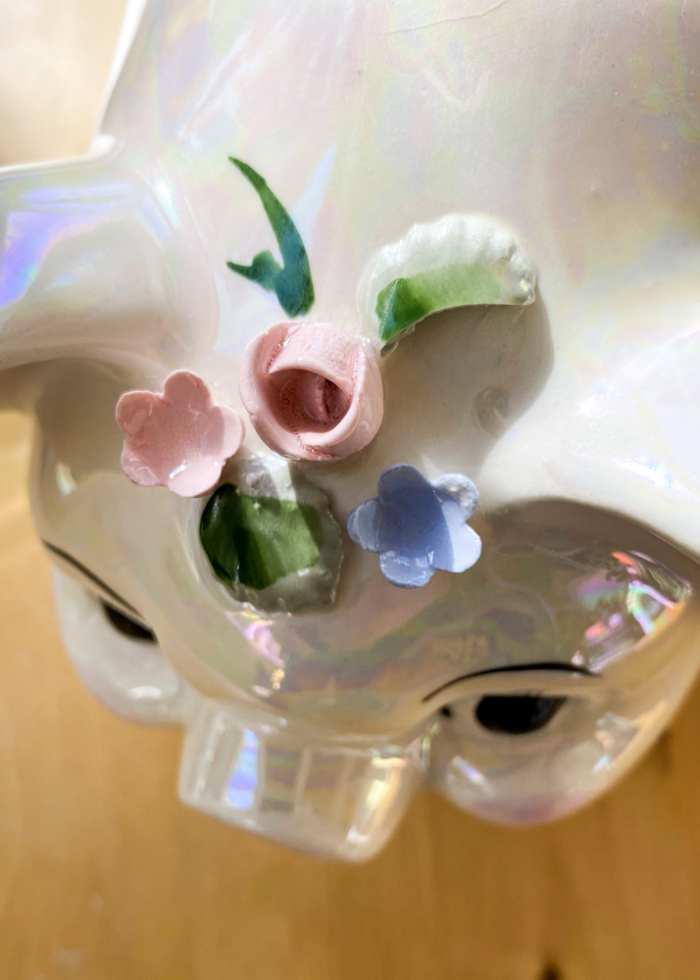 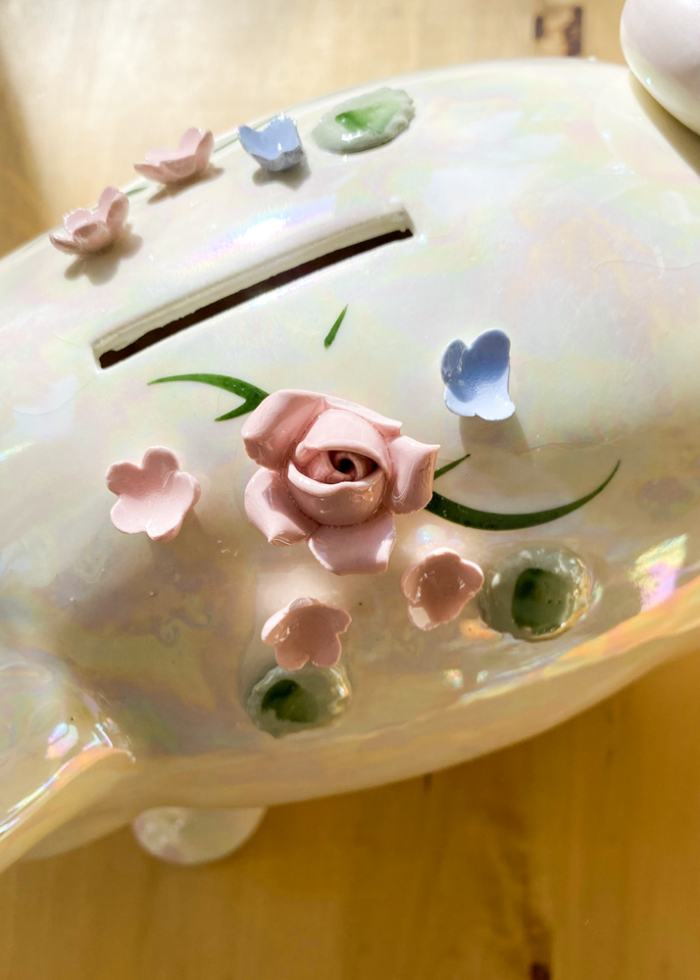 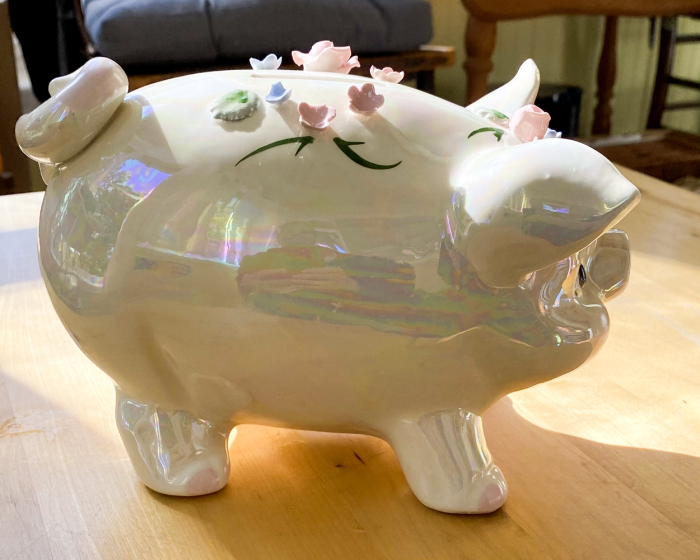 A quick search on eBay and Etsy resulted in a few very similar -- sometimes much more decorated (either originally or after-market), but I will always like mine the best! 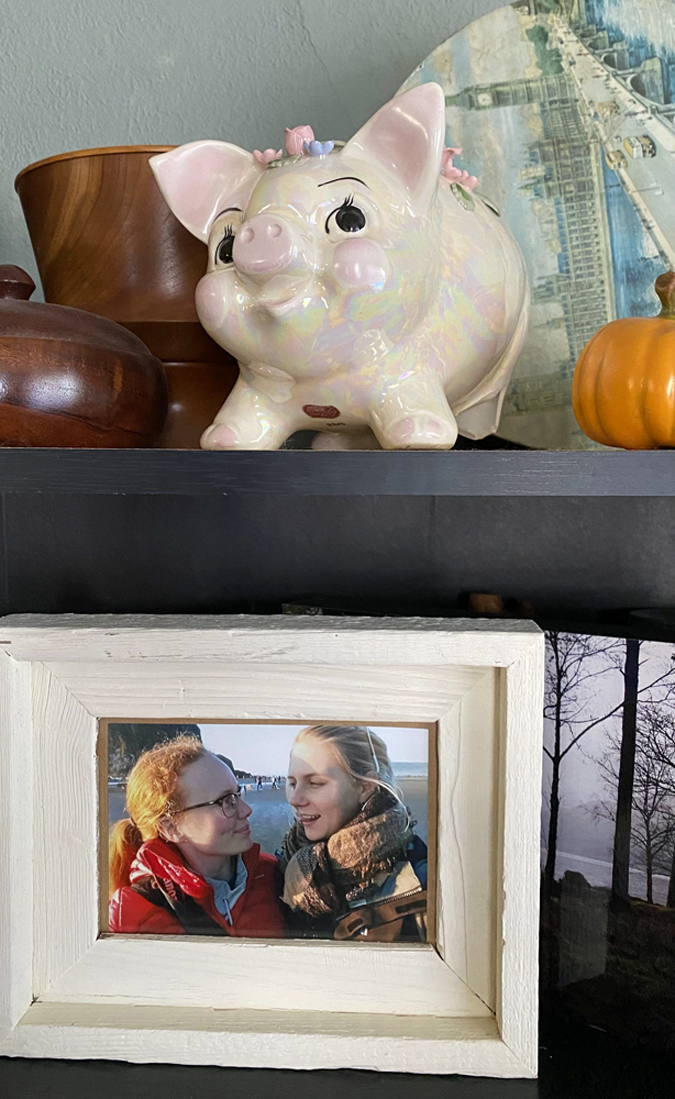 And here she is in situ on the top of a bookshelf next to some of my dad's turned wood vessels, a sideways Big Ben/Parliament cookie tin that was Rusty's mom's "sewing basket," a ceramic pumpkin that my Grandma Blum made, and on the shelf right above a photo of Viv & Maddy, and one that I took 10 years ago in Scotland. (There is much museum fodder on those shelves!) 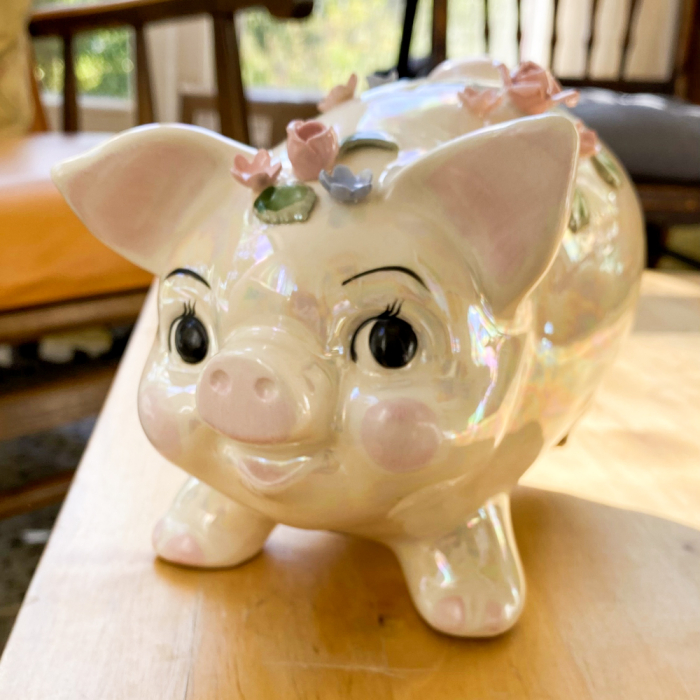 That face, though (even in a blurry photo).

I'm so happy to visit the Museum of Vicki and your inaugural exhibit is wonderful! I love that you've kept and treasured her despite her three-leggedness. Her sweet expression, lovely flowers, and that glaze all add to her charm. And she's certainly displayed with other great museum pieces. I look forward to more of your exhibits!

She's a treasure, for sure! Thanks for taking all of those photos and detail shots for us and telling us about her.

That is an amazing little treasure! I have some similar memories of siblings damaging gifts. How fun that you are joining the Museum of Me exhibits.

Oh! I love your little piggy bank! And what a sweet story . . . I'm so glad you've kept the little piglet, despite the (ahem) imperfection. (Which, in my opinion, adds to her charm!) I can't wait to take in more of your exhibits, Vicki. XO (And I love that photo of Maddie and Viv.)

Well, this is just too fun! What a sweet face she has! (and I truly love that you kept her despite her "accident"!!)

She has a very sweet face that more than makes up for her utter failure as a bank! (Though I won't hold that against her -- it's hard to hold onto your insides when you're missing an entire limb!)

If she can still stand on three legs, she was built to last, huh? So much for sibling-induced damage.

What a sweet little piggie!! Even with a busted leg. I love the flowers on her!

Well loved treasures have battle scars and stories but your little piggy has weathered it all. You have kept her safe and that first bit of damage likely taught you to take extra care of her. She's a lovely exhibit #1!.

I'm enjoying these Museum of Me posts so much! your pig is adorable, and I hope you'll feature some of the other treasures on the shelves where she sits in future posts!!

What a wonderful visit to your museum and no walking required. The docent is very knowledgable and the items on display are intriging.