The light was pretty great on Friday afternoon and I had a sudden urge to take my hexie blanket outside for a photo -- seemed like it had been a while. 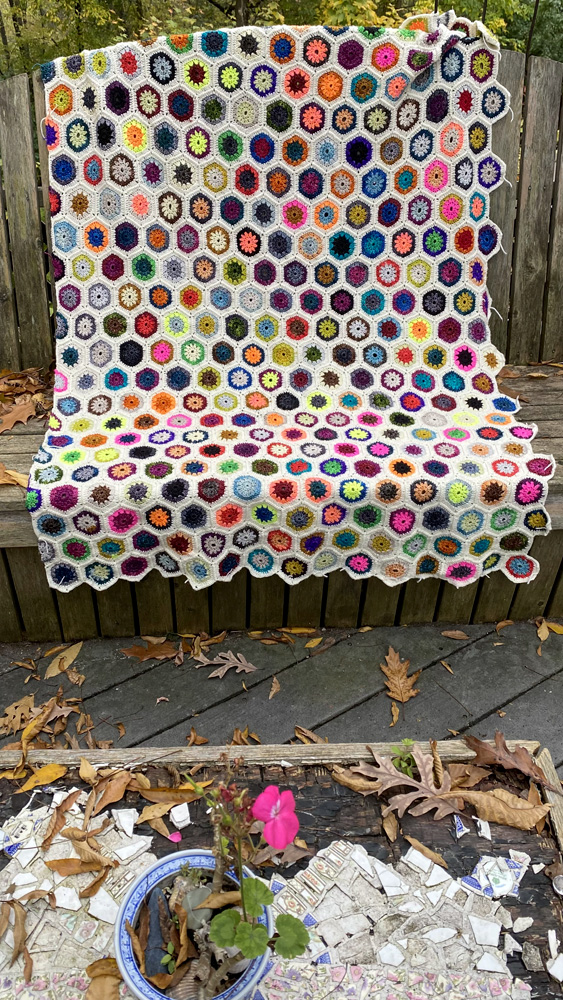 As you can see, it's getting "leafy" around here. (Also that my mosaic table is returning to dust right before our very eyes.) I love how that little pink geranium blossom so perfectly matches the hot pink in the blanket! 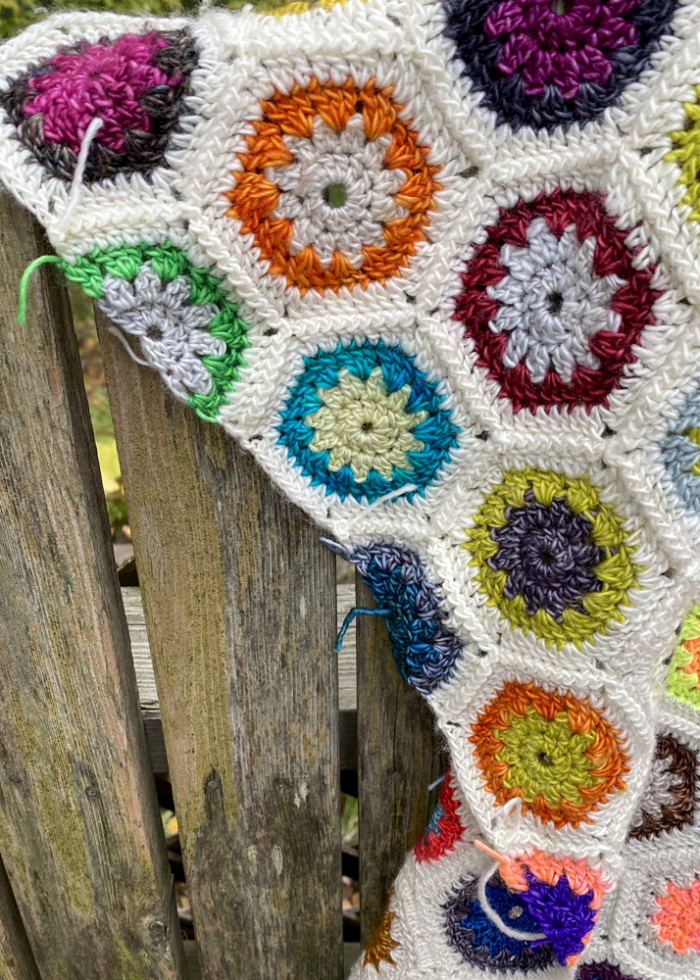 The occasion was to celebrate finishing the half-hexies along one side. As of this writing, I'm about half-way on the other side. I'm ready to go with this baby!

Before I forget, I was going to start an Autumn/Vacation/Winter/Holiday Knitting To-do List (so I won't forget):

We'll soon be going up to the North Shore for a long weekend and that first item is Vacation Knitting Project Priority #1! When one of Rusty's customers found out that I'm a knitter, she asked if I would knit a stocking for her grandson. Her mother knit stockings from a vintage pattern for all the previous grandchildren, but passed away before she could do Sebastian's... so he's been sharing with a sibling! I don't volunteer my knitting time for others very often, simply because it's so very limited, but this one tugged at my heart. I'd like to deliver it before Thanksgiving.

Ali messaged me early on Saturday asking me to turn off online ordering for the coffee shop at 11... they were short-staffed and she had to close at 11:30 instead of 2 that day. A few weeks ago, trying to delete an item from my Make.Do category in the POS app that Ali uses, I accidentally deleted THE ENTIRE CATEGORY! So I took advantage of her early closing to go up and rescan/re-enter every single item that I have up there! It took about three hours, but it's done and I can clean up some other things because of it. 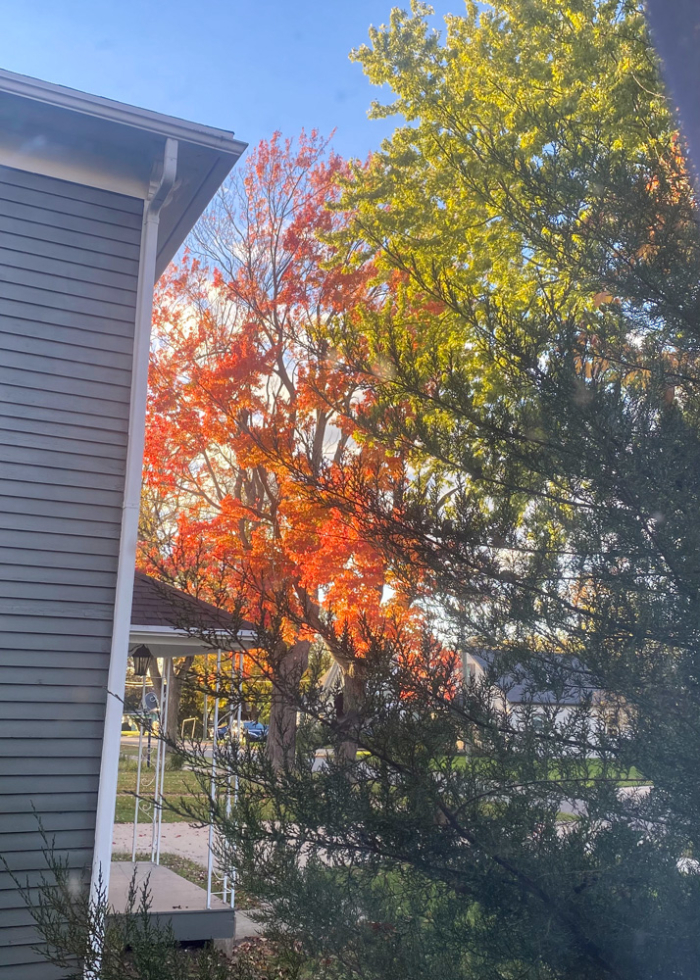 When I returned home, I was in my workroom for a few minutes and was distracted by this glowing tree a couple of doors down. A photo taken through two (dirty) panes of wavy old glass doesn't do it justice... it was a brilliant & gorgeous distraction!

Ann's Airbnb guests checked out early Sunday morning, headed to Lambeau Field early! They were aiming to do some tailgating and snag a few brats prior to the game, then planned to head right to a hotel in Milwaukee after the game in order to catch early Monday morning flights home. Anyway, I took advantage of that and went over to get a start on laundry. I threw in one load, ran to the store, went back to toss the fist load into the dryer & throw in another, watched some pre-game TV until that was finished, then loaded it all up (except for towels, which I left in the dryer) to take home & hang on the clothesline! So nice to have that chore done.

My guests drove from Michigan and checked out this morning... so more laundry is on the horizon!

Speaking of football, it was a fun game to watch and we WON! Packers now stand at 6-1 and at the top of their division. 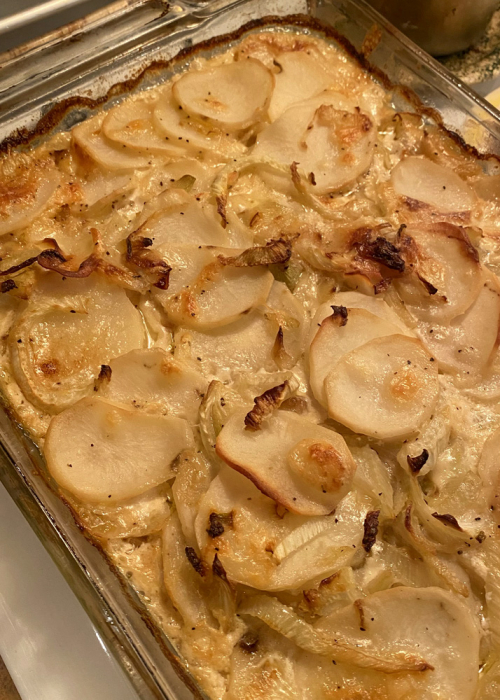 There was a huge fennel bulb in our last CSA share (the last of the season), along with some potatoes (and apples and beets... that was a heavy bag!), so I searched for a fennel recipe and came up with one that used potatoes, too. Kym shared that the NY Times Cooking app is her favorite these days, and I second that motion! Right up there is anything Ina Garten/Barefoot Contessa, and that's where I found the recipe for the Potato-Fennel Gratin pictured above. It was delicious!

Your hexie blanket, a glowing tree, and good food do all make for a good weekend! That Christmas stocking is probably knit with worsted so I hope it goes quickly. That tugs at my heartstrings also!

Delicious, productive and (if that tree is any measure) beautiful weekend. Doesn't get much better than that. I'm +1 on the the NYTCooking and Ina as fab resources.

The blanket is just spectacular! (and so are those potatoes!) A few years ago I finished a stocking for a friend. Her mom had started it but didn't finish it before she died. It was a lot of pressure to get it just right but I'm so glad I was able to do it for her.

There are so many good things in your post, Vicki! But that Potato-Fennel Gratin is just . . . omg . . . calling my name. YUM! I love the hexie blanket, I'm sort of distraught over the mosaic table (it's always been a Favorite Thing of mine), the glowing tree is a stunner, and I hope you'll share the Christmas stocking (which is the sweetest story of the day). Here's to a great week! XOXO

That potato-fennel gratin... oh my! And I love the half hexies! They are too stinking cute!

what a fantastic couple of days (which looks more like what I might do over the course of a week or so?!) Hexies!!! and that gratin - wow!!

There is so much to love in this post! The blanket never fails to inspire me -- sometimes I think I want to make my own, but then I think about all the ends and am glad that I can just watch you do it!

I love the fennel added to what we know as Funeral Potatoes. :)
Who knew that a crochet pattern from the past would become such an epic classic. You've taken it to a new level with the half-hexies. The finish is in sight and it's gorgeous!

I'm not sure that I would have the patience for that blanket, but it's stunning!!! Those potatoes....Mmmm!