Lucky 13! Thirteen is also a Fibonacci number, a prime number, a star number, and a happy number (among other things, and thank you very much Wikipedia). That's all good enough for me as I embark on the 13th year of NaBloPoMo!

It was a pretty great weekend! We went to an art opening, put together a futon couch/bed at Ann's Queen Anne, cleaned up and pulled in plants from outside, and got a start on both Airbnbs as there are guests arriving later this week at both. 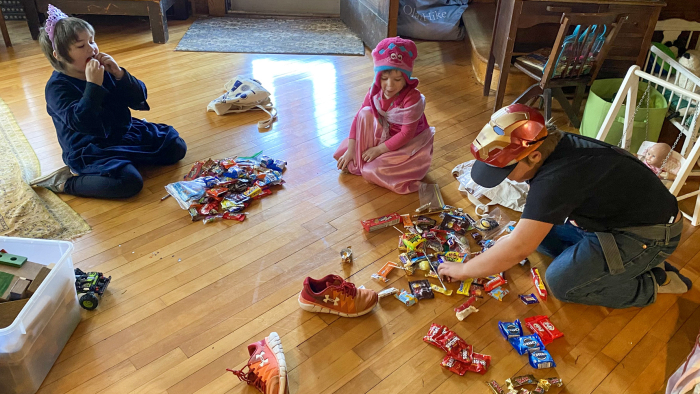 The kiddos stopped over yesterday after Trick or Treat Round 1, enjoyed sorting and eating (or trading/giving away) some of their treats, and then I took Jün & Gin out for Round 2 in my neighborhood. There weren't a lot of houses with lights on (I didn't have a single kid at my door, other than my own grandkids), but they came back with plenty of goodies. To their delight, most people said, "Take as many as you want!" 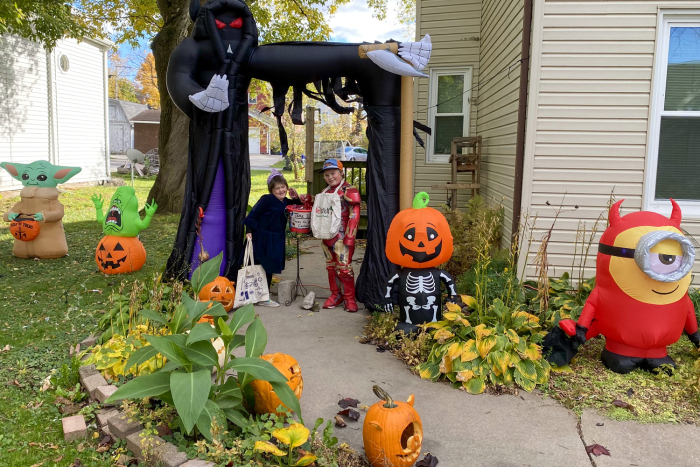 This house, a couple of blocks from mine, is probably the most decorated in the area. At night they had big swirling bats projected on the house and it was really cool. 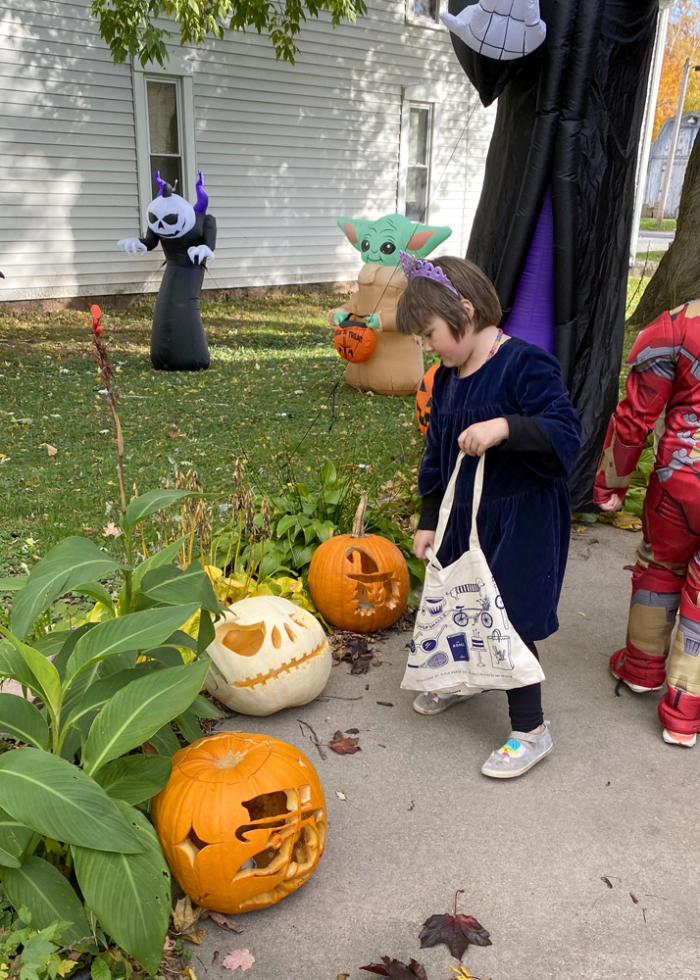 Ginny was originally a witch but it was so windy yesterday that her big-brimmed hat kept blowing off, so she traded it for a tiara!

I look forward to a post from you every day in November! A tiara is often a better choice than a witch's hat (but it's a good idea to keep the witch's hat handy, just in case!)

It's so fun to see kids enjoying trick or treating! We had 2 besides Jackie and now we have loads of leftover candy. I admire your commitment to NaBloPoMo!

I'll enjoy seeing and reading your daily posts! Those kids!! Gin in a tiara just seems so right! LOL

Purple Tiara for the WIN! :)

We have that same tiara in our dress up box, probably a few of them as we have 5 granddaughters. Your grands are adorable. And how lucky you are to have them close. Ours live 3 and 5 hours away.

13 years ... I applaud your enthusiasm! and Gin's practicality for adopting a tiara in place of a pointed hat :-) we had exactly two kids - from the same family. thankfully we had FaceTime with the little boys (dressed as ninjas) who were having a BALL!

Looking forward to NaBloPoMo with you! And really, don't we all have a little trouble deciding if some days are a tiara day or a witch's hat day? I definitely do.

Who says witches can't also be princesses? Glad to see that they came home with a good haul!

Brava to you as you embark on NaBloPoMo #13!!

That is a thing of wonder! (as are those adorable kiddos in costumes!)

I forgot about NaBloPoMo! I will be here to read every post and I hope to comment on every single one, too. I have been a bad blog friend/commenter/reader and will work on being better! Halloween is perfect for kids the age of Gin and Jün and fun for you, too!

Love the Halloween pix. No trick or treaters here either. I'm catching up on blog reading.