So, first the snafu referenced the other day...

I recently shared a great karma Airbnb story about a couple moving to the area and staying with us. We have a lot in common, and they're great people! We met in passing a couple of times and had frequent, friendly communication while they were here. Originally booked Friday-Wednesday, they inquired about extending their stay by about three days, but I was only able to offer them one because of the impending arrival of football fans for the weekend. The new checkout date was Thursday; I saw that afternoon that they'd left a review, and Airbnb prodded me to reciprocate. I left work on Thursday, stopping at the grocery store for supplies for both properties, planning to head right upstairs and get started on laundry/cleaning... and my heart dropped as I rounded the corner to home and saw their car in the driveway! I sent them a text, and among other things asked if I could run up to talk with them... what's going on? Before I even went upstairs, I texted the important people at work to see if I could get most of Friday morning off. New to Airbnb and a bit frazzled by their house situation (purchased via a friend, sight unseen), overwhelmed by things that need to be done there, it was just a big mix-up/misunderstanding. Of course, they were mortified, but willing to leave right away if they had to! It worked out to have Friday morning off, so I didn't have to kick them out on the spot, and luckily they were planning to make their exit by 7:30 am because of an appointment. This is where I thank past-me for having extras of most of the important things... mattress pads, sheets, duvet covers, towels, etc. It all worked out, but WHEW!!

Originally, I was going to have the girls overnight on Friday, but by then I was frazzled, too, and still had to finish readying Ann's house, so we postponed the sleepover date until Saturday.

I drove out to get them in the afternoon and was about to leave the house when I received this note: 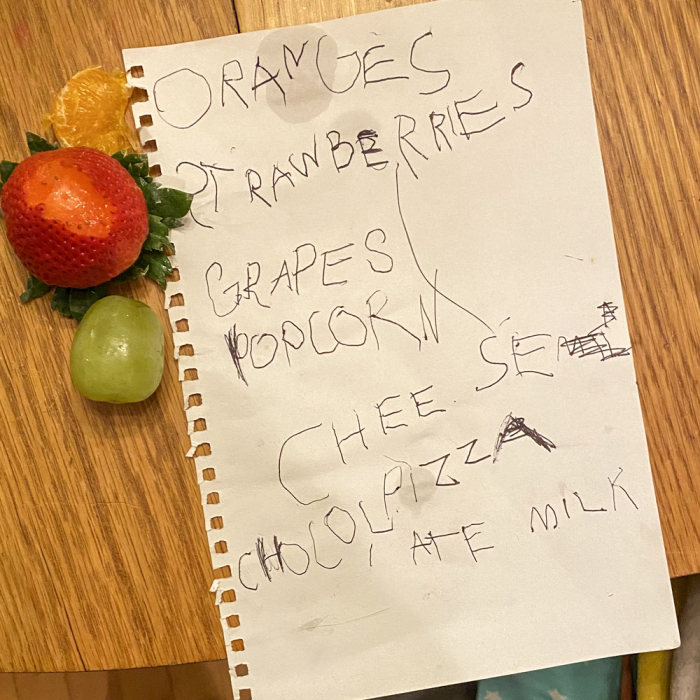 Ali wrote, "They come with demands!" So I stopped at the store on the way, and we ate all those things between Saturday night & Sunday afternoon, along with lots of playing and watching a couple of shows/movies.

Ginny was the first to wake (two whole hours before Malina) and immediately spotted snow on the garage roof. Ali & I completely forgot about the forecast for snow, so the girls weren't really prepared. In fact, lately Malina's been wearing whatever shoes are closest to her feet and they don't always match, so she had one slip-on and one very strappy sandal, but luckily she always has an extra pair or two at my house (often switching when she's over). Ginny couldn't wait and had to get out there, so I bundled her up as best I could -- it wasn't super cold outside! 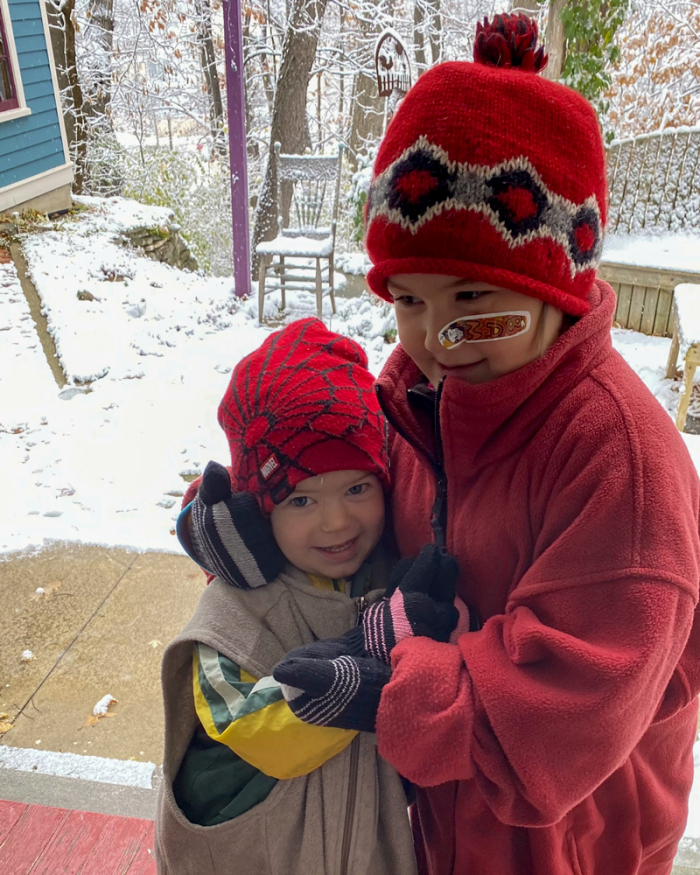 And eventually Malina, too! 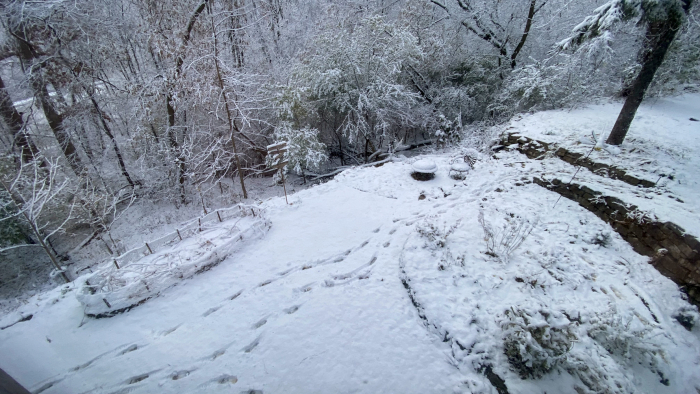 It wasn't long before the pristine snow in the backyard looked like this -- and many more tracks by the end of the day! It was so fun to watch them... 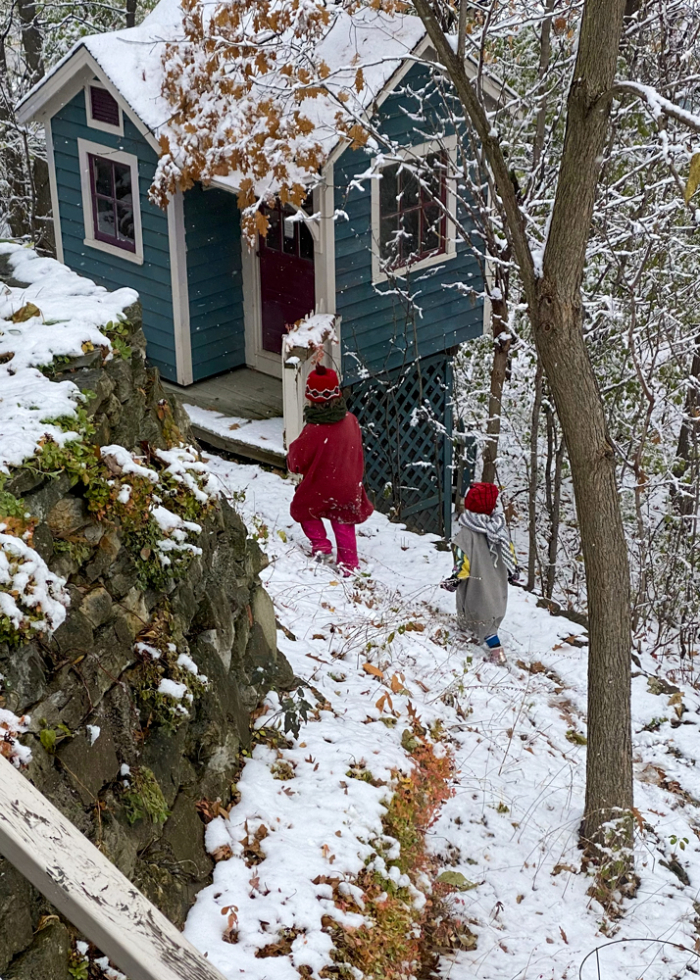 It snowed lightly on & off all day, which was also super fun for our football fans -- there's nothing like a little football in the snow at Lambeau Field! (And there's still snow on the ground this morning.) 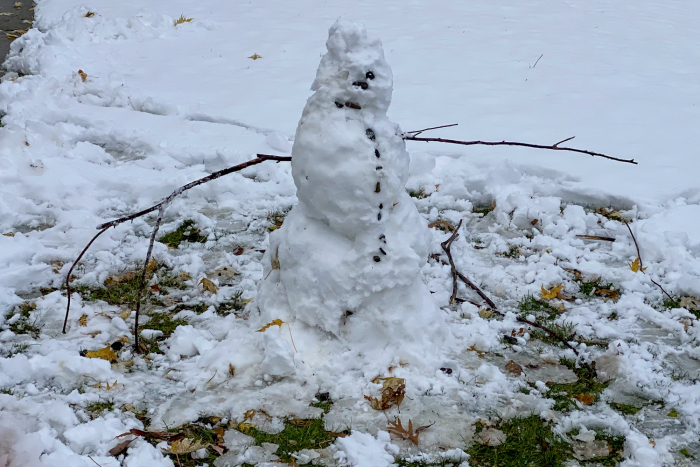 It was sticky, heavy snow, so we even got our first snowman of the year!

Your weekend sounds totally exhausting but also invigorating! Children's footprints in the snow are so precious and their snowman is the perfect first snowman of the year!

I'm a little frazzled just reading this, but glad it all worked out! Those are pretty good demands and I love how Ginny and Malina are bundled up. That is one great snowman!

Oh whew on that close call! I don't think I would have handled that situation very gracefully or nicely! Love the snowman and the picture of the girls so bundled up is magnificent!

I feel you should get extra points just for the right and left mittens matching!

I hope after all the excitement of this fun weekend you had a day off to rest and recover!

There's nothing better than watching kids play in the snow. It's a good thing you had stuff on hand to bundle the girls up so they could play in it!

Sounds like a whirlwind of a weekend but also fun and I'm glad the AirBnb situation worked out!

I had so much fun watching our young neighbors (probably around the same ages as your girls) play in the first snow of the year on Saturday. They made a snowman that looked much like yours -- with a fair amount of dancing around it, which was charming. I love kids + snow! It sounds like you had QUITE a busy time with your AirBnB(s). You truly are a host-with-the-most! XO

I have a friend who has an air b&b and she has had to remind people a few times about check out time. That would be hard but thank goodness you were well prepared.

SNOW!! What kid can resist it. Your actions for the BnB couple were heroic!