We arrived at our cabin on the North Shore of Lake Superior last night at around 5:30 or so. We're staying at a place called Breezy Point and, well, last night we could certainly understand that moniker!

We had a quiet evening in, after having a late lunch in Chippewa Falls on the way... just snacked and chatted and watched some big lit-up lake boats go by.

This morning it was much calmer... I slept in a little (HELLO, VACATION!) and woke up to sunlight reflected on the lake. Whoa, brightness! And solar gain throughout the day... it was 79 in the cabin at one point, with the thermostat set to 60F.

We hung out in the cabin for most of the day. Rusty was doing some drawing/writing and I was knitting! I've started the Christmas stocking for Sebas(tian)!

About mid-afternoon we drove to Two Harbors and found a map, scoped out a hiking trail, and hiked down to Agate Beach and looped back through an old neighborhood. Then we went to the hardware/general store -- I needed some colored pencils to do a little charting for the stocking -- and to the grocery store for provisions for tomorrow. It's supposed to be stormy & cold (maybe a little bit of snow), so we're staying in again for most of the day, watching the Packers vs. Vikings (in enemy territory!), and then we'll go for dinner to a very nearby restaurant.

Anyway, after the hardware/grocery stop, we went to McQuades Pub & Grill for an early-ish dinner (we had carry-out from there last year), and then came home to settle in. I had my alarm set so we could watch ISS go over, and then I took a photo of the amazing almost-still-full moon over the lake. 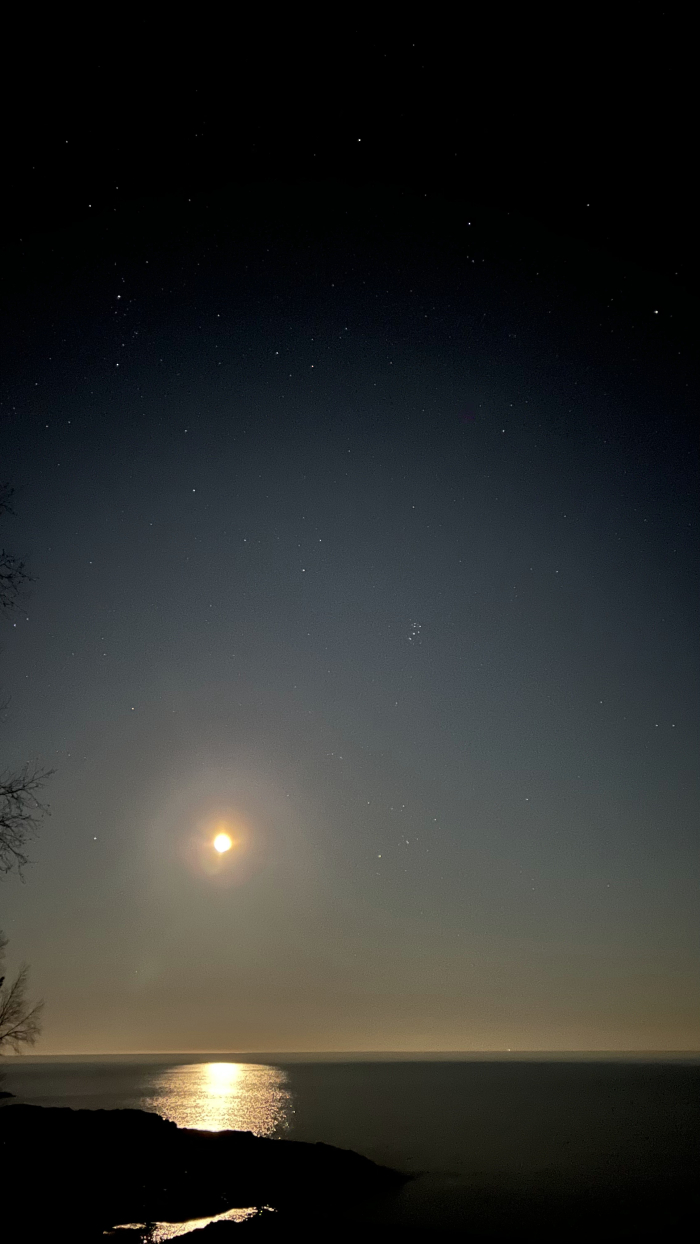 My phone picked up a few stars, too!

I'm glad to hear the sun has been warming things up, especially if it's going to get snowy. Being in a cabin on a lake in the middle of a snowstorm with knitting certainly sounds perfect to me, though!

This sounds (and looks) just perfect!

Do you hit up Kendall's for smoked fish?

THAT VIEW!!!! What a beautiful photo, Vicki! (I never get stars in my photos . . . Those are just awesome.) What a perfect time to be at The Biggest of the Big Lakes! XO

What a wonderful break from your busy schedule. Recharge your battery. Your pic is stunning! I said WOW out loud when I got to it. Continued fun for you and Rusty.

I have been watching your venture on Insta and it looks like heaven! So glad you had a great getaway!