It was a great birthday weekend, with just the right mix of busy & not busy, some accomplishments, and time spent "with" the people most important to me!

But first, another Airbnb story for you because I believe it helped to set the tone (not that the tone of a birthday weekend isn't already great)...

I had a guy booked for a stay in September with his girlfriend, and then he tested positive for Covid and couldn't fly. Rather than canceling and losing most of his $$ (because of options that he chose when he booked), I suggested that he reschedule (which he didn't know was an option). Done! Rescheduled for a stay in November... arriving on Friday the 5th. I sent my usual "here's what's going on" message on Wednesday, per usual... and radio silence. Hm. We'd previously communicated via the app with no issues, and I'm not one to badger, so... I waited... and wondered... did he & his girlfriend break up? He couldn't have tested positive again?? Alas, I finally hear from him early Friday afternoon -- I'm generous in saying that it was hours before they were to check in -- and due an emergency, he couldn't leave and could they reschedule again, or maybe his gf & her mom or a friend could come for a night and at least get something out of it.

My reply was polite, but firm in my disappointment at such late notice because there was no chance I'd have another booking for the weekend, while also understanding that emergencies arise. As an Airbnb user, myself, I'd hate feeling that I'd lost, so I allowed them to reschedule one more time! (Third time's the charm? We'll see in mid-January!!) They were very appreciative and blah blah blah.

I reconciled myself to having the weekend "off," though, truthfully, one of the great things about this Airbnb gig is that there's rarely anything I need to on the weekend except perhaps answer a question. I messaged Rusty to let him know...

And I swear to the goddess, an hour later I had a last-minute booking! Arriving that very day, in fact, and staying a day longer than the original guy. Turns out they're from Southern California, artists/map-makers, around our age, moving to the area, and needing a place to stay while they wait for the moving van and get their new house ready.

You can't make this stuff up!

So, KARMA, BABY!! It comes around... and sometimes you barely have to wait for it!

On Saturday, I had nice chats with Annie (including a sighting of the elusive Mack!) & with Kate; saw Ali for a minute; had chatted a few days earlier with Maddy (time zones y'know). I even had a text from my stepdad... a rare occurrence. My dad didn't always call, but this is the first year that it wasn't even a possibility, so it was really nice to hear from Joe.

We walked down and spent some of my $63.58 (age/birth year) birthday gift from Maddy on Saturday night. The weather continued to be amazing, and we were very comfy sitting outside with outdoor fireplaces and heaters (set on low).

Rusty's been super busy getting things together for the show that's opening in less than two weeks, so he went to do some of that on Sunday morning, and I picked him up on the way out to Ali's. Time to tuck Ducky in good & tight for the winter! 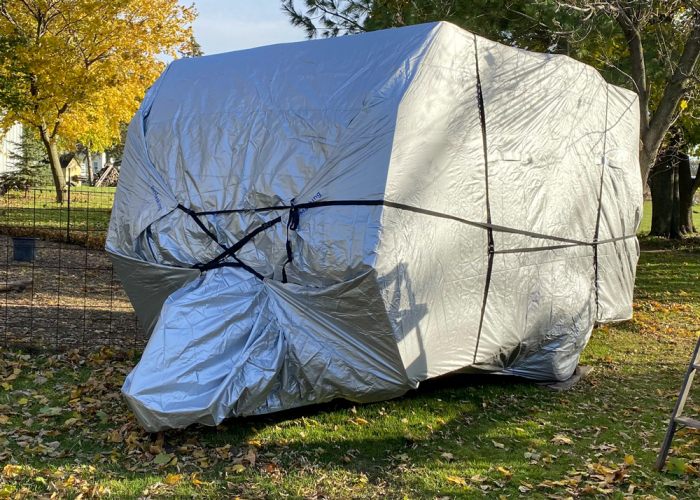 First, I had some things to put in (including mouse deterrent) & things to take out. Last year, we just put a big blue tarp over it and it was OK, but not great -- it's super windy out there and it wasn't in the greatest location, either. This year, I sprung for an actual cover that came with straps and everything! Ducky's tucked between the pole barn & the chicken coop, and it should fare much better. 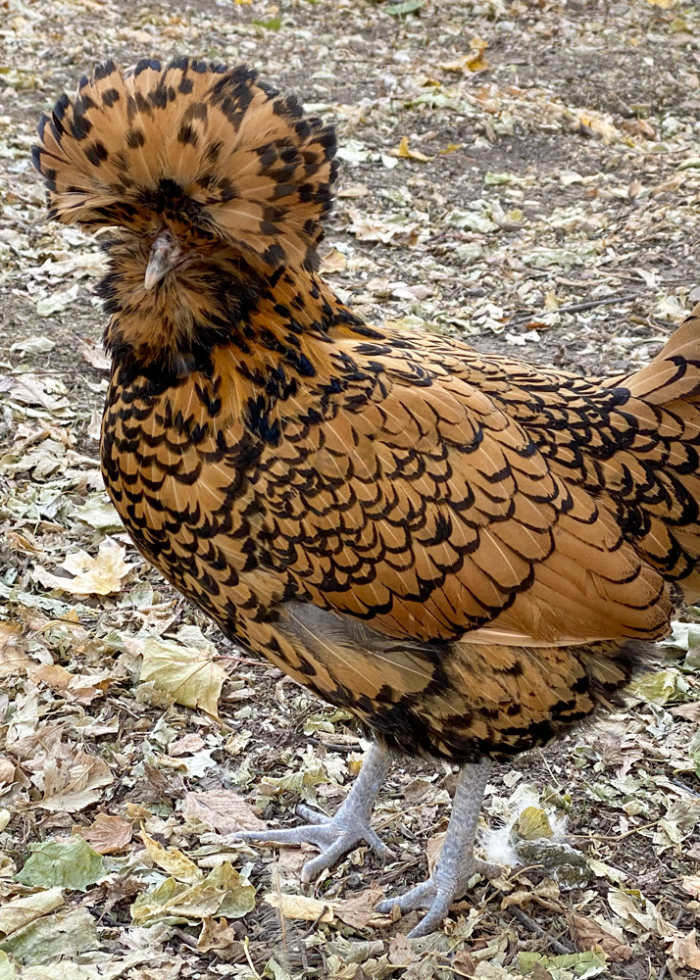 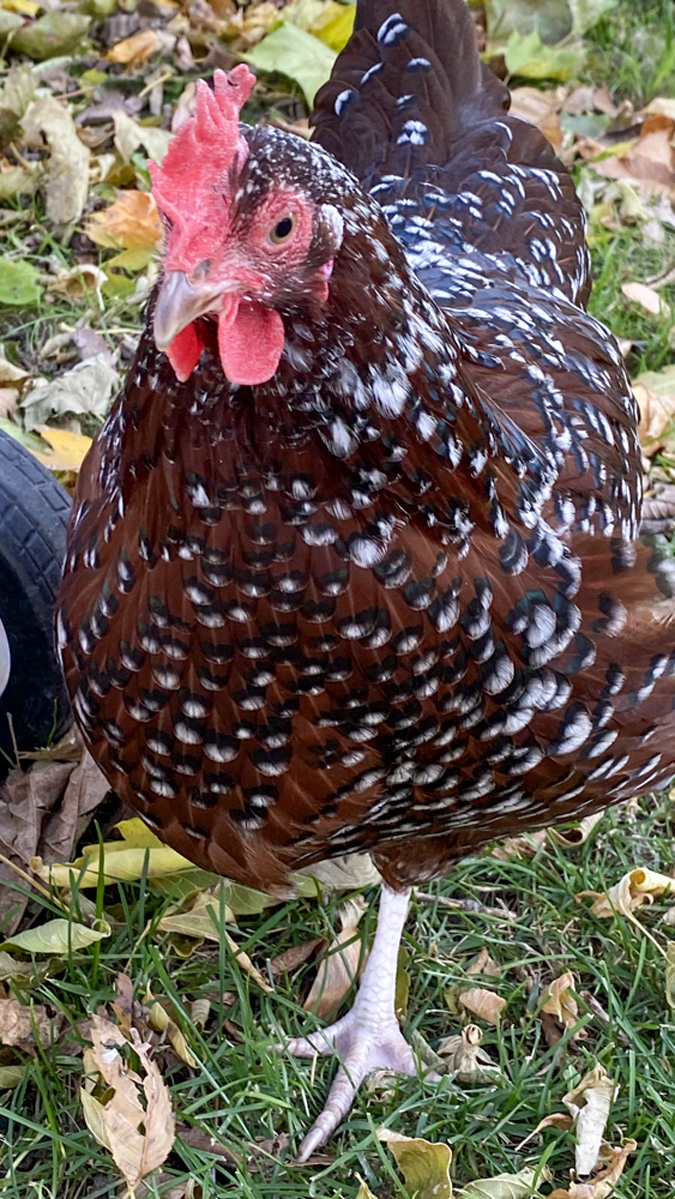 Flo & the other girls will keep an eye on things! (It is not easy taking photos of chickens!) 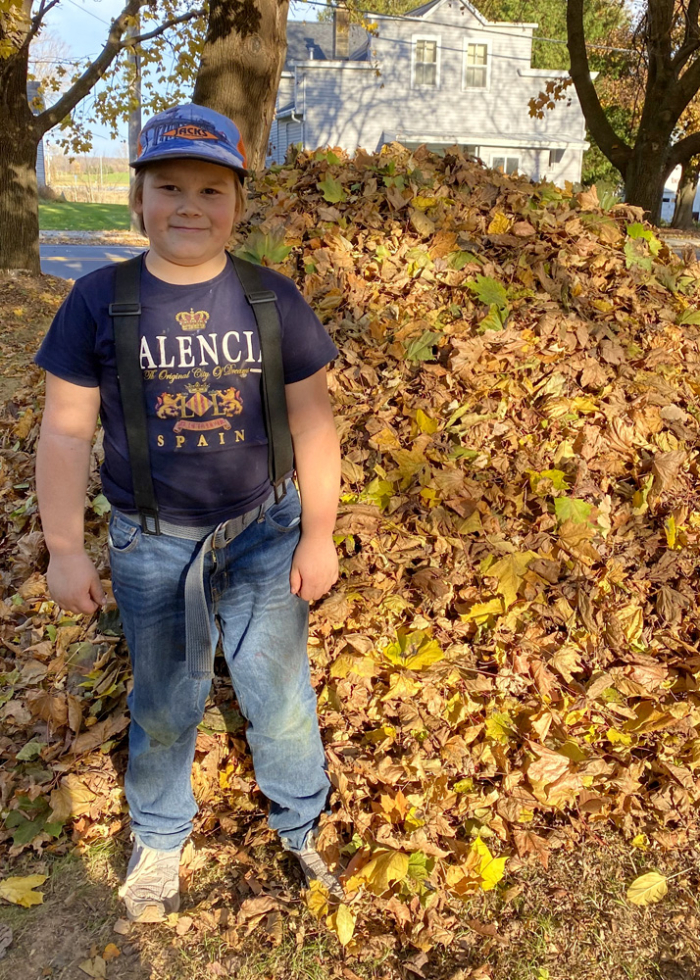 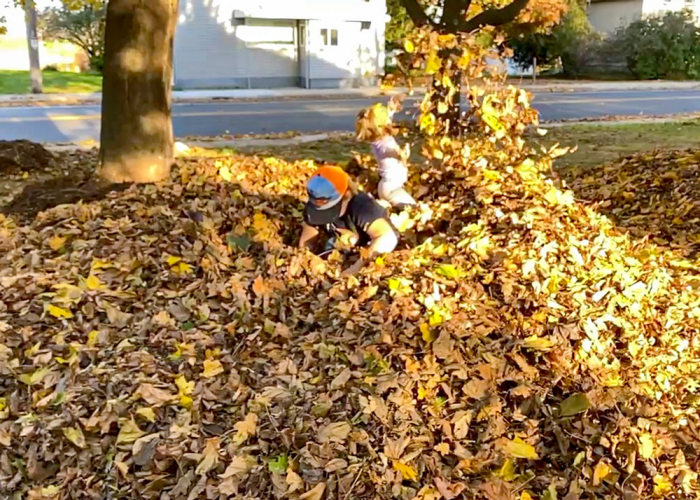 It was... LEAFY! There already was a pile when we got there, then Junah drove a little lawn tractor around the yard and collected more as Rusty raked them into a bigger pile. The kids had a blast jumping in... and disappearing! I think Ginny's in there somewhere...

We had broasted chicken & a few potatoes/fries -- those not left in the parking lot where they were spilled. LOL. You already know about that amazing cake!

And look at this: 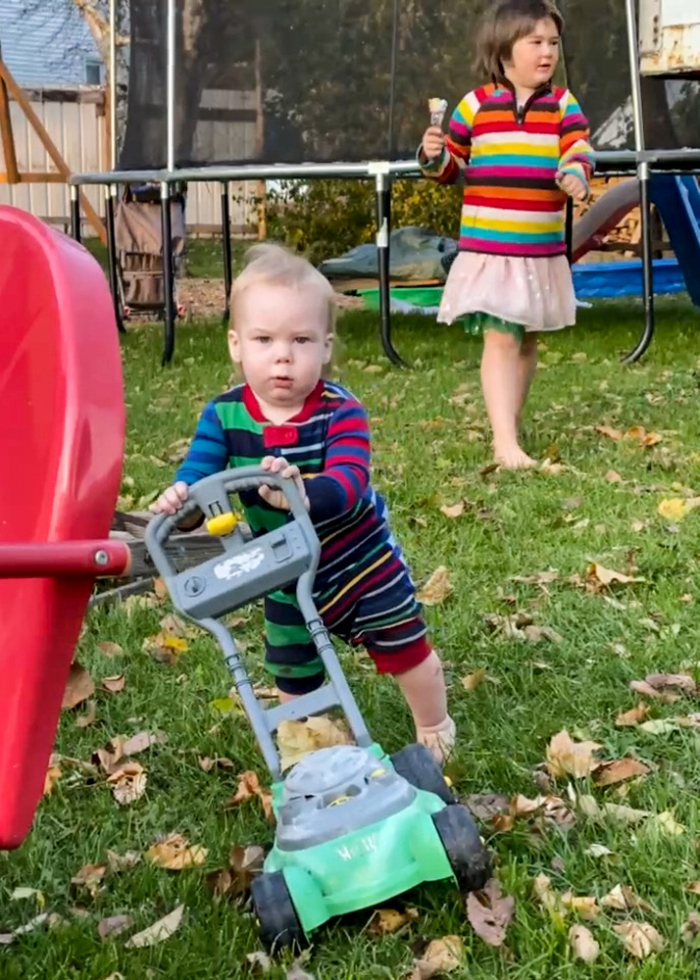 He's taking numerous unaided steps in a row! Even more with a lawnmower. Here we go!

I hope all y'all had a great weekend, too!

Hooray for that last minute bonus booking! And Junah looks so grown up next to that pile of leaves!

I'm glad Good Karma showed up so soon for you! Between that, leaf piles, chickens, mobile Davy, and that cake, it certainly was a stellar birthday weekend. Hooray for 63!

Good to karma doing her job! Love those chickens-I've never seen such colorful ones. I'm jealous of the kids getting to play in the leaves! No leaves down here in FL.Ducky looks so snug but he needs a hat!

I'm glad to hear that karma is working out for you! And look at Davy go! He looks like he's taking walking very seriously.

Look at Davy!!! And Jun - so grown up. Gin in a twirly skirt is wonderful. Such great kids and such fun pictures. YAY for Karma too. The chickens are just lovely (who knew they could be so pretty??). We had to order a new cover for our camper - the winds last year destroyed the one we had...not the new one is "back ordered" and who knows when it will arrive???

Colorful kids! They look like autumn is their time of year! I love chickens and miss their personalities even all these years later. You have great Karma with your AirBnB. You give good vibes, you get good vibes!

omg, that chicken is gorgeous!