I'll be delivering Sebastian's Christmas Stocking to his grandmother this evening. He lives in New York and she'll be going to visit in just over a week, so the timing is perfect.

Janet is a patron of Rusty's and we met at an event in October. When she learned that I was a knitter, she told me about Sebastian being the only grandson without a Christmas stocking -- her mother had knit stockings for everyone else, but had passed away before Sebastian was born, and no one else in the family was a knitter. He'd been sharing with his brother for years!

This is not my favorite type of project, though I knit two similar stockings for Mack & Addie when they were little, but she was so nice and I was sympathetic... so I agreed on the spot to make one for him. She sent me some photos and a few of her mother's notes... the original pattern was published in A Woman's Home Companion in 1945! I worked on rewriting the pattern so that it made sense to me, charting the name & date, and gathering materials. The plan was to focus on knitting the stocking while we were on our getaway to the North Shore. 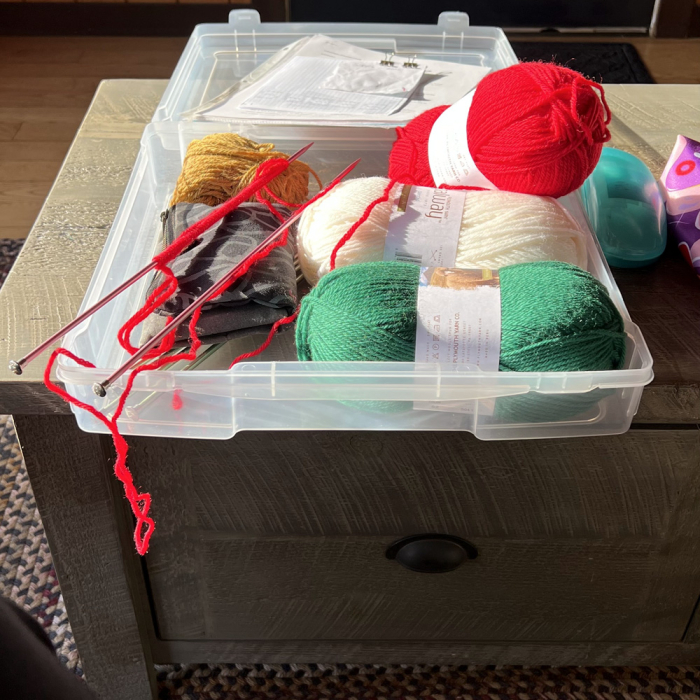 We made one stop Friday on our way north -- at Herschnerrs in Stevens Point -- because I realized that I needed a couple more colors. Everything fit very nicely into a portable project box.

I started on Saturday morning. 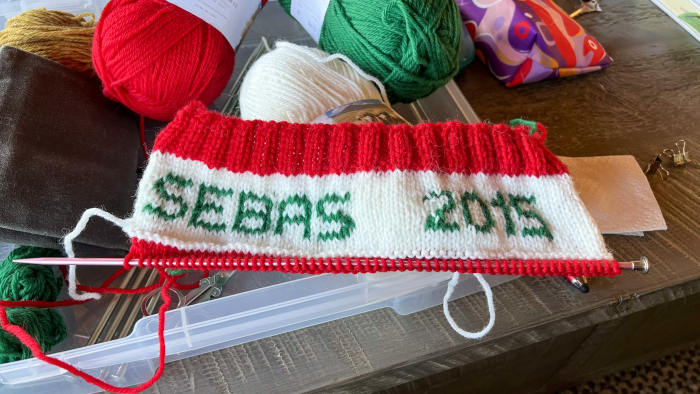 The light was amazing from the huge windows in our cabin that faced the lake, the sun reflecting on the water -- it was blinding at times! I had the personalization finished by mid-afternoon. 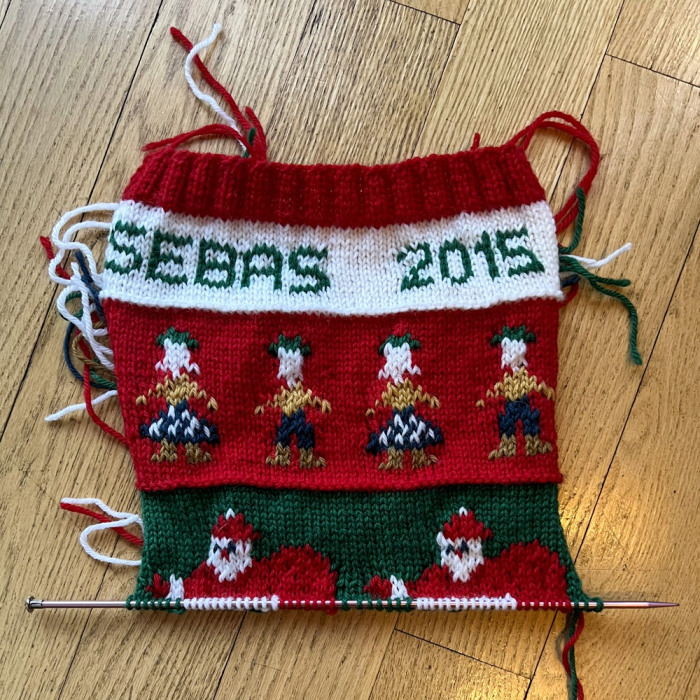 I had the girls & boys finished by noon on Sunday, and Santas were well underway by the afternoon.

Then the trees, and then the foot. It was knit flat until the foot, which was knit in the round. Ooops! I forgot DPNs, and I didn't remember when we stopped at Herschnerrs, so I checked with google... I knew there was a yarn shop in the area. 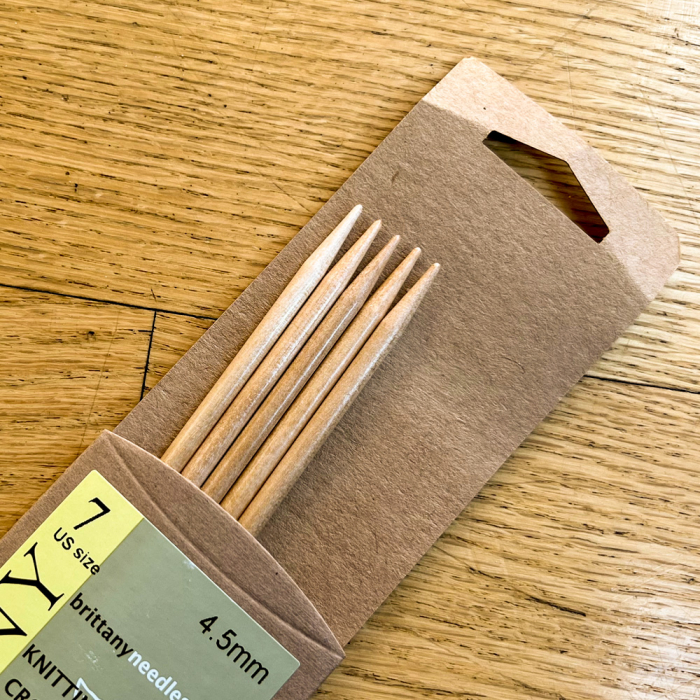 Sure enough, just a little over two miles away! Playing With Yarn -- World Class Yarn Shop, according to their website -- and I would agree, but also add MUSEUM. I did not linger too long, but I did notice some Rowan Calmer in the clearance bin and that's a rare find these days. Anyway, I know my tension is very different on DPNs than on straights, and if these needles had been a little less pricey, I'd have bought 7s and 8s, but decided on only 7s -- up one size ought to be okay for a stocking that didn't need to fit an actual foot. 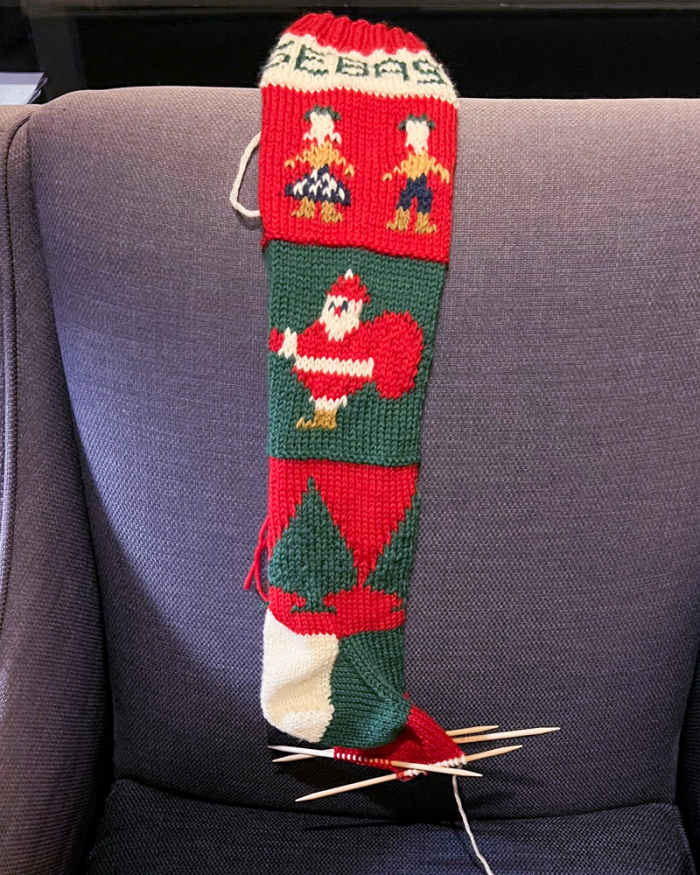 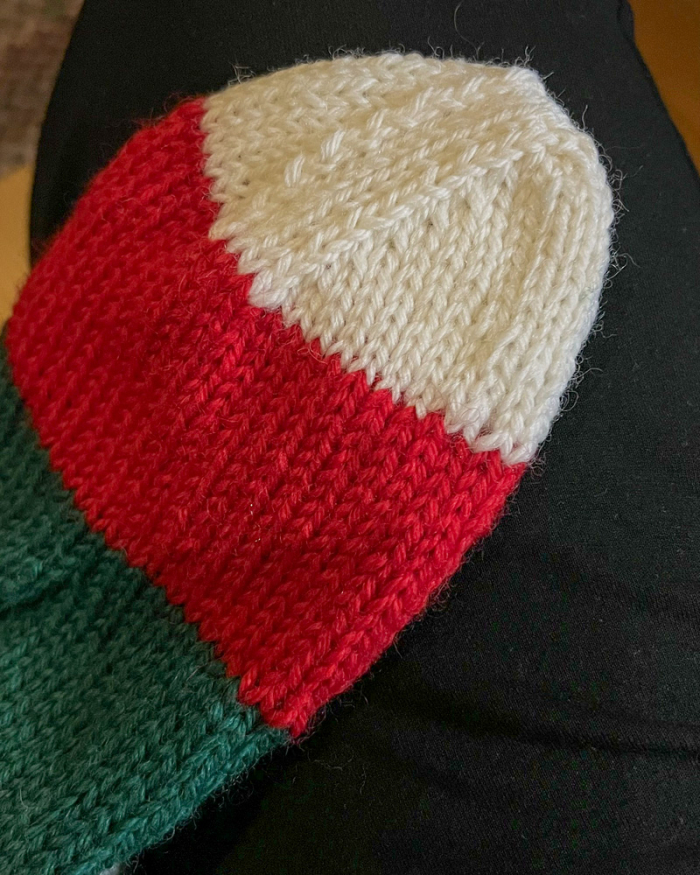 That was Monday right around lunch time, and I closed the toe before heading to bed on Monday night. We were leaving for home on Tuesday! 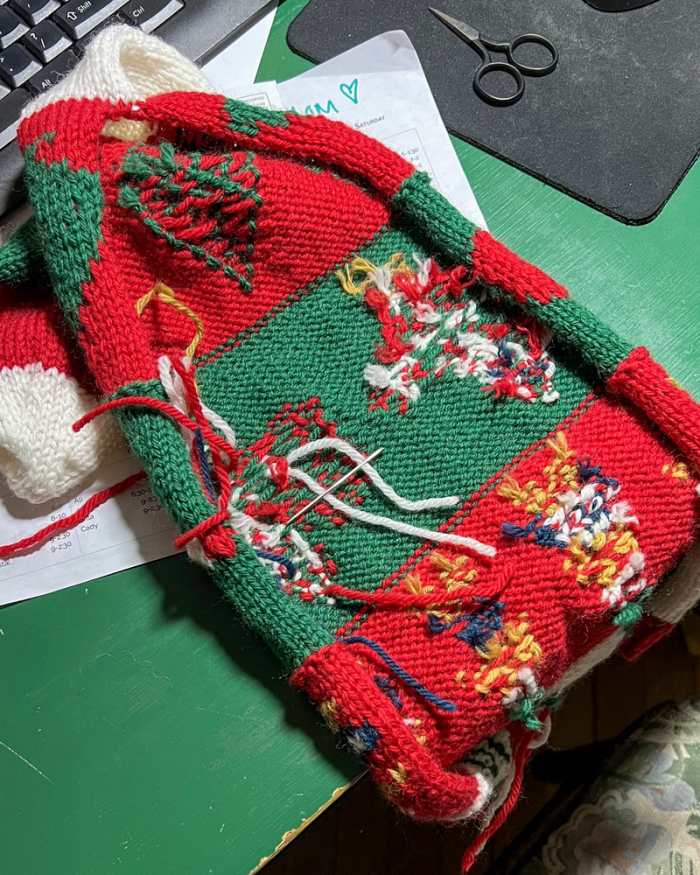 When we got home, I pulled out the crochet again for a few days while I mustered up the will to weave in ends. Not to mention Thanksgiving and two Airbnbs to prepare for guests arriving Friday & Saturday. All that out of the way, I sat down at my computer desk on Saturday afternoon to listen to Longmont Yarn Shoppe's Fiberside Chat with Sarah Schira of Imagined Landscapes (the GNOME lady... oops, one slipped in) and also to catch up a little with Stephanie Pearl-McPhee -- all of which I found informative & entertaining, and the perfect accompaniment to the weaving in & seaming. 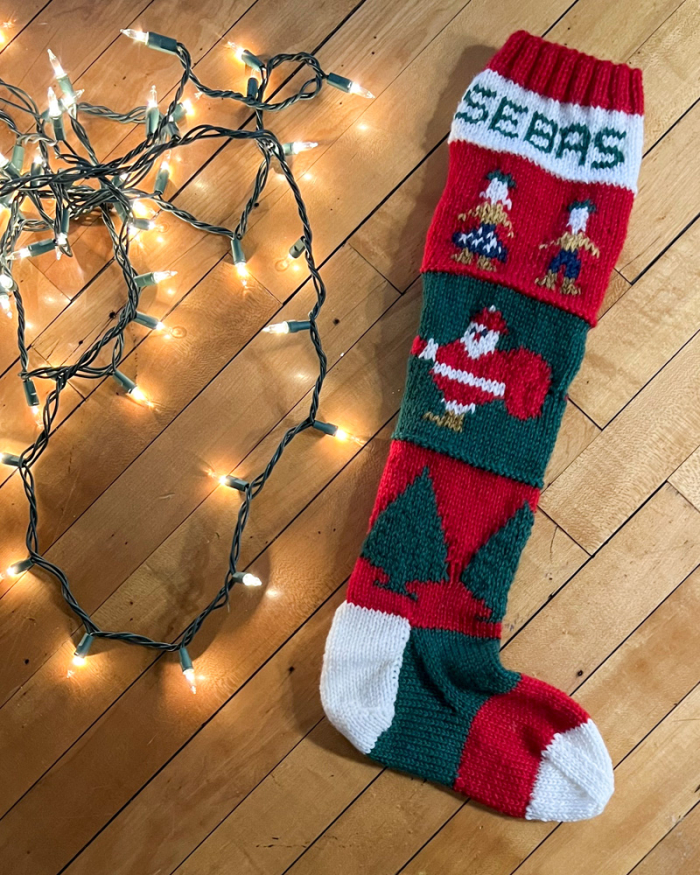 I gave it a soak on Sunday... it's pretty thick in spots, so it took a while to dry (I ended up hanging it over the shower rod instead of flat on a blocking mat). 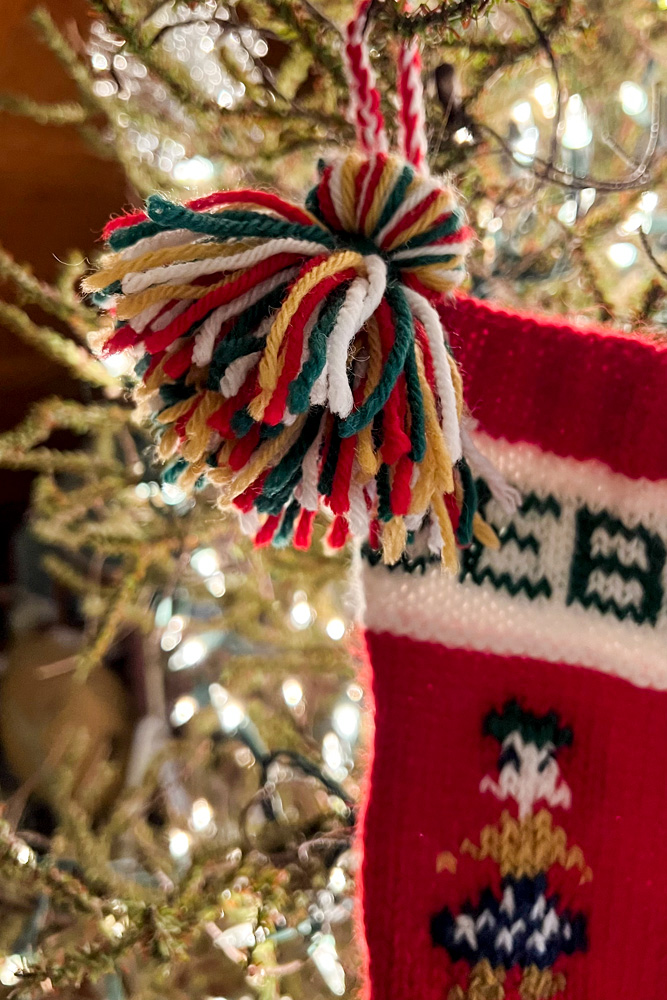 I made two very fat tassels, but ended up using only one... hung it up on my then-still-undecorated Christmas tree for a photo. Et voilà!

I'm so excited to send it on its way today. And I don't ever want to knit another stocking like this again!

It's beautiful, Vicki, and what a kind thing to do to make it for Sebastian! I've never mustered the fortitude to knit a Christmas stocking but maybe one of these days I will.

That is a wonderful stocking and I'm sure Sebastian and his family will be thrilled! I also believe that you have been granted double "compassionate knitter" points for doing such kindhearted (and speedy!) knitting.

How kind of you to make this stocking. I'm sure it will have a place of honor for years.

I so miss Herrschners twice a year mega sales. My stash has decreased considerably since moving away. That is quite a yarn shop on the North Shore. I've only been once, but may check it out again the next time up there.

The stocking is beautiful! I knit stockings for my first two great-nephews, but still need to knit one for #3. And he's now 4, so I had better get to it!

You are such a good egg to take on this project -- I'm not sure I'd agree to do something this involved even for a family member! I hope when this is given to the recipient, the whole story of who made it is passed along as well so that as Sebastian gets older, he remembers you and your gift of time and effort in making this heirloom for him.

What an incredible gift, Vicki! It turned out beautifully!

Oh, Vicki! It's wonderful! And a true gift made/given in the Christmas spirit. Lucky Sebastian! XO

What a lucky guy Sebastian is!! Your stocking for him turned out great. What a wonderful gift!!

What a beautiful stocking- lots of fun details. Sabastian will hang it and love it.Great story of the true meaning of the season.

Years ago I was commissioned to knit a stocking and I swore never again! (Too much pressure) Yours is just delightful and it’s a wonderfully gift.

You are kind and generous! Hopefully, the family will make the stocking story (and your name) part of their family lore! The stocking is fabulous!