Well, as you might imagine, it was a pretty great homecoming for Kate! There were a couple of close calls, but we even managed to keep it a surprise for the kiddos! There's some video in my IG story for a few hours yet, if you'd like to share the experience. 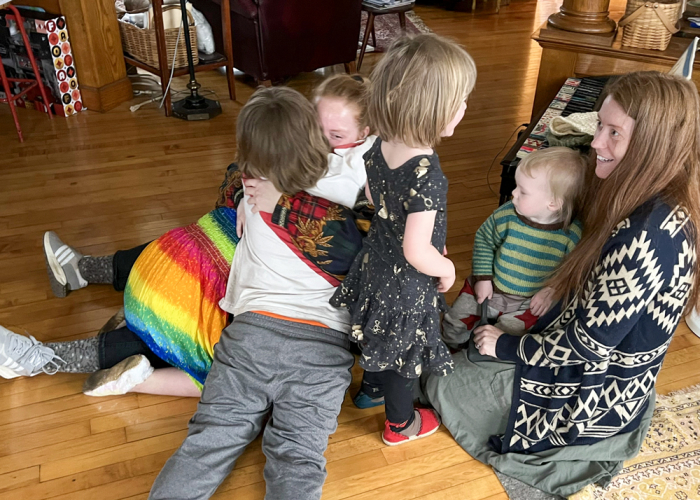 This photo sums it up!

I made lasagna (using some of my own roasted tomato sauce) and then we had cake! 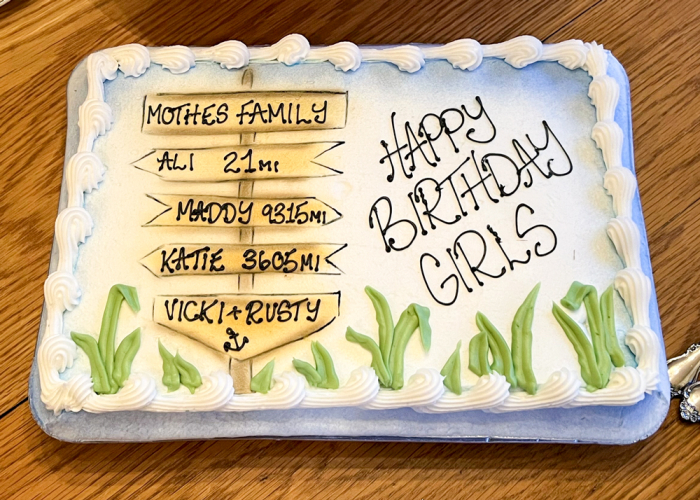 Two cakes, actually! I thought I'd surprise them with a cake -- and Ali thought the same! Hers was homemade lemon poppyseed, using some of her sourdough discard, and mine was not homemade... but it was from the best bakery and they did a great job with the decoration. We re-lit those candles at least four times so everyone could have a turn blowing them out, and somehow it all got turned on Davy once!

As much as I'd like to have these two weeks off while Kate is home, I still gotta work and there are many ways to spend my vacation/off days coming up, mainly the Family Whoop-de-doo in July and our trip to Scotland in September, so I need to budget. The next two weekends are long ones, and that'll be nice. She's also working a bit while she's here, including in Denver, which was the impetus for this trip, plus there's a sister to hang with and friends to see! It's not like we'd be spending every minute together, anyway.

I'm all set to meet up with my mom's old friend on Friday morning in Denver, and either that afternoon or Saturday I hope to be renting a bicycle and making my way to Fancy Tiger Crafts. Maybe the botanical garden and/or zoo, too, and clocking some virtual miles in the process! 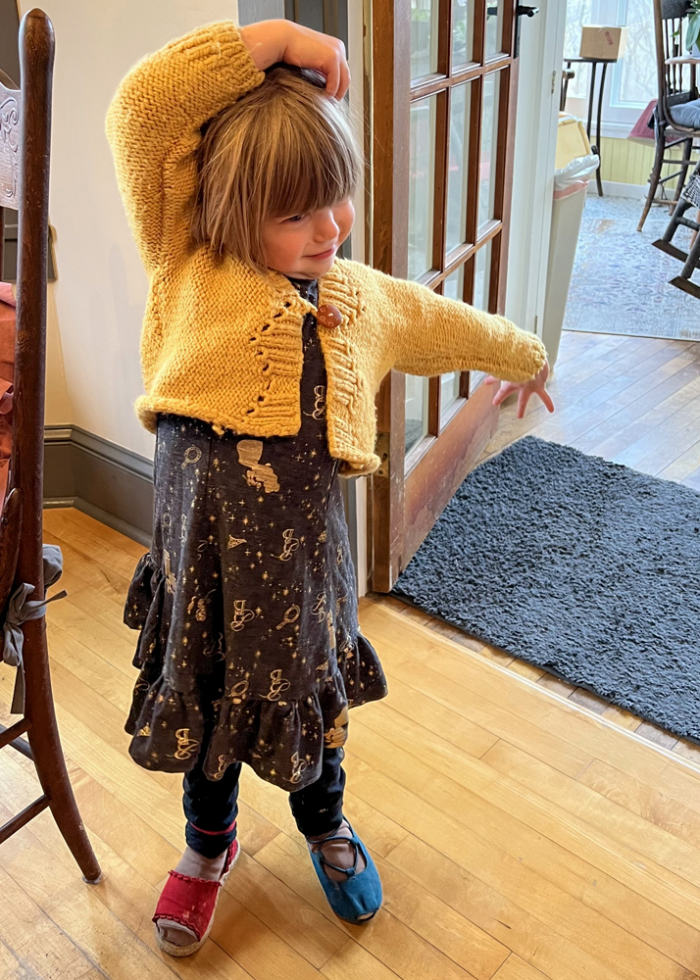 Just had to share this girl's style -- top to bottom! I said, "Strike a pose!" She's wearing the Cockleshell Cardigan that I made for Ginny... 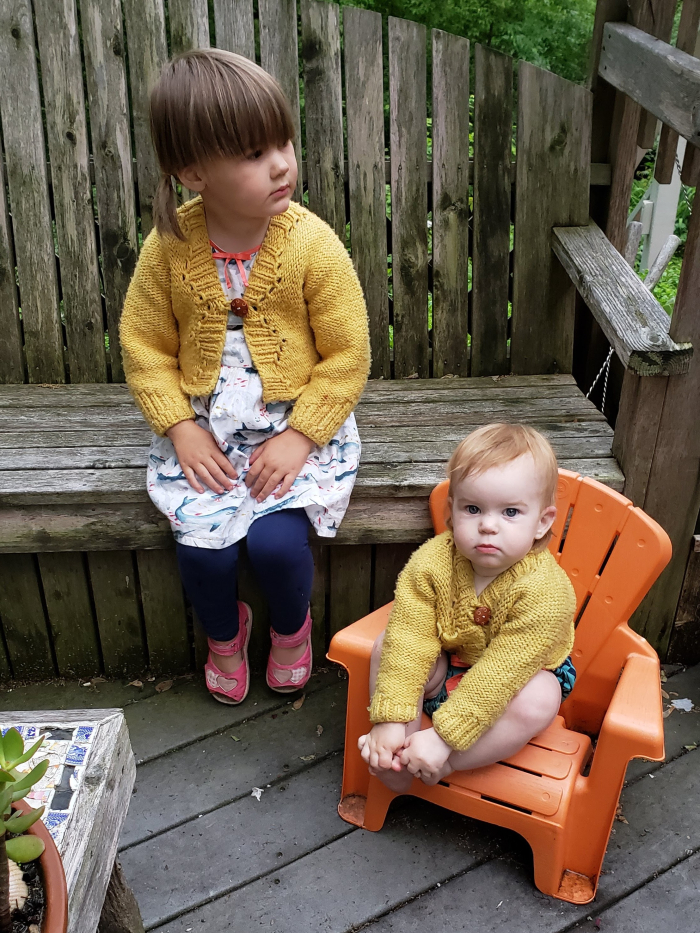 ...having outgrown the matching one that I made for her! It occured to me that it won't be long before the kids have all outgrown the knits I've made... so might need to work on something other than a blanket one of these years. heh. It sure is grand to see them over and over. I made the sweater that Davy's wearing, too! Fourth kid to wear it and still going strong.

Woke up this morning and opened the blinds, as usual when in the months when it's light enough to see something. I don't often see anything, but sometimes... 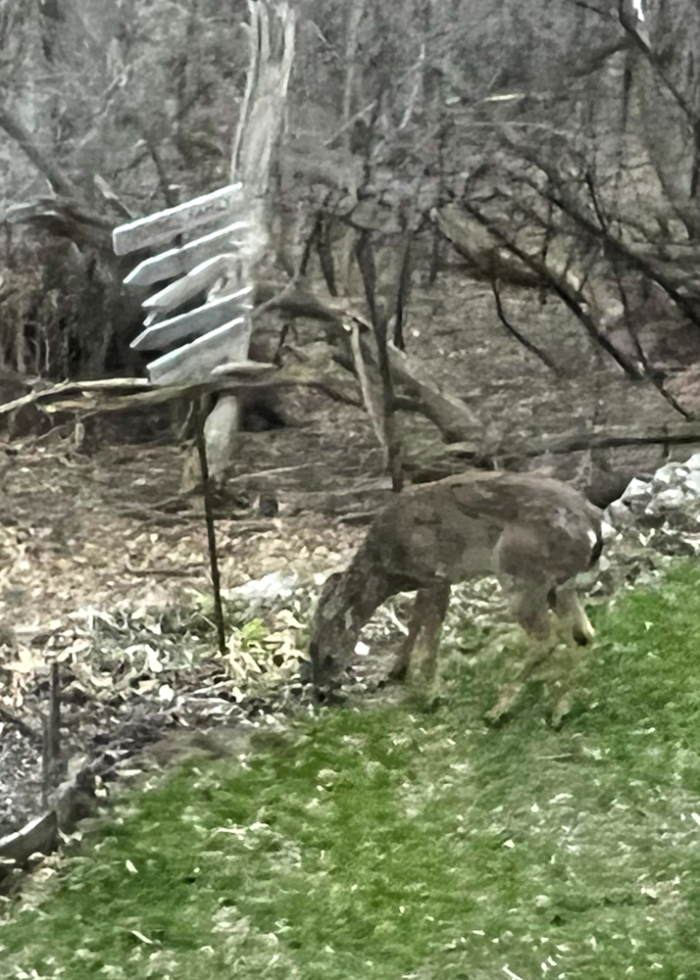 ...I do! That's a terrible zoomed-in and taken-thru-two-panes-of-dirty-glass photo, but what a nice surprise! There was another further down the ravine, too. 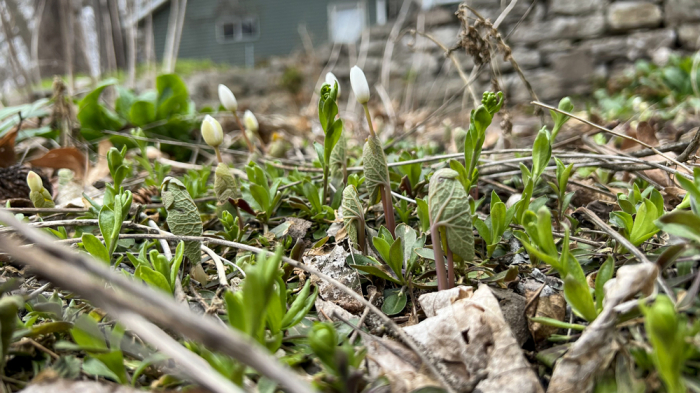 And, finally, I was relieved to see bloodroot in the garden last night. When the temp shot up over the weekend, the snowdrops all exploded, but I didn't see a single bloodroot -- not even a sign of one. My garden is usually flooded with them, so it was disconcerting not seeing any, and thankfully it was just a fluke of the weird weather.

You've captured a lot of joy in these photos, Vicki! I love both cakes and all the hand knits, too.

So much happiness and excitement! It does my heart good to look at these photos (and two yummy cakes, too). I'm glad to see all the bloodroot; my mother and I used to search for it in our woods and we knew it was spring when we had found some. Safe travels and have fun in Denver!

Those are such joyful photos!!!

What fun and what joy!! I do love that snap with Davy in it - LOL And Malina! What a little fashionista (love the different shoes). Glad that Kate made it home safely and now you are off to Denver. Have fun! The cakes (all 3 of them) look yummy!!

What a lovely precursor to the big July reunion! Have an amazing time for the next two weeks! XO

I just loved the IG story! (I got a little teary, actually. . . ) And just think how even MORE the July Family Whoop-de-Doo will be!!!!! So exciting! When you're in Denver, do not miss the botanical gardens. They're fabulous in any season. (I'm not a zoo person, so I'd always choose garden over zoo. . . ) (And as you're cycling, remember the altitude. You may feel that "mile high-ness" more than you expect. . . so be gentle with yourself.) I just love seeing your kiddos cycle through the hand knits! Actually . . . I love seeing them, period. XO

I have to tell you just how much I enjoyed that video on IG -- it made me tear up! I just loved how the kids were shocked and then overjoyed to see their aunt.

I found myself grinning from ear to ear while reading this post. I felt your family's joy, thanks for sharing. Malina has quite a unique style. All the knits look great, especially considering how much wear they get. Have fun in Denver. Looking forward to the travel log.

Oh my heart burst to see those videos of Kate with the kiddos and I had NO IDEA that was a surprise for them - how wonderful!! Enjoy all the moments and safe/fun travels!