It was a GLORIOUS weekend! The weather was just right -- 70s, sunny, breezy -- and we needed that so much, especially on a weekend. Today & tomorrow we're back in the mid-90s (with dew point close to 70 - ugh), and in the 80s otherwise as far as I can see. I took my cue from the weather and mowed lawns on Saturday morning.

Ali came over with the kids around mid-morning and they hung out while I took a shower, and then we all headed out to Target! I've never been shopping with four kids before... I can't even think of a time when I went with all three of mine at one time (at least not without protest -- Maddy hated shopping!). We survived! No meltdowns, no tears, not even very much whining... though Ginny is super stealthy, just casually adding things to the cart. 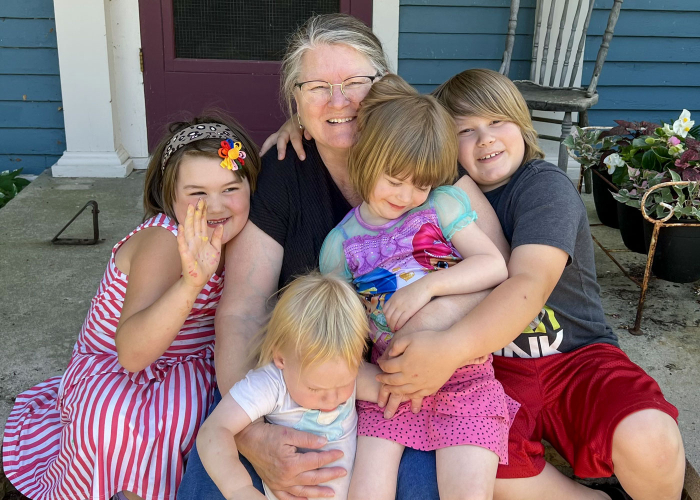 I took a good number of photos over the weekend and it's hard to choose a favorite... but this might be it, even though not everyone is showing their best photogenic self! Actually, I didn't even take that photo... Ali did!

Junah had some cash burning a hole in his pocket, and LEGO was on his mind. 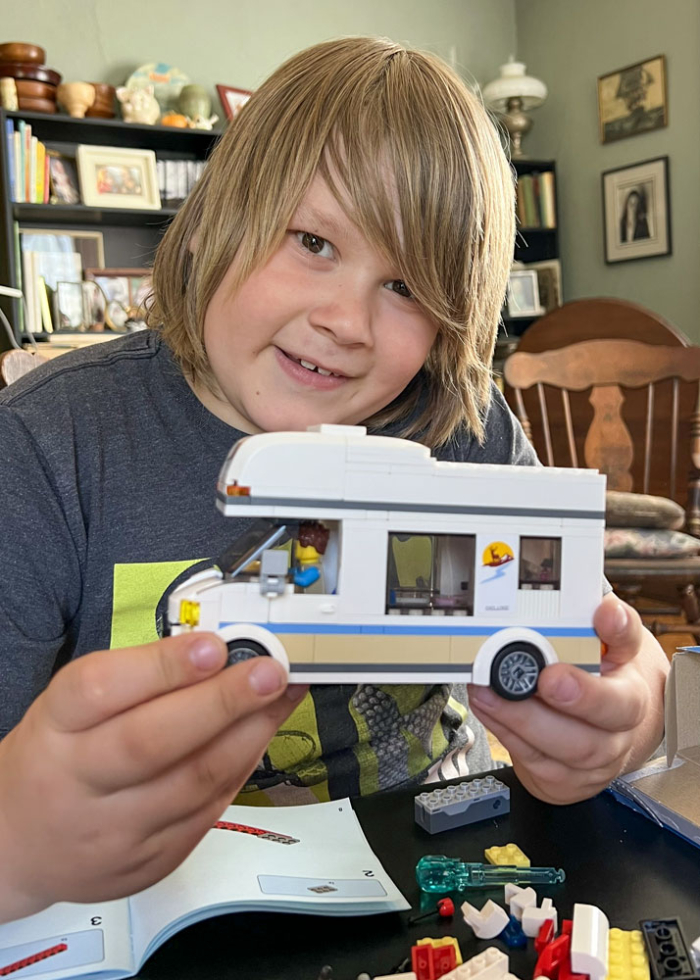 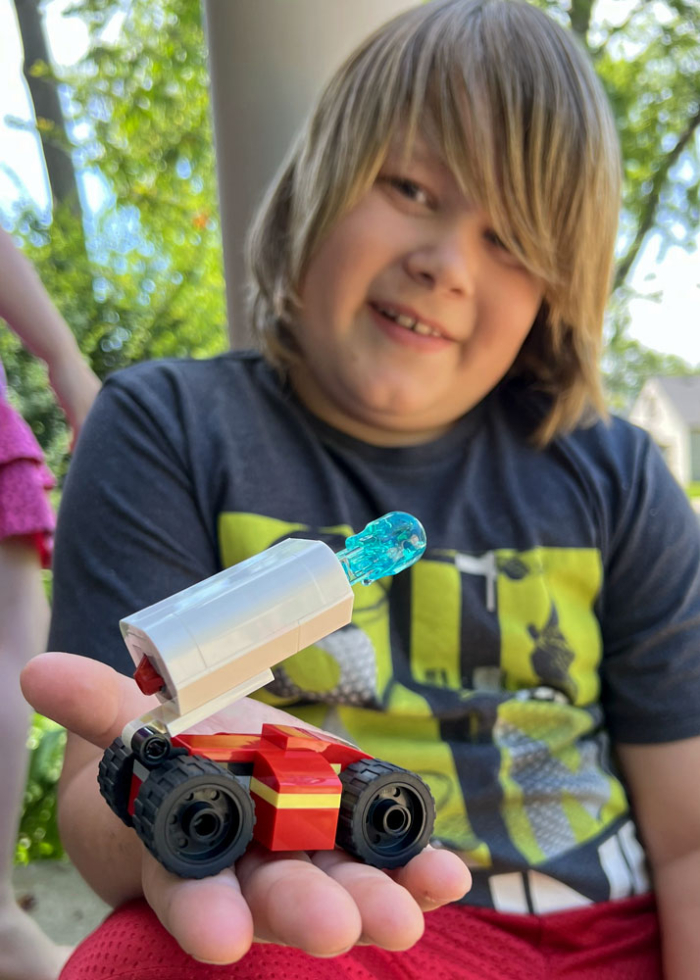 He got busy building as soon as we got back, barely breaking to eat a hot dog for lunch. 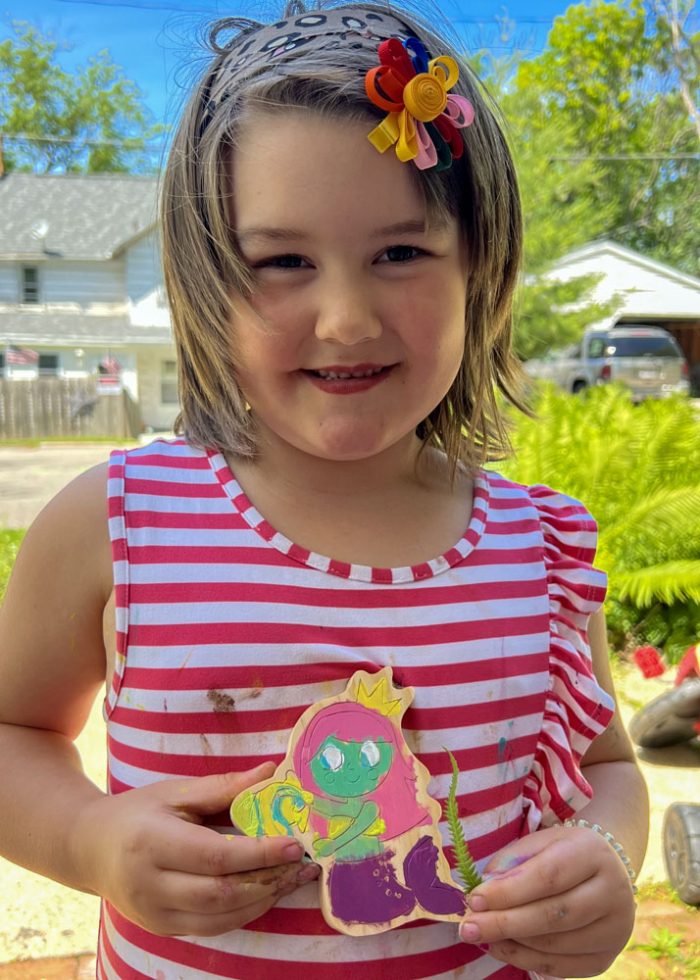 I bought some craft stuff and the girls were busy with that. Ginny was delighted to learn how to mix red & blue paint to make purple, not to mention yellow & blue to make green! 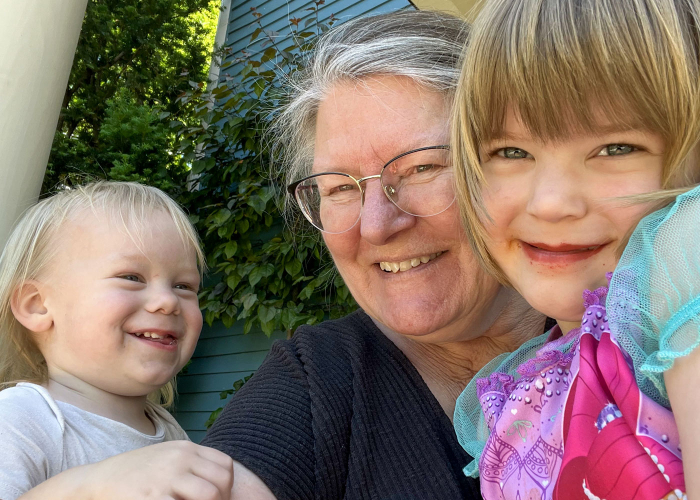 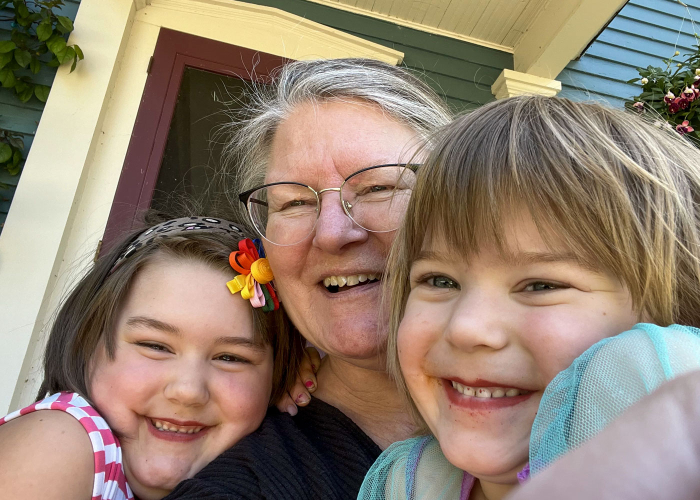 (Malina had just eaten an ice cream sandwich!) There's a fun series of selfies with Davy on IG, and a few other photos/selfies of/with the kids. 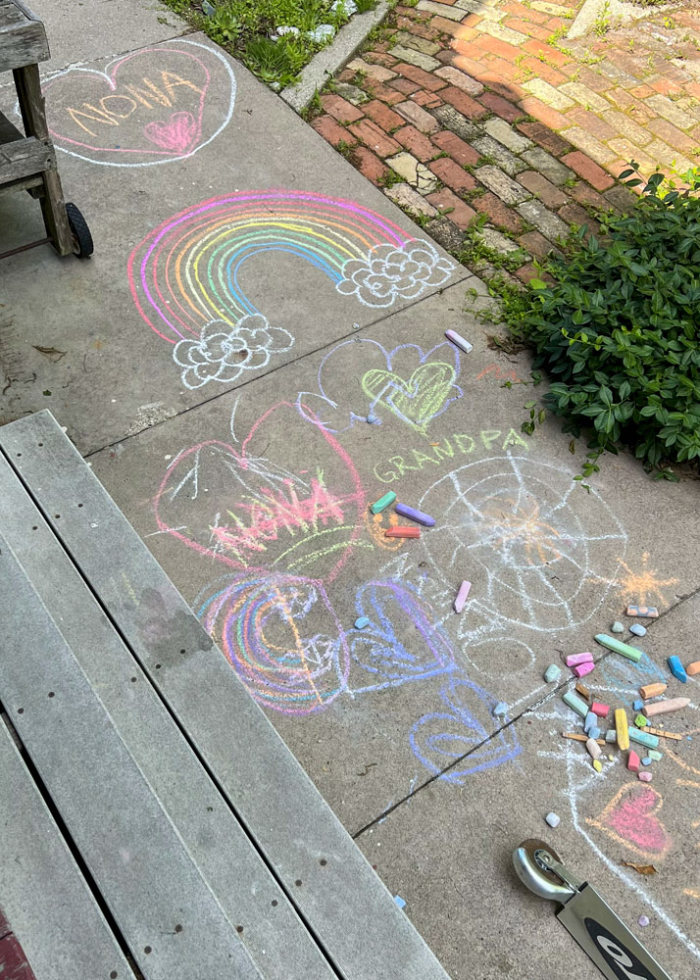 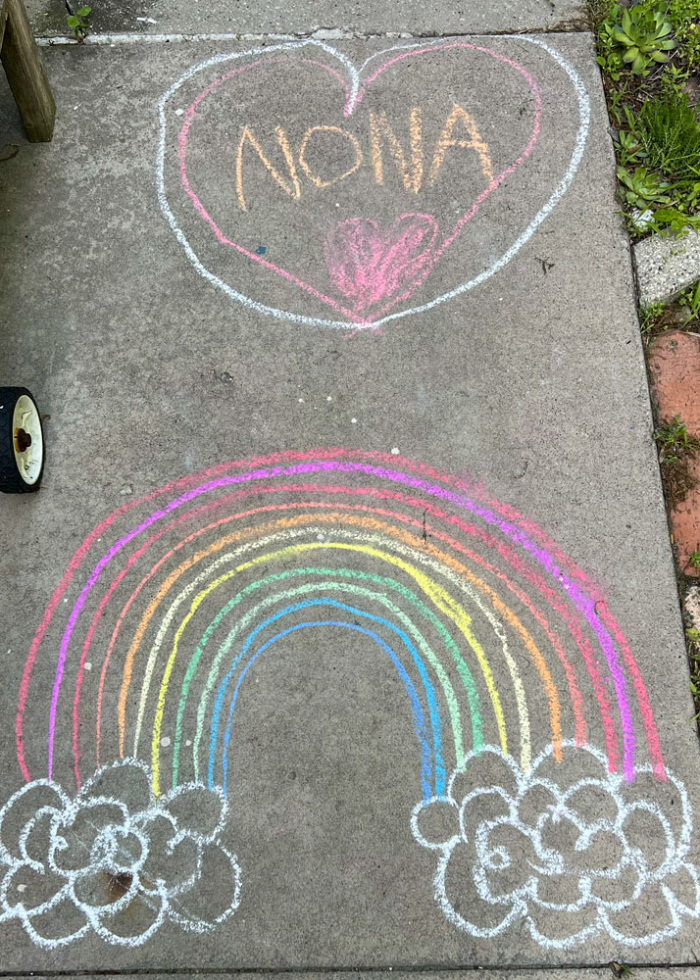 Sidewalk chalk & bubbles came out, we traipsed through the back yard & garden... it was a lovely day!! And I even had time for a nap. 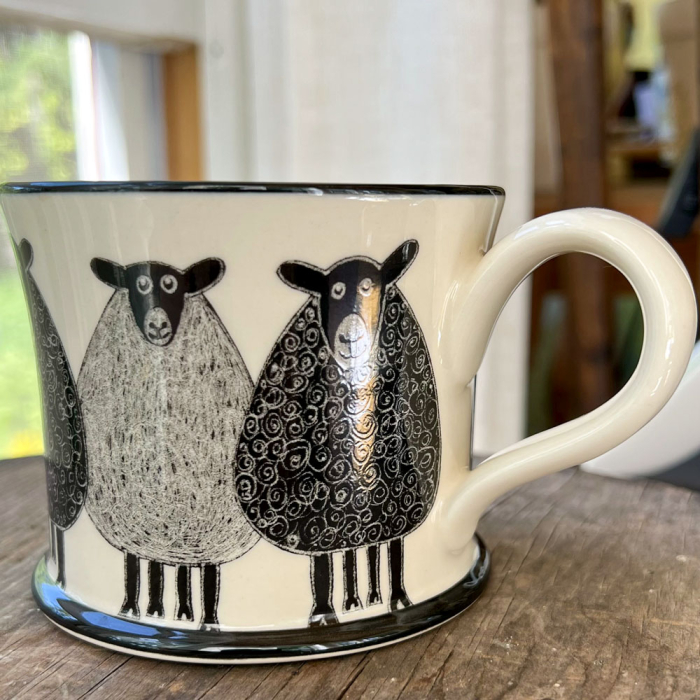 Sunday began with coffee in the Garden Room. 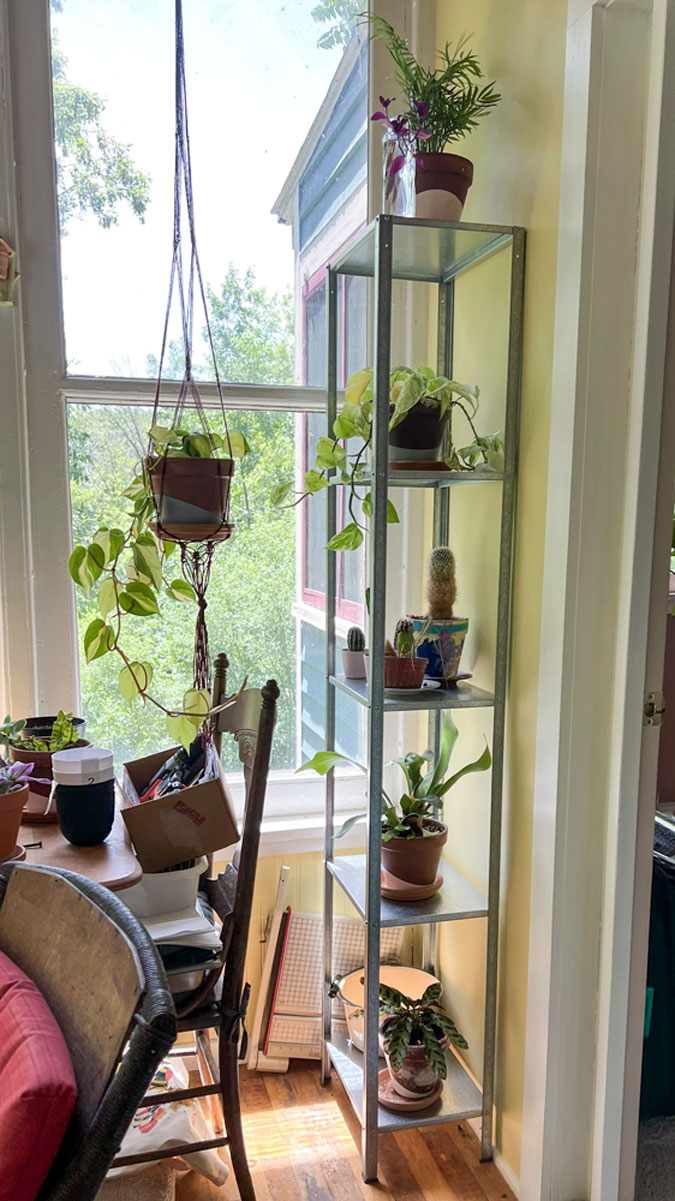 Then I put together an IKEA shelf that I've had hanging around for too long, and did a very little bit of rearranging in the Garden Room to fit it in.

I puttered, did some cleaning -- and cleaning out -- and then met my current Airbnb guests at the pergola for a beverage and a nice chat. She was a brand new elementary teacher about the time we moved to Appleton, and it turns out she was one of Michael's! I told him that I hoped she was a nice teacher, and he said he'd remember if she wasn't!

Maddy & Viv start their journey today! It's very early Tuesday morning in Australia right now, and about 12 hours from the first leg. Unfortunately, the friends they were going to visit in Seattle for a few days have Covid, so there had to be some last-minute rearranging of plans. They'll end up staying a night at a hotel in Seattle before catching a flight to Chicago, then making their way to Milwaukee to visit with other friends for a couple of days. I'll be driving down there to pick them up on Saturday or Sunday -- whatever they decide. Bonus is a day or two extra here! I reminded her that the #1 requirement for travel right now is PATIENCE -- stay calm & cool & roll with it -- but I hope she doesn't have to tap that well. At least they don't have to worry about tests -- NZ just dropped their requirement yesterday. I also reminded her that we survived Aer Lingus/Detroit... thus, can handle anything! It's a packed itinerary: Orange > Sydney > Auckland > Los Angeles > Seattle > Chicago > Milwaukee > HOME! That's over 6-7 days, total, and not all of it by air, but still a lot. If you can send some GOOD TRAVEL JUJU their way, it would be appreciated! I shall be monitoring it all from here. haha. 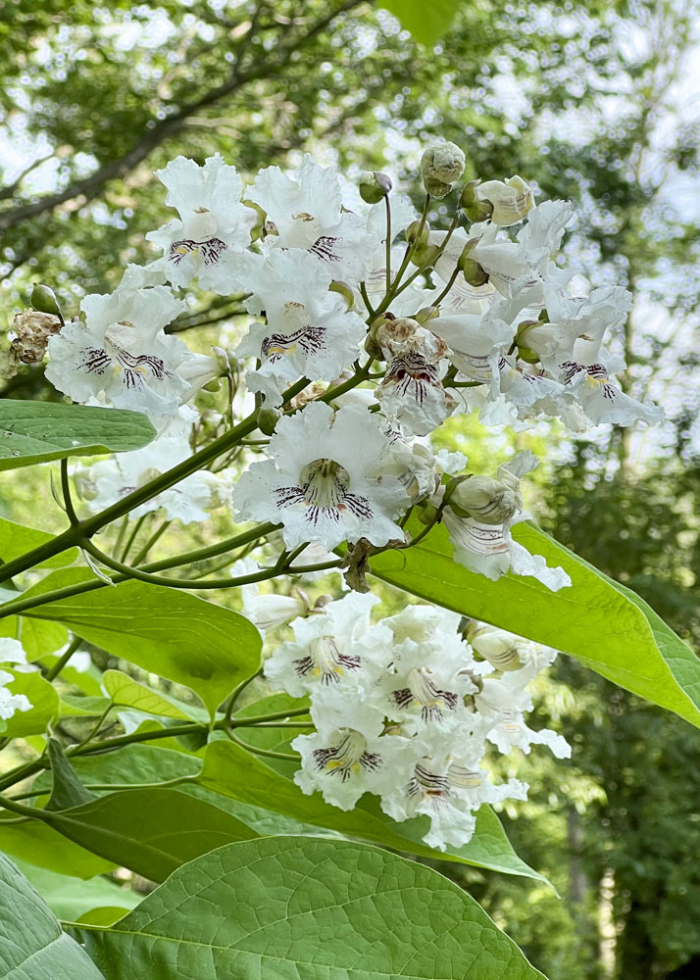 Finally, my catalpa tree exploded in blooms over the weekend!

My grandma had a huge catalpa tree in her front yarn when I was growing up. I remember taking the fresh flowers that fell and touching the end where they were attached to my tongue. You can lightly taste the nectar, it’s just the tiniest hint of sweetness.

Your Random & Weekending & Occasional Unraveling stuff is always wonderful to hear about! Your grands are all great and those sidewalk rainbows are terrific, too. I'm so excited that Maddie & Viv are starting their journey and will soon be here! I will be sending them all my best travel juju over this week for safe and easy travels.

So many wonderful things in this one post! I think I, too, would need a nap after shopping with four kids (frankly, I'd need a nap after having four kids just around me for a while!). I will keep fingers mentally crossed that Maddy and Viv have a smooth journey to get to you.

I just love your posts, Vicki . . . whatever they cover! Thanks for all the smiling faces. Your grandkiddos are just beams of light!!! And I cannot imagine a Target Adventure with FOUR kids at the same time. No wonder you needed a nap. . . Love your garden room. If it were mine, I don't think I'd ever leave it. And all the best to Maddie and Viv with their travels. (Erin and Keith's flight home last Sunday was canceled THREE times. They finally got back home, but it was a TRIAL. . . ) Enjoy these HOT days as best you can. (My weather is just like yours.) XO

I am sending all the good travel juju your way... for all the travelers making their way to you!

I smiled while reading your post. The great smiles, The fun activities!. Your sun room is so peaceful, I sighed deeply imaging myself sitting there with you enjoying a book. Travel juju is in place for the trip.
Your tree is gorgeous-does it have a sweet scent?
I love IKEA furniture- Enjoy your new shelving.

That photo of you with all 4 grandkids fills me with joy - talk about having your arms full of love!! And I'm sending all the good travel juju possible.