I had a long weekend because of a schedule change at work. And today I'm staring at the calendar in disbelief... are we really only a week + a day away from the end of August?? 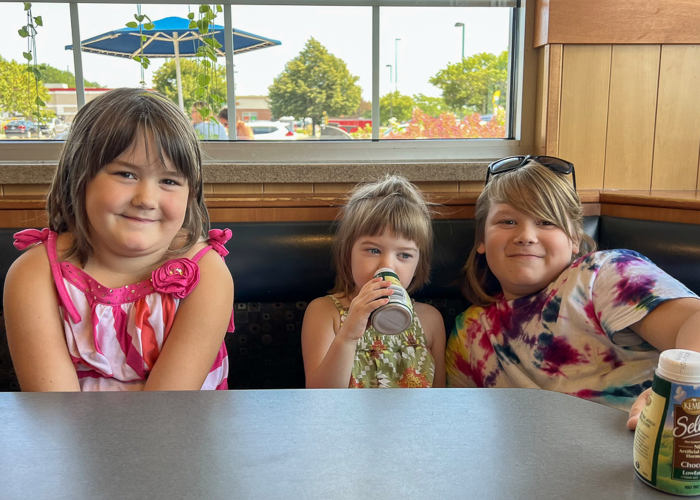 I had three big kids over on Sunday night for the last (ugh) sleepover of the summer! 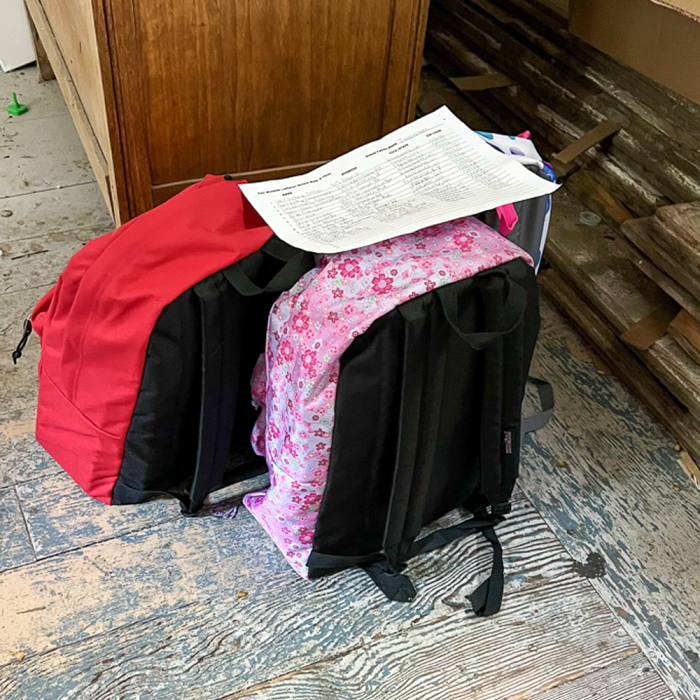 I delivered them home in time for orientation & pics at school. Ali had packed their backpacks on Sunday night, and they took all their stuff to school yesterday. We plan to head out there with pizzas next Monday, after their official First Day, and so that they can bid farewell to Maddy... I take her to ORD a week from tomorrow (ughhhhh!).

In other weekend news... 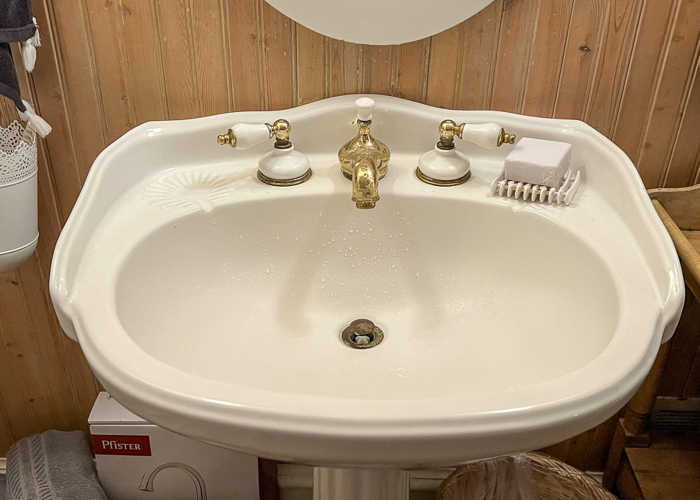 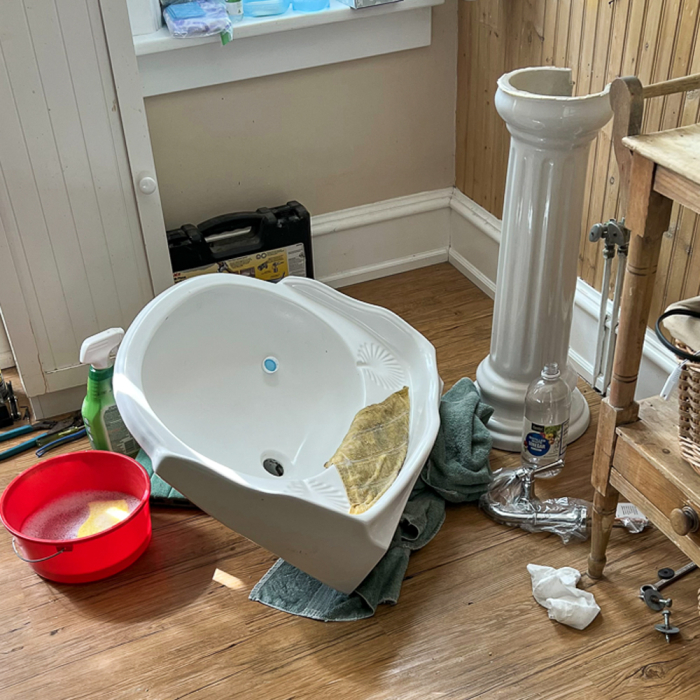 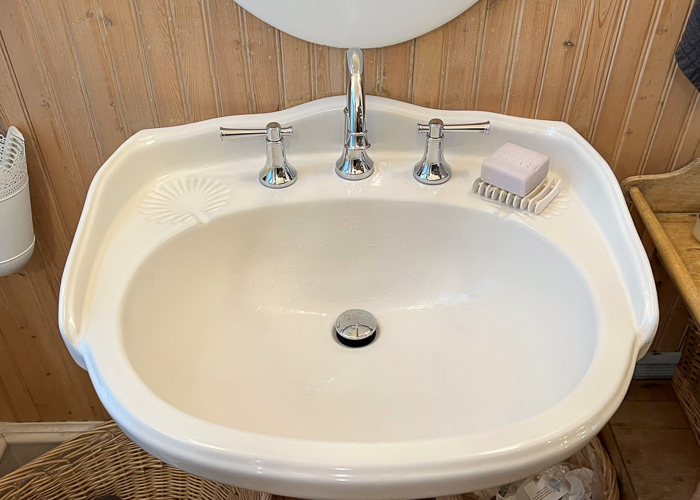 That job took ALL DAY! We figure it's been 30+/- years since our major bathroom overhaul (there have been a few minor overhauls since then), and that brass faucet has looked awful for 25 of those years... I'll spare you the close-up. It started dripping a week or so ago and was deemed "unfixable," so I got to go shopping for a replacement!

Rusty ended up doing a lot of sawing to remove all the old stuff, but the sink came through unscathed, and there was only one incidental trip to the hardware store! 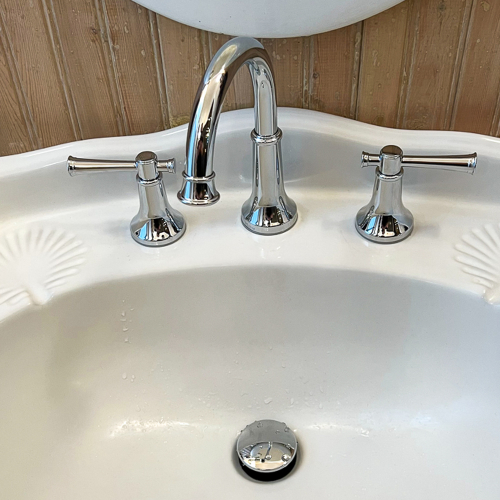 One of my favorite features is that the faucet swivels! It's also taller and that makes it easier to fill my Waterpik*. The faucet handles also sit a little higher (and they're not so pudgy), so it's easier to turn on the cold water without knocking the soap into the sink.

I was so excited that I didn't even wipe out the sink before taking photos and had to do a little "cleaning" with Photoshop!

Next up: I was also authorized (by the guy who'd rather do almost anything other than plumbing) to buy a new kitchen faucet! That'll be a project for another day -- not today, but soon. Very soon.

*A couple of dentist appointments ago, my hygienist suggested a Waterpik after I complained (once again) about how difficult it is to floss: crooked/jammed together teeth, a small mouth. I go to the dentist more frequently than most because of periodontal maintenance... I have deep pockets (not the kind I'd really like, unfortunately) and I know that flossing would be very beneficial. Anyway, I bought a Waterpik that day... and used it a few times. When I 'fessed up at my next appointment, she said that adding just a little bit of mouthwash might jazz it up a little, but my dentist said something that really stuck with me; he said to 'use it until you can't live without it.' I vowed then to use it every day until the next appointment. I offered myself a little reward of new sandals if I kept it up... which I purchased in advance so I could wear them in Denver! Then I really had to make good on my "vow," and I DID! #1, I definitely got to the point where I couldn't live without it -- I even took it to Denver! My teeth never felt so polished for so long between actual polishing. #2, At my appointment last month, my "pockets" improved -- every single one -- by at least 1mm, and some even more. So I continue to use it every day and plan to take it to Scotland, too!

I can't believe it's school time. I can't believe how BIG those kiddos are getting. I can't believe Maddy is leaving in a week or so. But, on a positive note, the new hardware in the bathroom is so nice. I won't let my husband do any plumbing...I think it ends up being costlier in the long run - LOL.

It's amazing how big a difference just changing out a faucet can make! I'm glad that lovely sink was saved -- hard to find a big sink that looks nice these days. I'm denial about it being the last week of August and the fact that at this time next week, I'll have a seventh grader. I'm really milking these last days of summer!

Several ughs, like the last sleepover and taking Maddie to the airport, but loads of good things, too. The faucet and handles look great and I'm taking your Waterpik info. to heart. I've got crooked/crowded teeth and deep pockets, so I'm off to shop Amazon for a Waterpik. Thanks and I hope the school-going crowd has a wonderful first day!

Well done, Rusty! (and your photo documentation was excellent as well!!)

I too am off to look for a Waterpik! Thank you!

My dental hygienist recommends using a few squirts of peroxide in the hygienist rather than mouth wash. It must be popular because Amazon sells it by and 6 pack. I also use it everyday and now can't go without it. Your new sink fixtures look great!

What happened to my sentence? It should say using a few squirts of peroxide in the waterpik!

I had the same dental experience but with the Sonic toothbrush. Six months of use and what a difference it has made. My dentist and hygienist were both astounded. No more bleeding gums and hardly any plaque. Also my teeth have never felt so clean and looked so white long after the dental office cleaning.

Good for you with the Waterpik! It's so nice to get results that help you stick with your new habit for the long term. Tom and I committed to "flossing together" every night about 15 years ago (we are SO exciting . . . ) and it made a HUGE difference. Then, we purchased electric toothbrushes (he has an Oral B and I have a SonicCare), and WOW. That made an even bigger difference. Imagine what a Waterpik might do for us . . .

Enjoy these last bits of summer, Vicki. Although I'm sure the weather will remain somewhat "summer-y" for a while yet, the fading light and the cool nights and . . . SCHOOL . . . will change everything so quickly. I'm sending good school juju to your kiddos! It's all so exciting. XO

Those kiddos look so grown up! and is Malina really in school already? Love that pic of their packed backpacks. ... and your sink looks fantastic (also love the waterpik testimonial)!