When the kids were over a few weeks ago, Malina was drawing/writing on the big chalkboard. She was showing me and saying, "D - O - and the letter RAINBOW!" 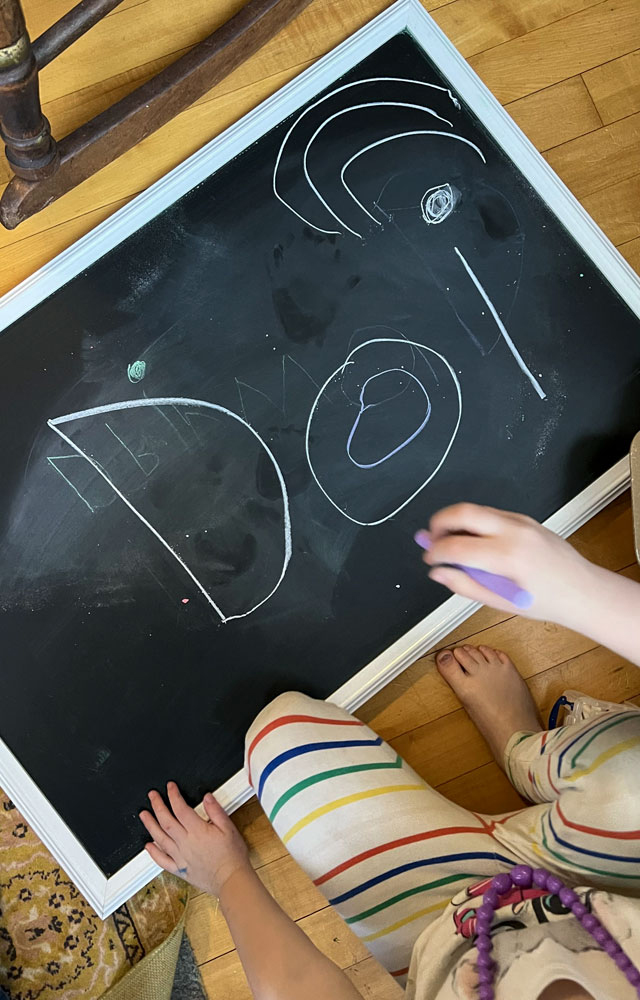 It's my new favorite letter! I smile every time I think of it.

In related (colorful) news... There's a big new project in the works! For Modern Daily Knitting's new I Made It with Atlas series (previously here and here, so far), I'm knitting a sweater for the kids... NOT a sweater for each kid, as some might be thinking (at least that's not the plan right now), but one that'll fit Junah right now (with a little room to grow) and that all the rest will eventually grow into. There's nothing quite like seeing all the knits I've made for one cycle through all the others -- sweaters that I made for Mack (graduating-high-school-this-spring Mack!) that Davy's wearing now!

The pattern I've chosen to make is Holli Yeoh's 5 Point Bomber (Ravelry). I considered a few others, but kept coming back to the Bomber because of what other makers had to say about it (all links to Ravelry project pages):

As of today, there are only 17 Bomber projects on Ravelry, and 14 in the Project Gallery -- to read such positive comments on nearly half of those made it a pretty easy decision! I have made one of Holli's patterns before, the very colorful JUNEBEAN from her Devan pattern, which I love.

I bought the 5 Point Bomber pattern three months ago today and have been mulling over ideas ever since. I knew I wanted more color, and probably more stripes, but exactly how... that's eluded me. I finally emailed Holli and told her of my grand plan, asking if she might have some sketches that I could use to help solidify my ideas. She sent me PDFs of her original design sketches in a few different sizes -- and suggested that the kids color some, too!

We did that on Sunday when they were over for my birthday (64!) and, well, it's a RAINBOW world!! 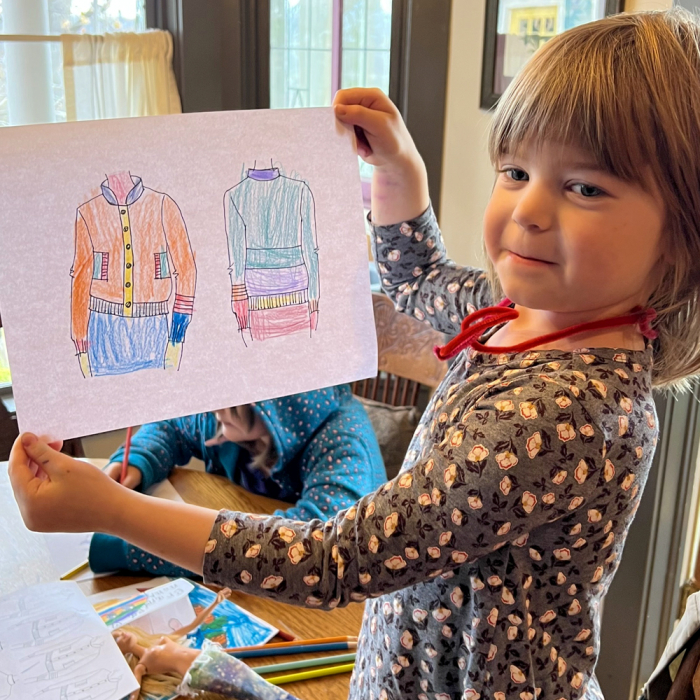 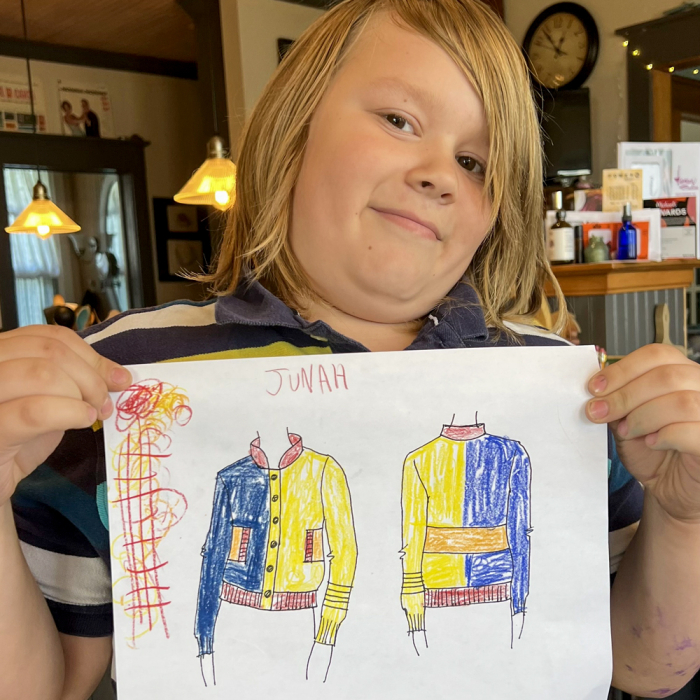 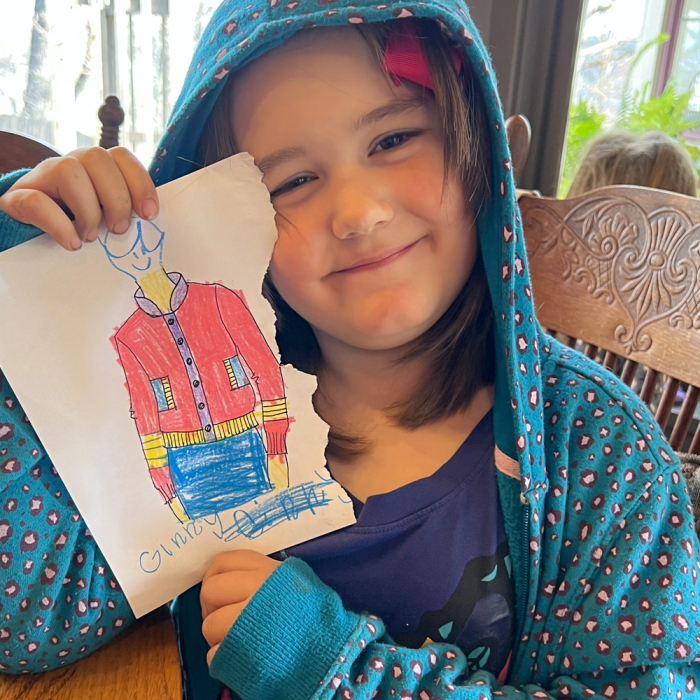 They had a blast! And they're SO FUN!! 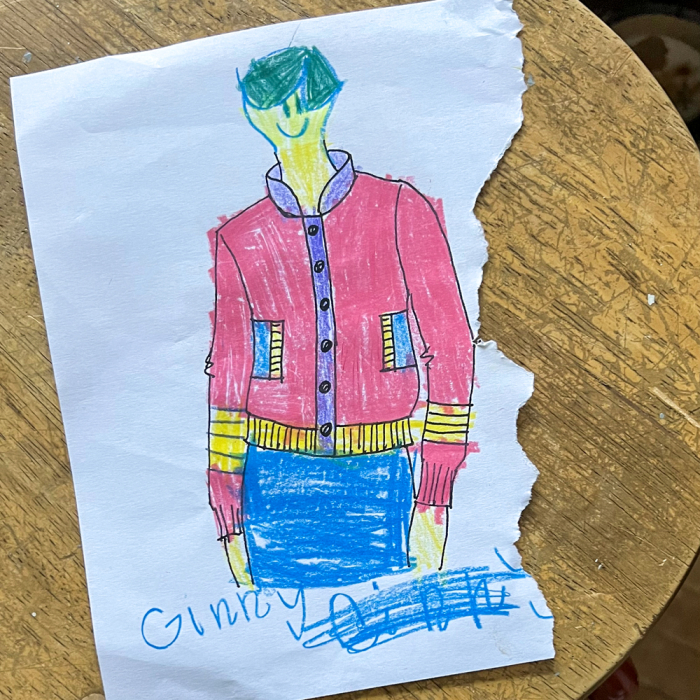 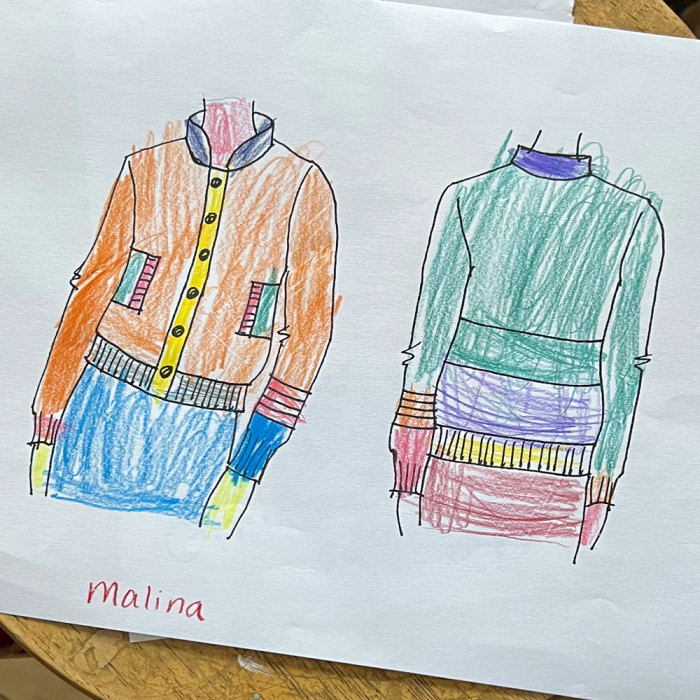 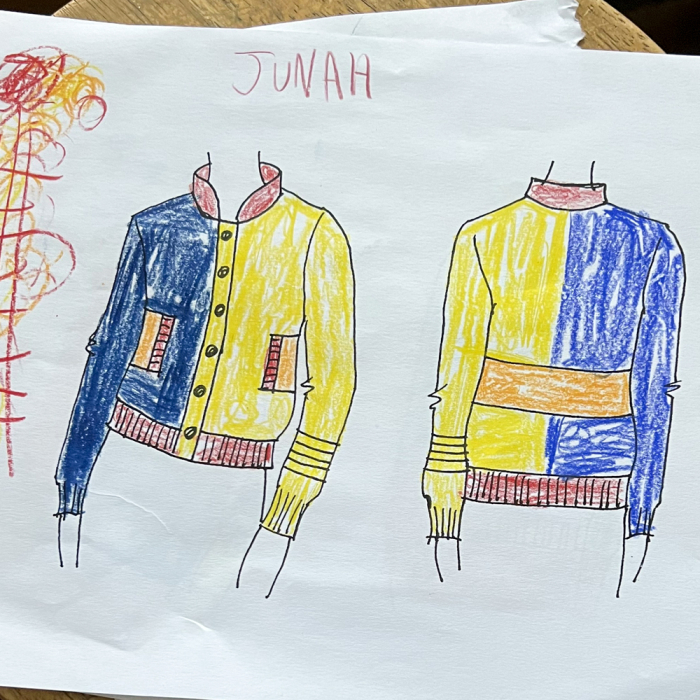 Ali has always loved fashion and color, so she did some, too! 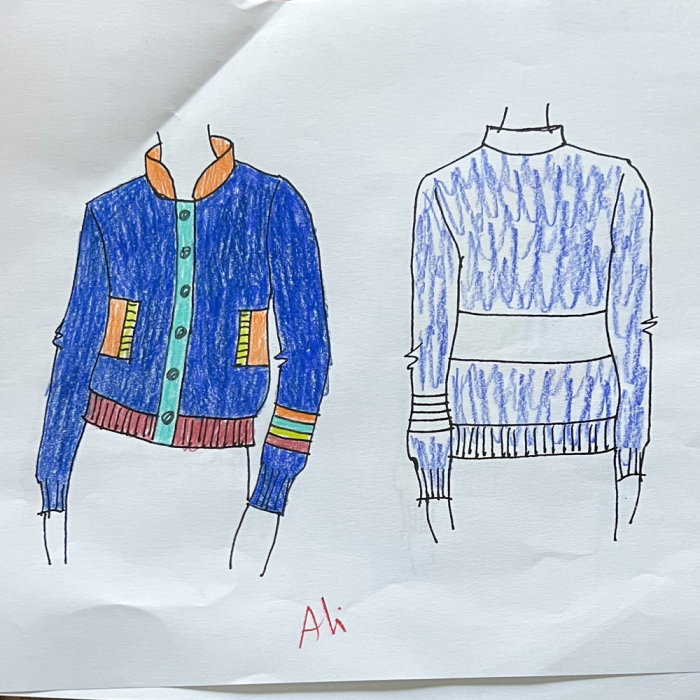 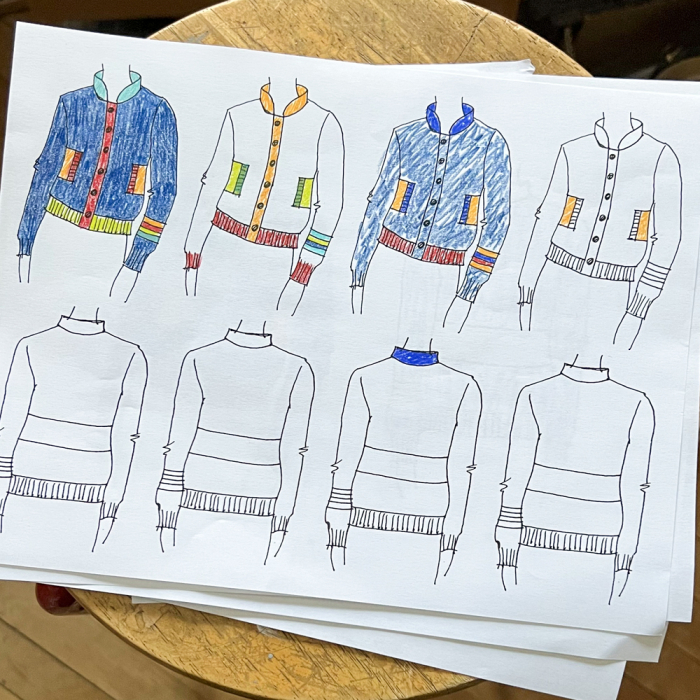 She also understood the brief and asked pertinent questions about how the knitting is done (is the button band separate, etc.).

So many great ideas! I've already knit a swatch and will cast on as soon as I decide which way to go! haha. I'll keep you posted!

Things are still crazy at work but beginning to settle a bit. My trip to London was SUPER fun! My birthday was great, too. Obviously, I'm not doing NaBloPoMo this year... I thought of it at the end of October and then again on the 2nd or 3rd and considered "catching up," but it's not happening. Oh well, 13 years is a damn good run! Hope all is well with you.

The letter Rainbow and all that colorful sweater advice - it's all wonderful! (I love that Ginny added a head and skirt to her model!)

The Letter Rainbow... LOVE! And now that will be in my mind for the foreseeable future! :)

I love the creativity of the kiddos with their sweaters! Brilliant!

First, happy belated birthday! I was following your trip on IG and it looks like it was delightful. I also love how you are planning this sweater so that it can be passed down. I look forward to seeing photos of the kiddos in it for years to come!

Oh, squeeeee!!! What a GREAT project, Vicki. (When I saw your rainbow post on IG, I thought you were going to knit EACH KID - AND ALI a sweater. I like your actual plan so much better!!!) And I have to thank you for two happy things, especially: (1) The Letter Rainbow . . . which I will be thinking about all the time now, and (2) sharing the 5 Point Bomber pattern . . . I'm already smitten . . .

Welcome back. I'm glad life is settling down a little bit for you. (And happy belated birthday, my friend.)

I love the Letter Rainbow! I can see how much fun the kids had coloring in those sweaters, can't wait to see you knit this up!

Happy birthday! Sounds like it was a great one, surrounded by your color artists. Now to see if you can incorporate some of each of their suggestions for this epic Bomber. Have fun!

Sounds like your birthday was wonderful. Love the Devan sweater-I think I'll knit one for my new granddaughter due in Feb. Have you recovered from your travels? I always need a few days of recovery time after a trip. I got thru Hurricane Nicole with only minor inconveniences. I feel badly for the counties south of here that still haven't recovered from Ian and now got hit again. Love Malina's rainbow letter. Such fun times with your grandies.

I love all the creative energy that flows through your house. The Rainbow sweater is a perfect way to play and fits into your oeuvre very well! Your last couple of months have been amazingly fun to watch and I enjoy being a part of your travels and your joy! Happy (late) Birthday, dear friend!

Belated Happy Birthday!!! Your kiddo grands are simply the best Vicki! What creativity and what fun. The smiles are wonderful (and I saw your recent pics on IG of Davy prancing around. He is a hoot!!!