For the first time since September, I'm joining Kat & the Unravelers today for Unraveled Wednesday! This is the colorbox of MDK Atlas yarn that I'm working with for the kids' sweater. I have enough of the main colors (Navy & Clementine) that I could knit this 5 Point Bomber in two colors per pattern specs but, based on preliminary discussion with the kids about their favorite colors, I also threw in Barn Red, Citron, Pear, Seaglass, Mallard, Lapis, and Tutu.

(Watch for coordinating hats & mittens with the leftovers!)

SNEAK PEEK JUST FOR YOU!! I played around in Photoshop (to the best of my limited ability) (see left sleeve cuff, front view) to color in Holli's sketches per my plan -- subject to change! 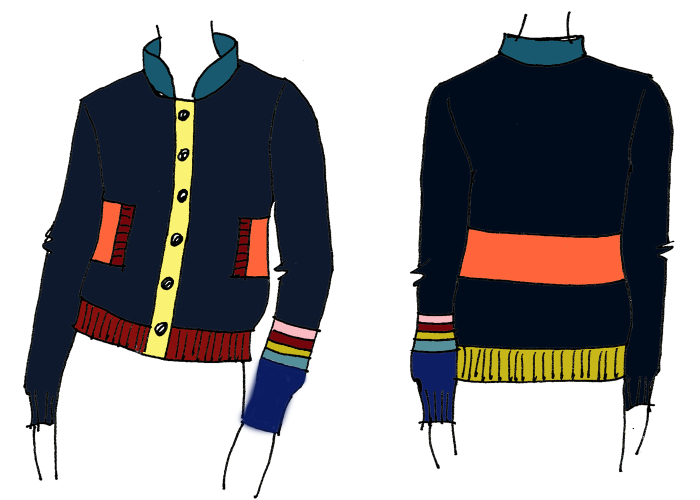 In fact, there's already been a small change. And there will definitely be more stripes -- somewhere -- and maybe bigger. I've incorporated every color -- the kids' favorites -- and I don't know how it's going to end, but this is a great starting point.

It's certainly not going to be everyone's cup of tea, but I love it!!

You may have seen my recent post on IG showing progress as of Monday night*. So far, there are two pieces started and I'll be casting on a third today. Rather than hunt around for stitch holders for all these bits & bobs, I just culled a few of my US5 needles from my collection! haha. 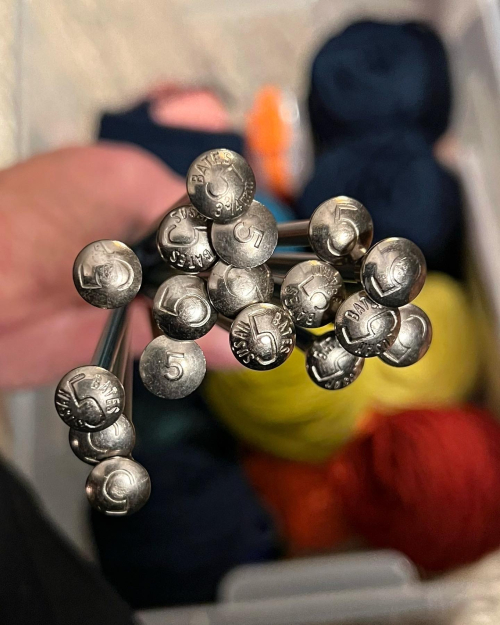 *Lately, and especially now that the days are short, I've been heading straight over to Annie's on Monday nights after work to get laundry started. Laundry is the most time-consuming part of running an Airbnb; it's not so bad at my house/Airbnb, where the laundry room is conveniently located where I live, but I was stopping over at Ann's in the evening (once or twice, depending), again in the morning on the way to work, and again after work. So much stopping! I decided a few weeks ago to just stay. One night, I watched the first episode of the first-ever season of The Great British Baking Show... and wished I had my knitting. Another night, I watched Dancing With The Stars (almost live), and had some knitting but didn't get much done (lost a DPN... rearranged my stitches... and then found it again just as I was leaving). This week, I packed up my slightly-more-portable (than the temperature blanket) 5 Point Bomber, and then spent almost all my time trying to find/watch Yellowstone S5. Good lord. We don't have cable TV, it wasn't on Paramount Plus (to which I subscribe), and who the eff knew that Paramount NETWORK was an entirely separate thing? (I didn't.) I ended up watching E1 (free) on my iPad, and I don't know what I'll end up doing for the rest. Will probably just have to put that out of my head until it becomes available on another platform. So dumb.

But I'm really happy with the sweater!!!!

So many lovely colors - this will be a terrific sweater, one I predict all the kids will look forward to their turn as it gets passed down to them! Many people have told me I should watch Yellowstone, but I don't want to subscribe to another streaming service, so I might just wait.

I love your ideas (and the kids' ideas and Ali's) for the sweater. It is so FUN!!! I have a bunch of those old knitting needles - from my Mom and my Aunt. Ha! I'm another one who has not watched Yellowstone, tho I hear it is good (Kevin Costner!!).

I'm pretty fascinated by your process with these sweaters! So many people have recommended Yellowstone but we don't have Paramount Plus either . . . at least I don't think we do. Some of this streaming stuff sure is confusing!

I love these sweater colors and hope you have something fun planned to do with the leftovers!

I share your frustration with trying to find things to watch. I have the hardest time figuring out where things can be watched -- there are just too many options! I wish there were a way to pick what you want to watch a la carte and just pay by the show.

The sweater looks like it will be very colorful. What an interesting pattern. I am hopeless when it comes to all the TV options.

I tried to figure out the Yellowstone thing as well... and did not know about the Plus/Network thing either. Grr!

I love your sweater thinking! So much!

I REALLY love what you're doing with the sweater, Vicki. I wondered how you'd end up pleasing all the kids . . . but I think you've got that covered really well. I can't wait to see it all unfold. And . . . ugh with the TV watching. It's so complicated to keep track of where the shows we want to watch are streaming . . . and if we HAVE the necessary streaming service to even watch them. (Such problems. . . ) XO

The sweater will be awesome and each kid will know that they played a part in the color choices. All that going back and forth to do laundry is daunting. At least you can knit and watch or listen to TV or podcasts. Have a happy turkey day.

Yellowstone—-DVDs from library, online amazon, buy the dvd from amazon

Those bomber jackets are gonna be awesome - so fun for the kiddos to design their own ... and then see them come to life! (also, wow! you have a LOT of size 5 needles!!)

That (those?) will be great sweater(s)! I suspect you may need to knit more than one due to demand.