On Saturday morning, I wound most of the rest of the MDK Atlas for the kids' sweater. 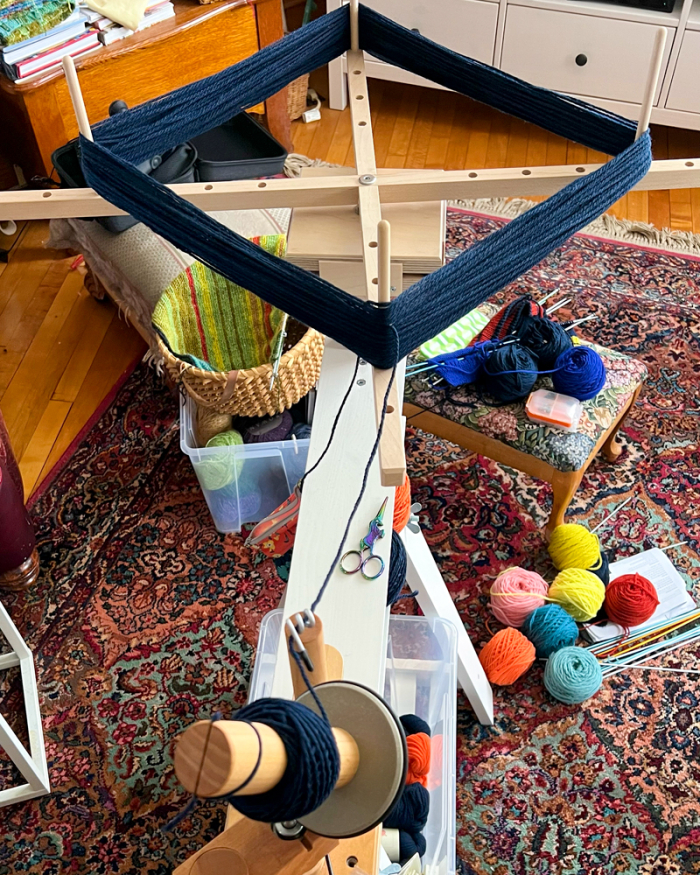 Then I hauled it all over to Ann's, where I spent the afternoon doing laundry and a little cleaning -- but mostly laundry -- along with knitting, sipping peppermint tea, and watching a little TV. There'd been seven guests there for the Thursday night football game, and to visit family (the parents grew up on the same street in the '40s & '50s, and Grandpa's old house is just at the end of the block)... there was a boatload of laundry! 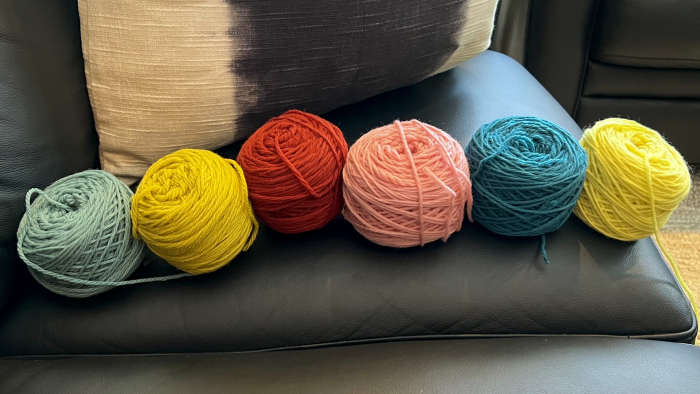 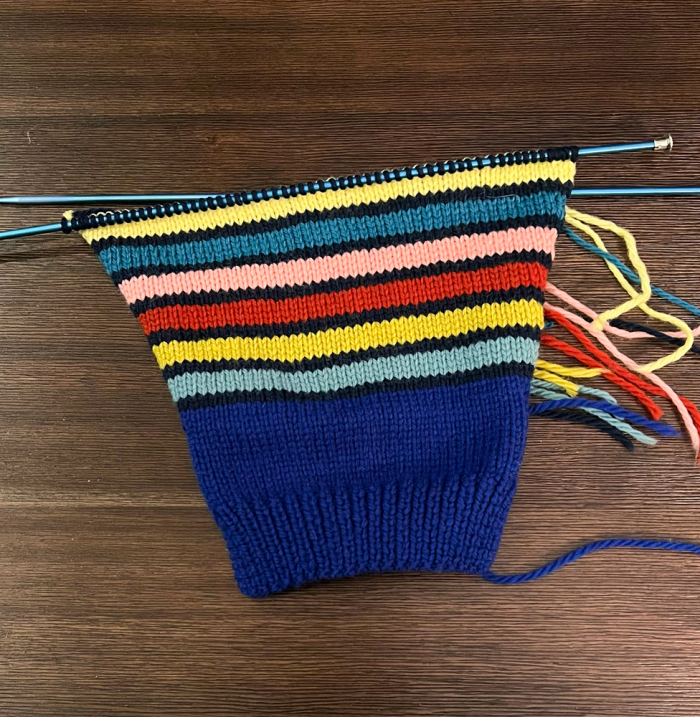 I really like how it turned out. And as of last night, that sleeve is finished!

The bright blue cuff is straight from Malina's design. Interestingly, Malina & Ginny made the stripes a contrasting color, but Ali is the only one who used more than one color, and Ginny is the only one who needed the symmetry of stripes on both sleeves! You can revisit all their designs here. I am considering stripes on the right sleeve, but on the upper arm instead? So many questions... the same sequence? reversed? mixed up? all the colors? wider stripes of just a couple-few colors?

Anyway, I spent the entire afternoon at Ann's and it was glorious!

On Sunday I was thinking about the upcoming week and cooking and cleaning. I started by cleaning the sink with the intention of doing a deep clean of the counters and the top of the "Depression Glass Cupboard" that is one of a few catch-all spots in the kitchen. I ended up doing a deep clean of one of the upper shelves in the kitchen to put away the cake stand I'd taken down for my birthday cake. It's been sitting on one of the counters for a couple of weeks now, because that shelf & everything on it was filthy... I just couldn't put it back, even though no one would ever know if I did! I even washed some of the glass panes. I'll tackle another shelf or two next weekend. It's just not fair that the inside of a mostly closed cupboard can get so dirty!

I did the top of the cupboard, too, but never got around to the counters. There's still time... and that's a lot easier in comparison! 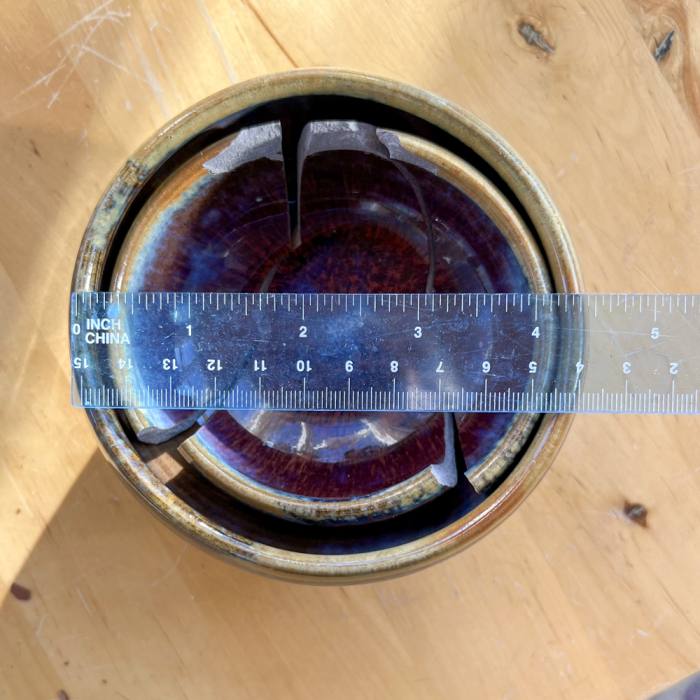 I only broke two things in my frenzy, one of which made me sad... the smaller of a couple of nesting bowls that Kate found in Fife. I happened to talk to her yesterday, and it happens that she needed an excuse to visit that shop again, and she'll find a replacement for me.

Tomorrow night I'm meeting Ali at Ann's to prepare for guests arriving for Thanksgiving. At this point, I have a few quiet weeks at my Airbnb, though I really know enough by now to be prepared for last-minute arrivals... especially now that I've said that aloud a couple of times. Anyway, the plan is that she'll come over for a little crafting time sans kiddos, too.

That sleeve is perfect and I'm glad you had time to knit in between all the laundry and cleaning. I used to get a bit overwhelmed that the laundry never ended when there were four people living here, and it's still that way with just two of us but there is less of it. I don't also have two Air BnB's to contend with, so no complaints here. Looking forward to more of the Bomber!

Love the progress on the sweater. Sorry about your bowl but maybe it was meant to be so Kate will have a purpose to shop in Fife again. Enjoy your Thanksgiving.

So sorry about those bowls, Vicki . . . but I'm glad Kate can pick up replacements for you. And Mountains of Laundry sounds like the downside of the airbnb business, but not so bad when it gives you time to knit! ;-) I love the stripes in the sleeves. The kids are going to be thrilled to see their design ideas come to life! Because the sweater is for kids, I think I'd add the stripes on the other sleeve. (My immediate idea when you mentioned it . . . was the same position ON the sleeve, but in different color-order.) Whatever you come up with, it will be brilliant I'm sure! XO

Oh, ugh. I am so sorry about those bowl casualties! Boo! I am nodding with Kym on the Mountains of Laundry... the only bonus for all that is knitting time! Ha!

I think that sweater is going to be so cute! I think YES on stripes on sleeve two! I think Kym's idea is a good one, or wider stripes... or yes, whatever moves you... because you are so creative!

That sleeve is fantastic! I love how you are using your time at Ann's to do the chores of AirBnB stuff but also setting apart as time for knitting and crafting.

I love the rainbow of stripes! What about switching the width of the stripes on the other sleeve? Then they'd sort of match. Sorry about the bowls -- but I'm glad getting replacements is possible.

If you ask me -- which you didn't, so that this advice for exactly how much you paid for it -- you should put similar stripes on the other sleeve -- in the upper arm. A little slightly out-of-balance symetry :)

Love the sleeve and love the idea of another one...different...but similar...and love that the kids' ideas have been incorporated. I was thinking about AirBnB stuff since we booked another one in Austin for Christmas. I don't envy you that "job/chore." Happy Thanksgiving!!

oops, I don't know how I missed this post (and I'm glad I wasn't more behind with your blog than I feared). Those sweaters are so much fun to WATCH - truly, your creative/color process is a JOY to behold! I do hope Kate finds that replacement bowl - and kudos for all the cleaning. Know you enjoyed a fun Thanksgiving and I look forward to reading about that ...soon!!

"Haul" is such a good word for moving our yarn around. . .

I have never had any luck with a swift, so I envy what your photo shows.