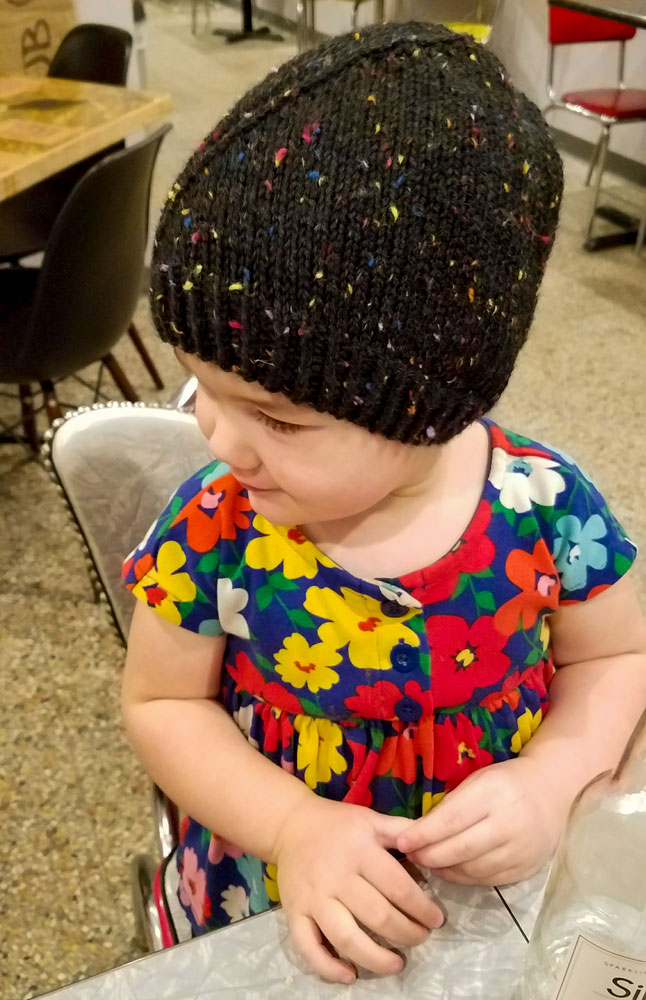 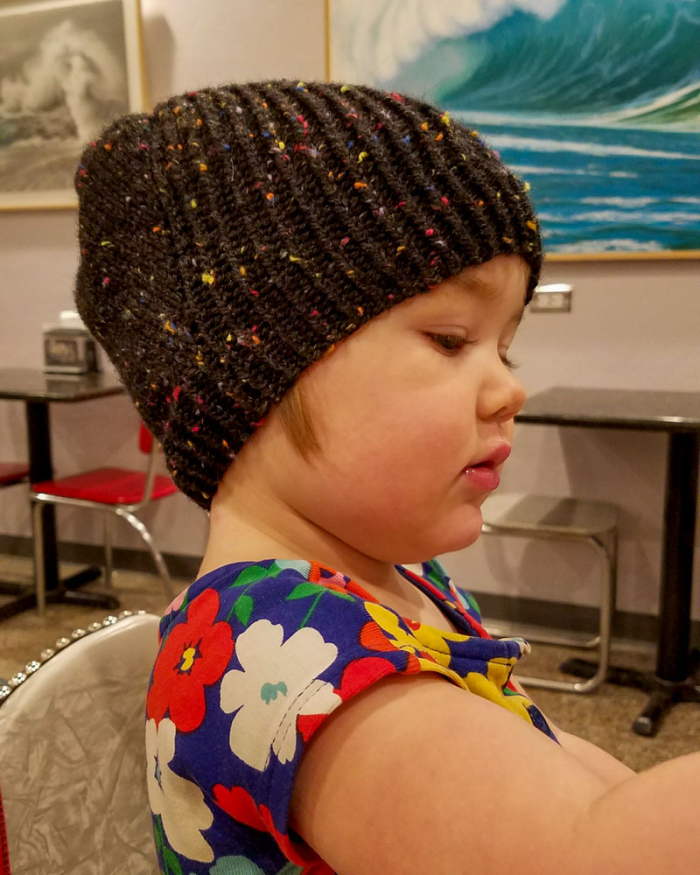 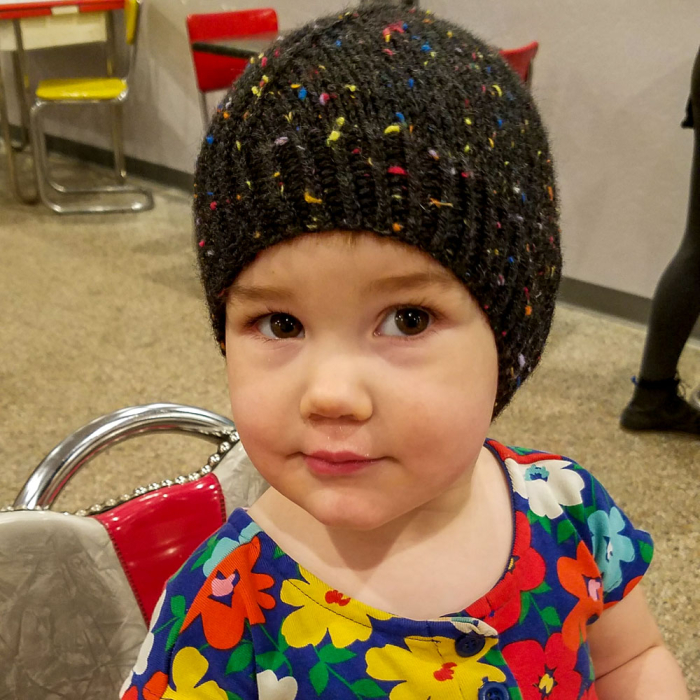 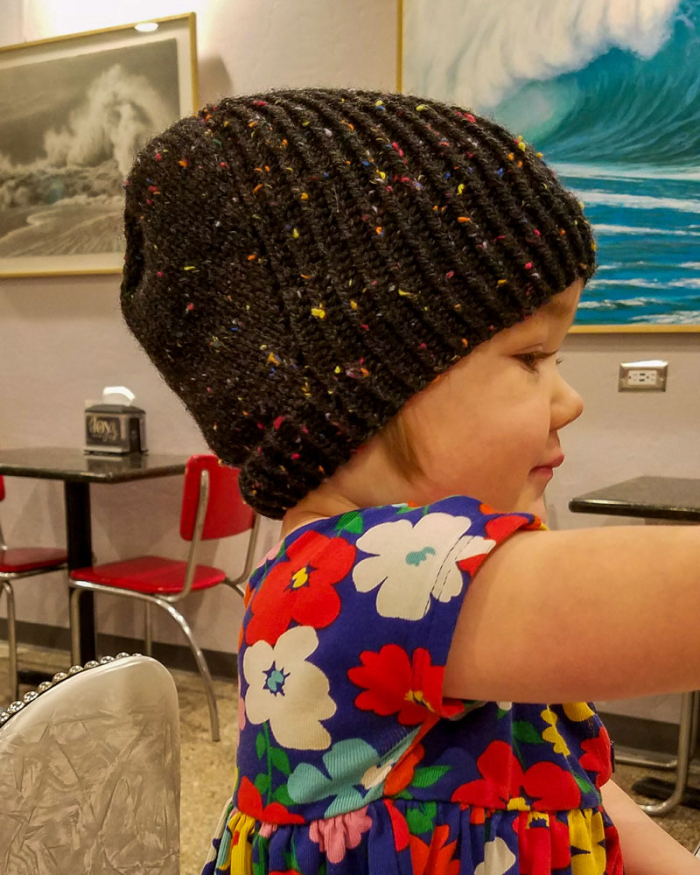 Super cute. Fun & quick to knit, with the twisted rib section adding just enough to keep it interesting. I finished at Knit Night last night, and the kids just happened to be there! 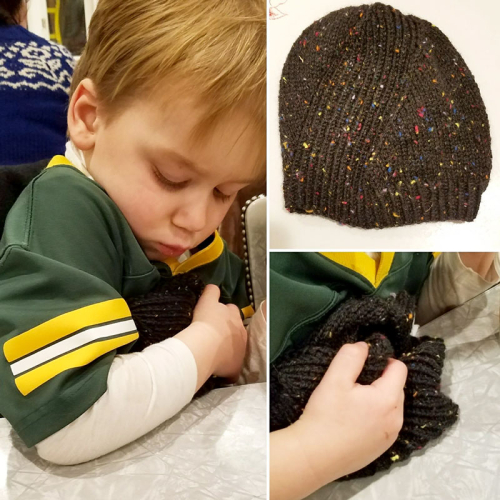 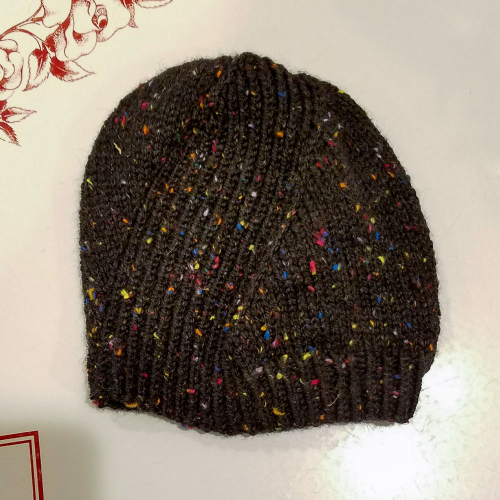 It was knit for Jün and he tried it on, but he did not want photos nor did he want to give it back! (I nabbed it later when he wasn't looking, and then Gin "volunteered" to model.)

Meanwhile, here's a snapshot of knitting accomplished in 2017: 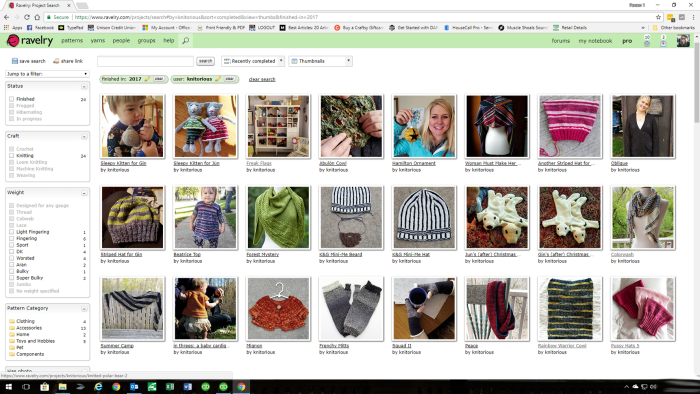 No one is more surprised than me that I finished 24+ items last year!

(By comparison, I finished a grand total of nine items in 2016. Not my best knitting year.)

I was a fairly monogamous knitter last year, starting & completing projects in reasonable time, with focus & purpose. I think I started only three projects last year that remain unfinished: another pair of Squad Mitts, a gnome, and my Brambling Shawl. I didn't make any big plans or goals, just went with my heart... and I think I'll just stick with that!! 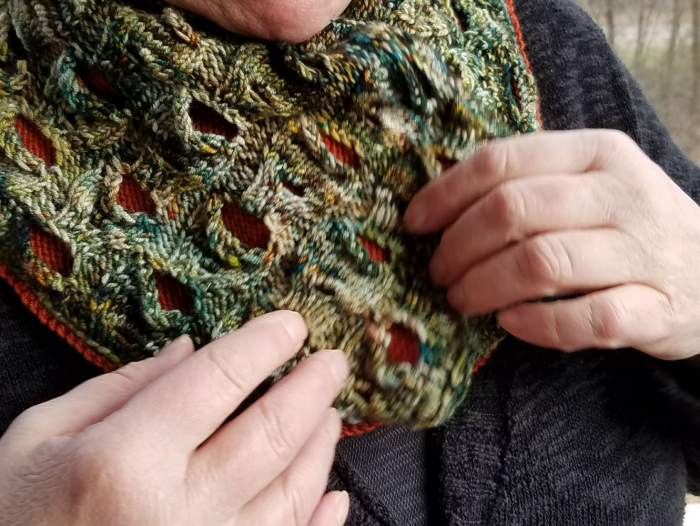 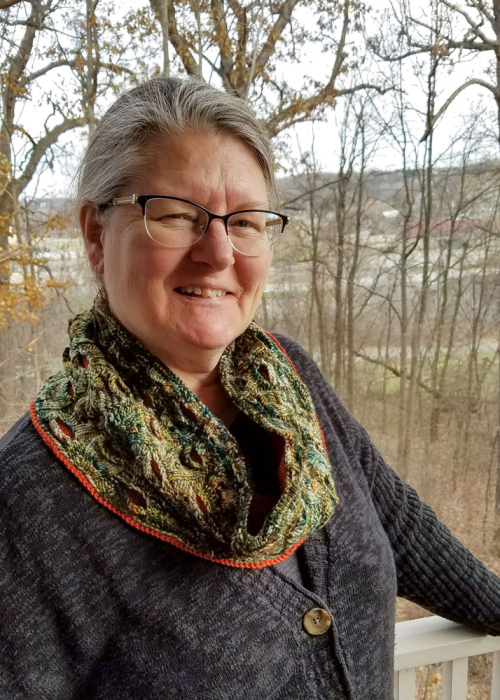 I'm fiddling with it a bit in that first photo because it's just a bit bigger/drapier than I like my cowls to be. 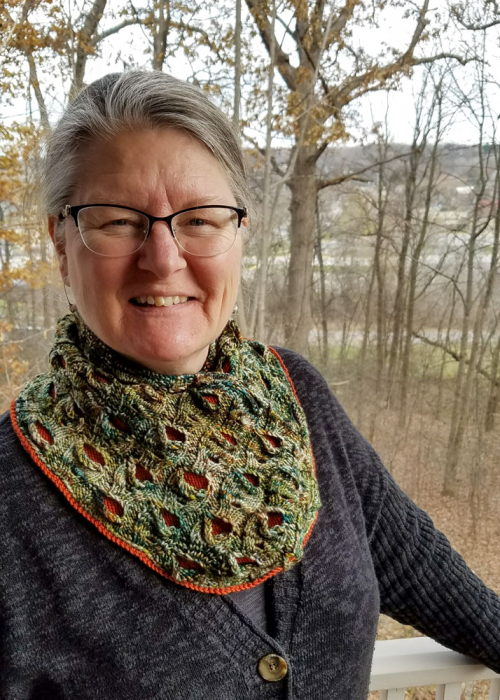 So my photographer (thanks Kate!) & I tried a different arrangement. I'm not sure I like this, either, it looks like a bib or something... maybe it needs a pin. I need to play around! 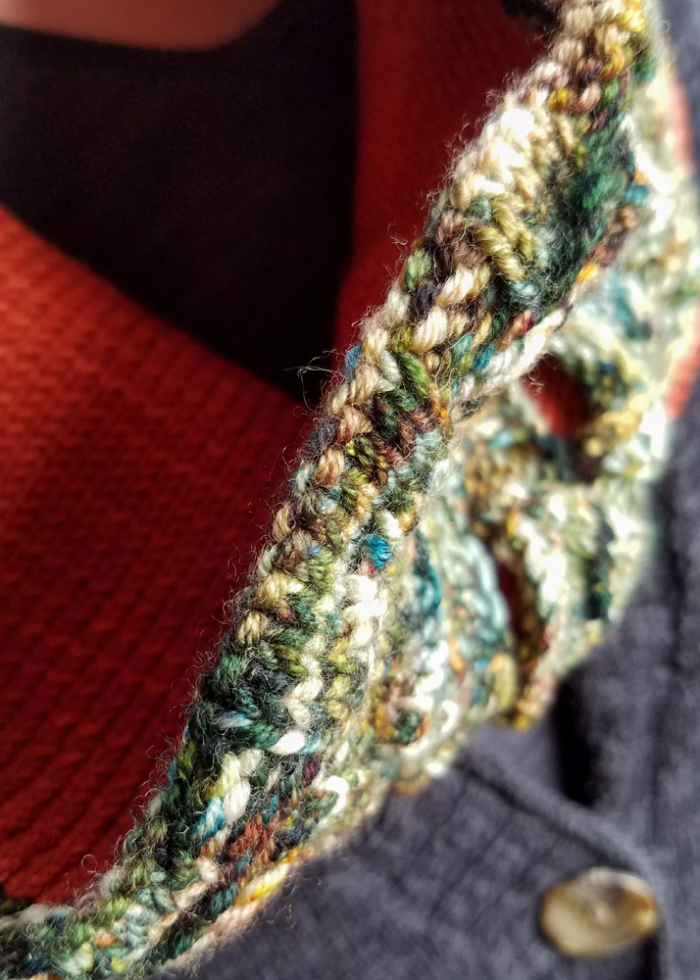 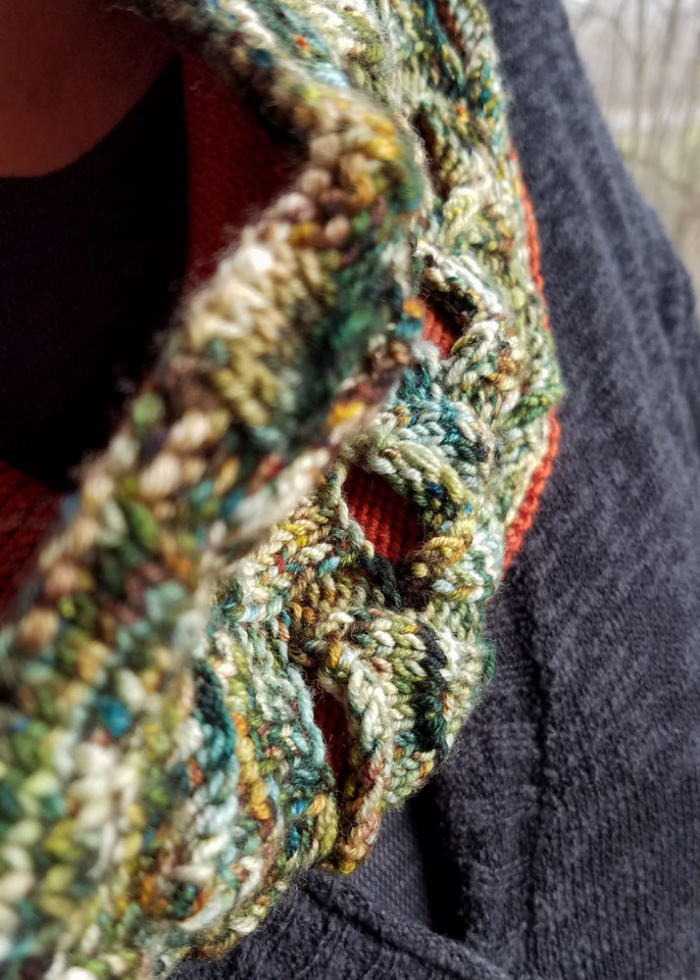 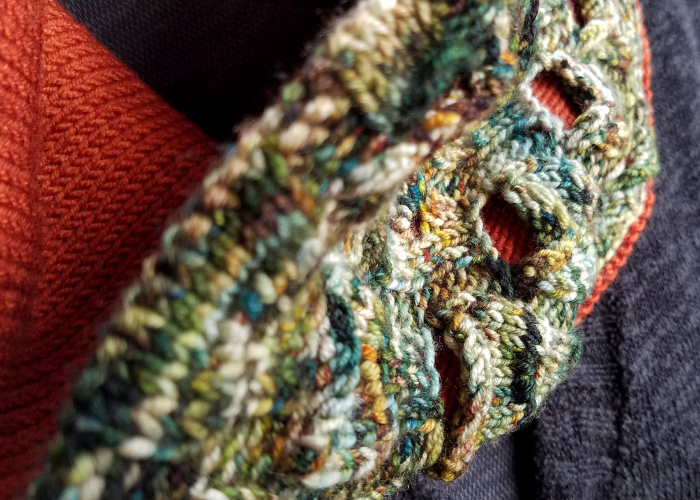 One thing you can't argue about is the beauty of that stitch pattern; combined with an eye-catching backing layer, it is next-level!

By the way, I first noticed that stitch pattern, sans background, in Melanie Berg's Open Waters Shawl and Cowl, published in Making No. 2 / Fauna. I am going to knit that shawl someday! Gorgeous!!

Anyway, I toyed with the idea of casting on another of these cowls with fewer repeats, but there's too much other stuff happening right now. One more look... 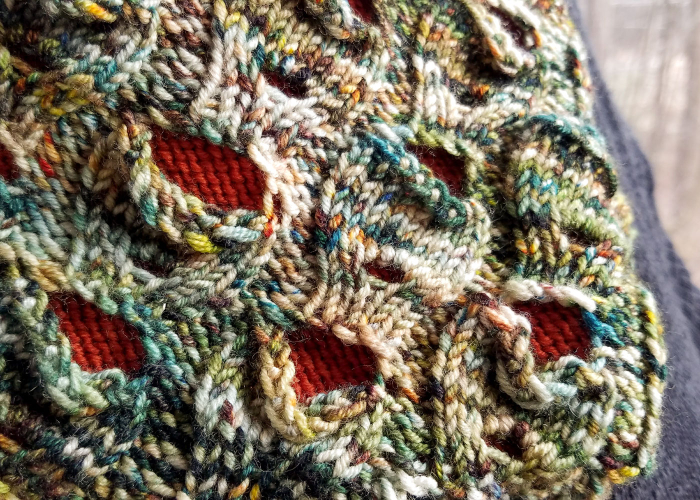 And that wraps up another NaBloPoMo! It's been a fun month blogging and reading. Thanks for being part of it all! 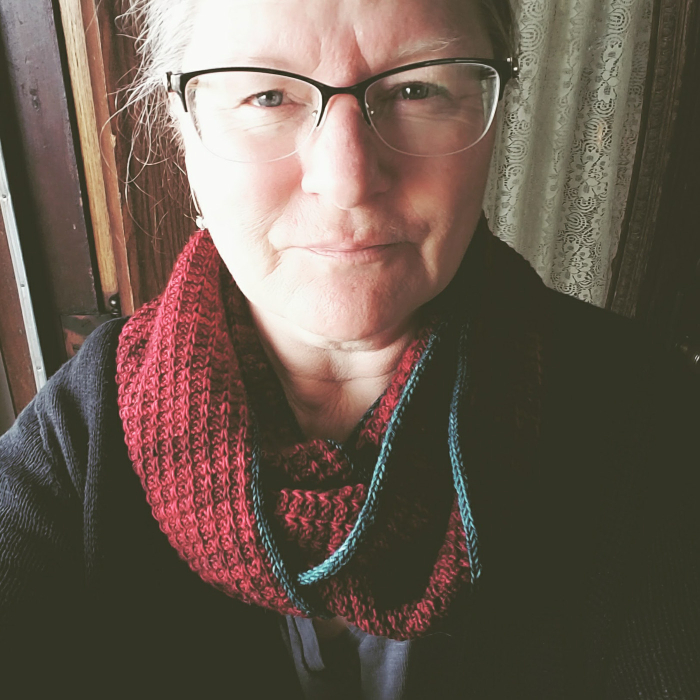 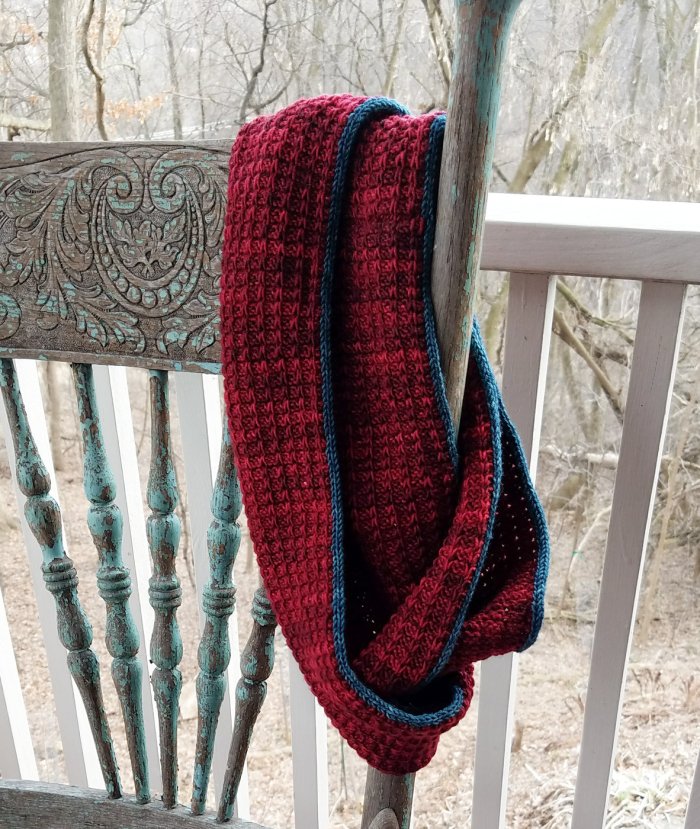 Knitting in the round on a circular needle is my least favorite way to knit. I loved the whole idea behind this project, but didn't have any "peaceful feelings" about making it until it was suggested that the pattern be modified. Of course!

I did a few calculations and ended up provisionally casting on 45 stitches, working a 3-stitch I-cord in contrasting color on each side of the 39-row pattern. I knit and knit and knit -- 210 pattern repeats, and finished with a 3-needle bind off.

It turned out quite nice. I might have made it a little wider and/or a little shorter, but it makes a nice couple of nice loops 'round my neck right now, and I love the colors.

Hey, it's FRIDAY!! I woke up this morning to snow mingled with "wintry mix" and a couple flashes of light followed by rumbling... THUNDERSNOW!

Tomorrow is the final day of the Best Picture Festival and I'm looking forward to that, and then the OSCARS on Sunday night! Tomorrow's line up is Fences, Lion, Arrival, Manchester By The Sea, and Moonlight (which I've already seen, so will likely skip... five movies in one day is a lot!). 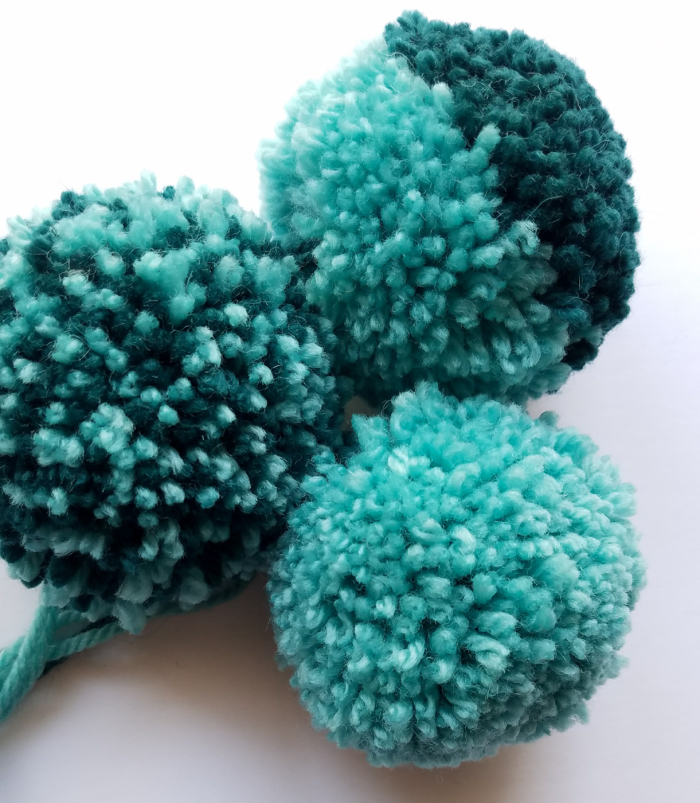 There's going to be some serious stash-busting/leftover-using pom pom making around here. So fun! 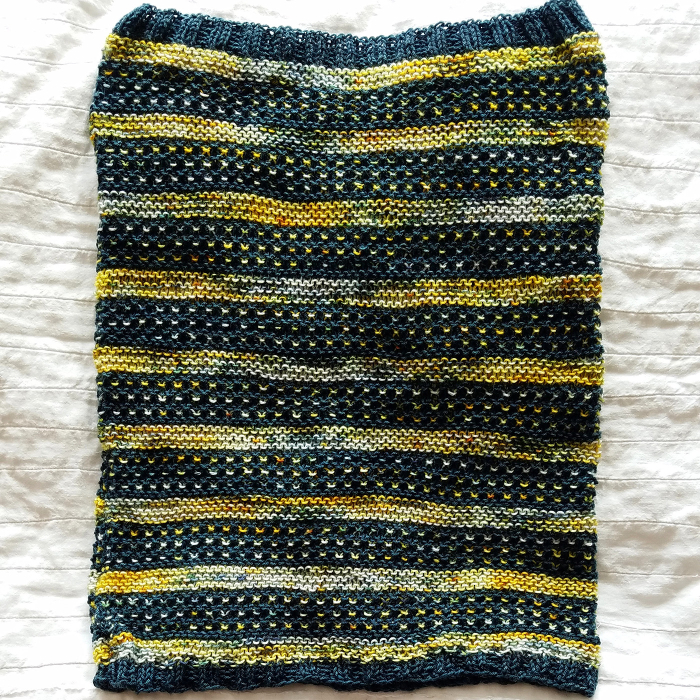 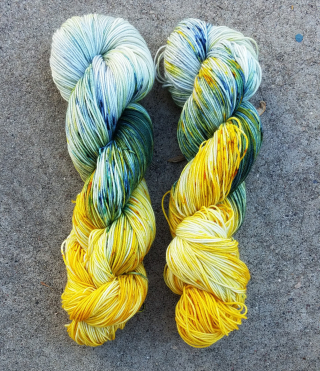 I dyed the "colorful" yarn back in November. I kept one hank for myself, and must have taken the other to the shop. For the striped cowl, I combined it with some indigo yarn that I'd dyed at some earlier date and I love how it turned out! In the knitting up, the other colors played very well with and toned down even the brightest bright yellow, and the solid indigo helped to subdue it all even further. Not that I don't like brights, but YIKES! 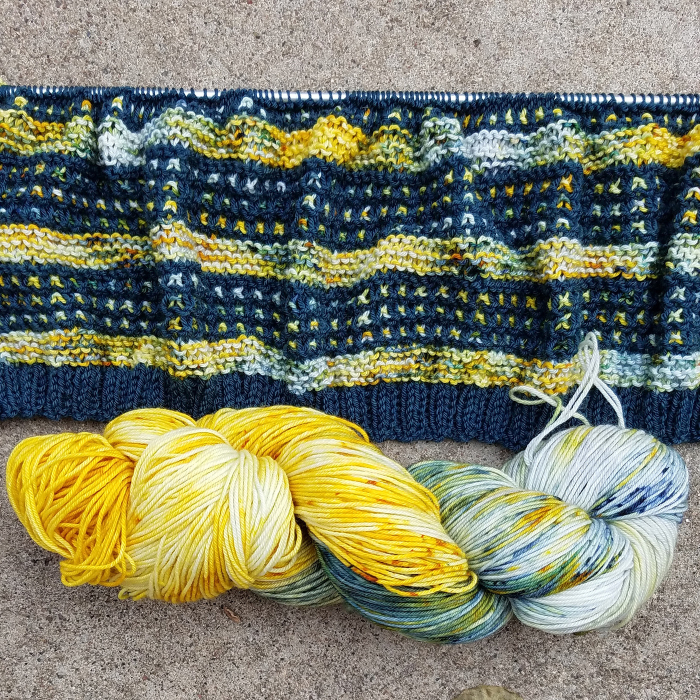 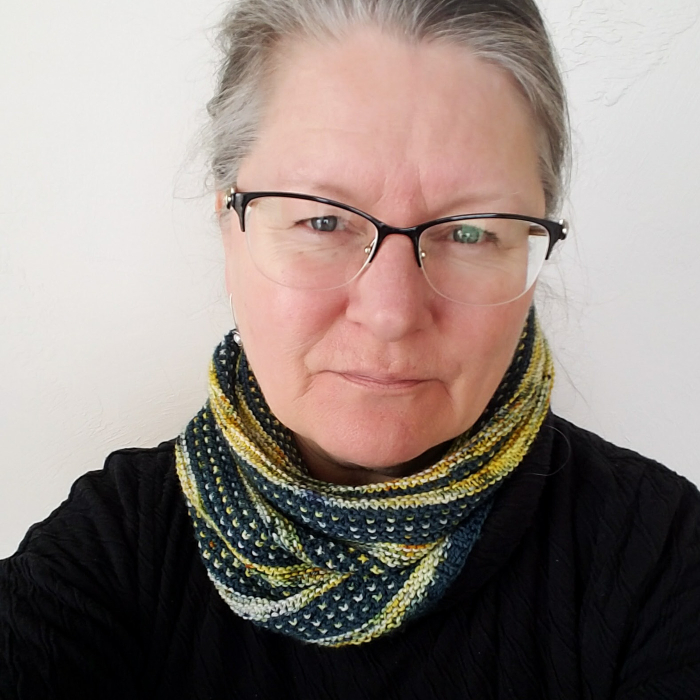