I'm joining Kat & the Unravelers today to share my latest FO! (Though possibly not linked up because... writing in advance & timing.) 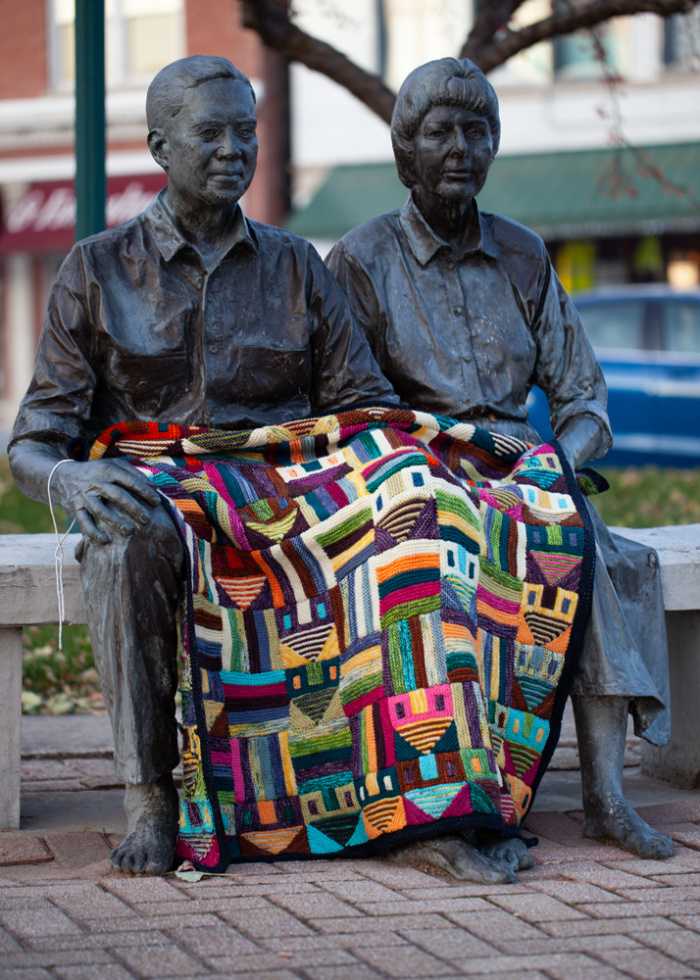 Before giving the blanket to Davy, I wanted to take a few more photos... similar to the ones I took at a local sculpture park when I finished Parcheesi! This park is just a few doors down from Kaukauna Coffee & Tea, but timing/daylight has not been on my side. After work on Mondays, I pick up & deliver an order to the coffee shop, and this week I made sure to grab my camera & the blanket on my way out the door.

I was so excited to take these photos, I didn't even notice that the blanket was upside-down at first! 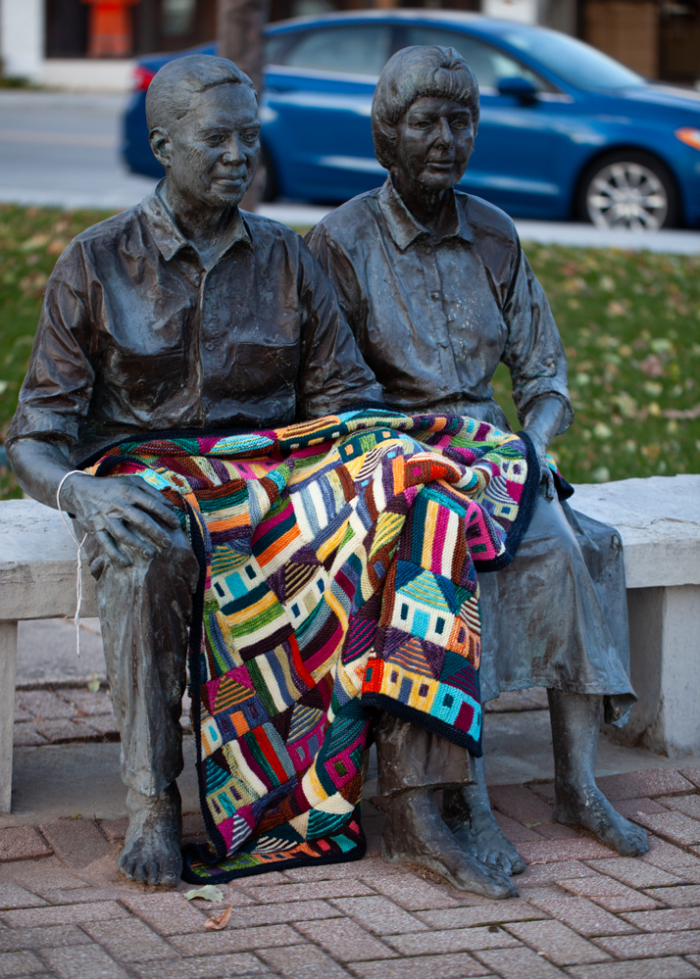 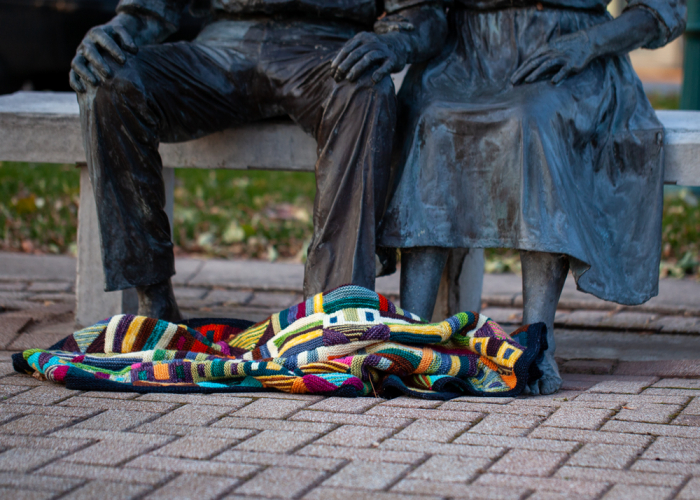 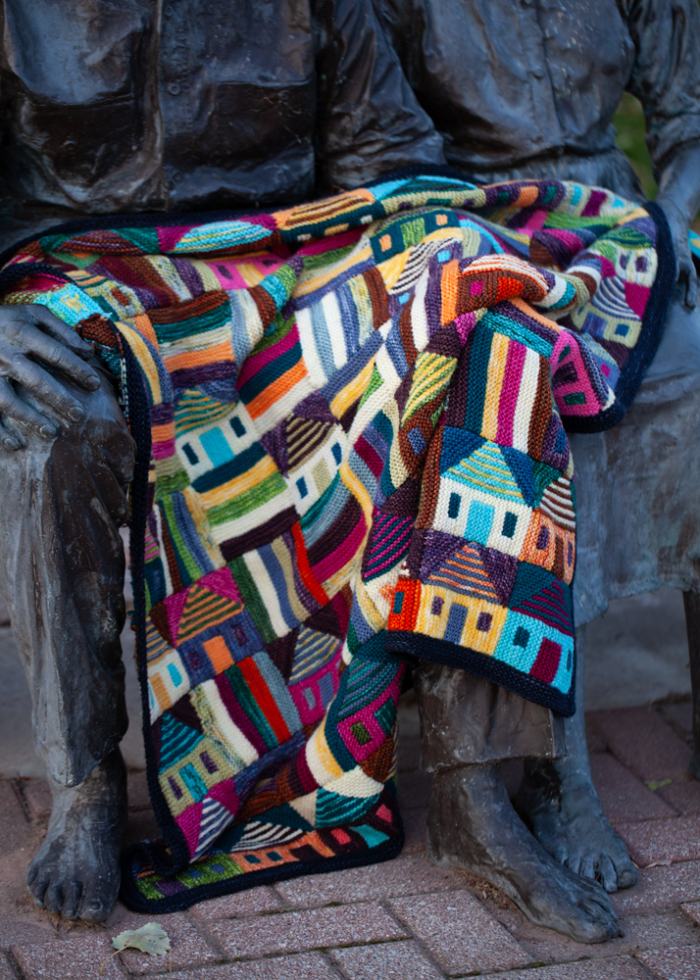 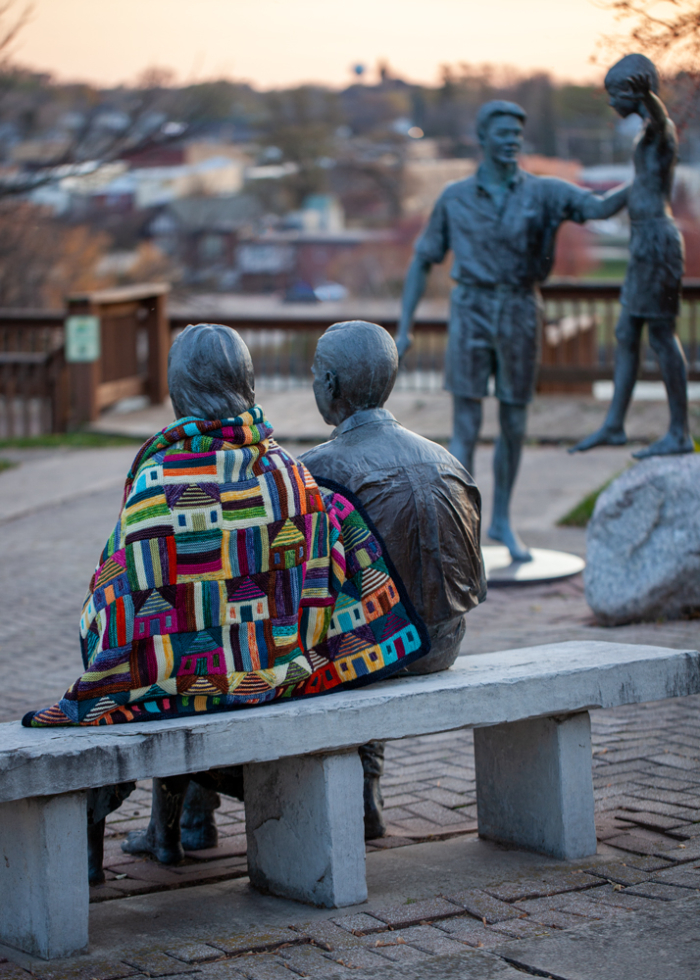 Modifications! First was in the choice of yarn, I guess, using fingering/sock held double instead of worsted. I did not want to buy more* yarn and that's what I have most of... so I made it work. A color card helped me sort it all out and keep track -- most colors had multiples to choose from and/or to blend, and I made lots of combos while I knit, making subtle differences & variations in some of the colors.

*BUT OF COURSE I BOUGHT MORE YARN!! I had a lovely mini-skein of pink -- actually, it was orchid from Backyard Fiberworks -- and it quickly became my go-to for pink, so I ran out. Because of timing, I had to find something to match locally as best I could, and actually ended up buying TWO in order to get it close. That orchid, though... it was one of four or five mini-skeins that I'd picked up at Indie Untangled 2018, I think... and I might need to treat myself to a full hank!

And while I love the rows-upon-rows-upon-rows of houses in the original design, I just could not see myself knitting them all. Each house is basically a square, and that led me to think of a patchwork quilt... Parcheesi was also on my mind, of course, and outside of a few actual squares, the main feature of that design is stripes... and I really love stripes (plus, they're quick to knit), so... 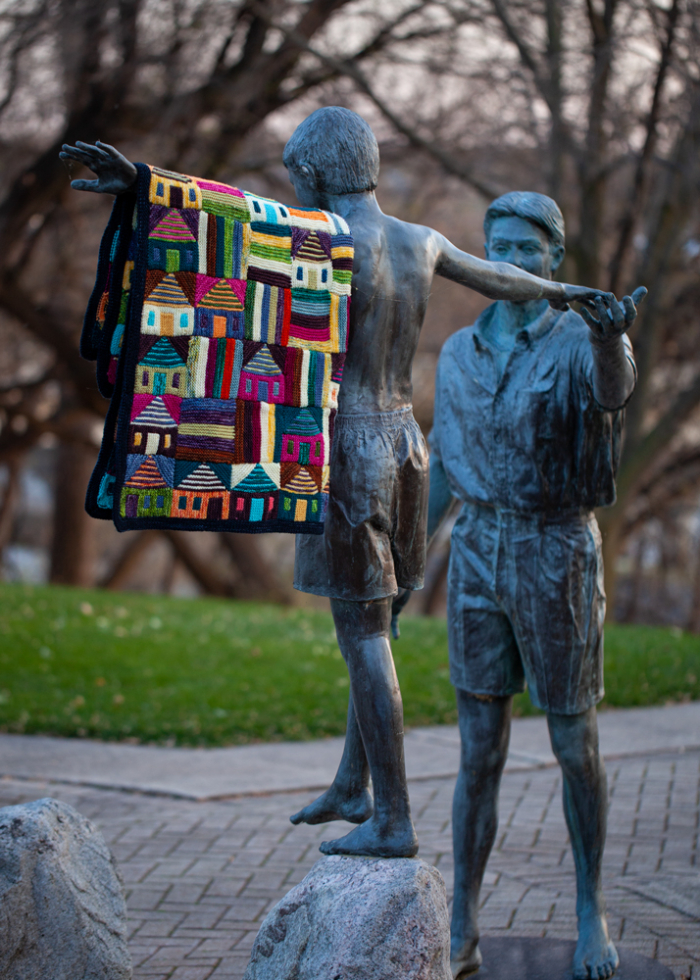 ...I started to play around. Margaret provided a "coloring page" to aid in planning, and that's where I started. I knew the whole thing would be bordered in houses, so that left the interior -- 7 x 7 squares. I made alternating blocks of horizontal & vertical stripes, and then added some houses -- I settled on two extra houses per row, which I placed using a random number generator!

For the striped blocks, I used the same combo of colors that would have been used if they'd been houses, but each had one more stripe than colors specified, so I made some sort of "rule" where I used the "house color" from the block two before... something like that. Heh. 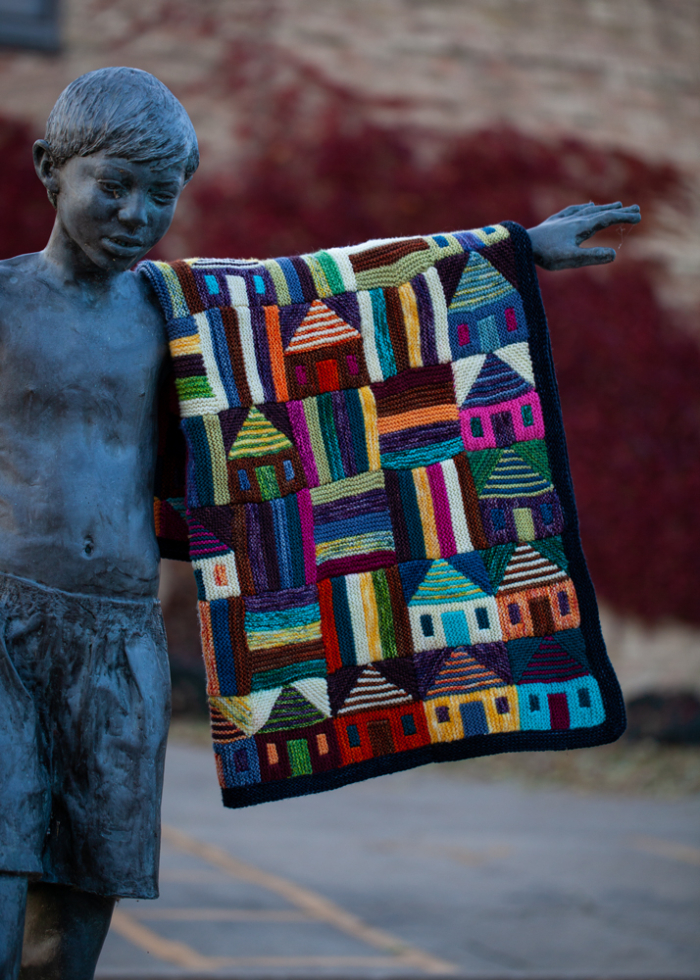 And just as with Parcheesi, I knew I wanted a border. It would help to hide a few of the cut ends around the edges, for one thing, and I love how it makes a frame around the whole thing. I used a blue-ish black. First I knit along four houses at each corner with a mitered garter stitch border, then picked up and knit along the remaining five houses on each side, finishing with several short seams to bring it all together.

At one time, I'd toyed with doing some crazy border stuff -- a different color for each house -- but I really like how the single color works. As my sister Sharon would say, "The eye needs a place to rest."

Speaking of Sharon, I thought of her a lot while I knit this blanket. Rarely have I remained so focused on a single project, start-to-finish, but Parcheesi was one. I wasn't even quite this focused when I knit Parcheesi -- it took two months longer, and I remember a long break while I mustered the strength to begin sewing up! Anyway, that was 10 years ago, and Sharon was dying. I didn't even realize, at the time, how important that project was in helping me get through all that. I had similar focus on a shawl when my mom died. And now, this blanket... so aptly named for THESE TIMES, and definitely helping me to get through... 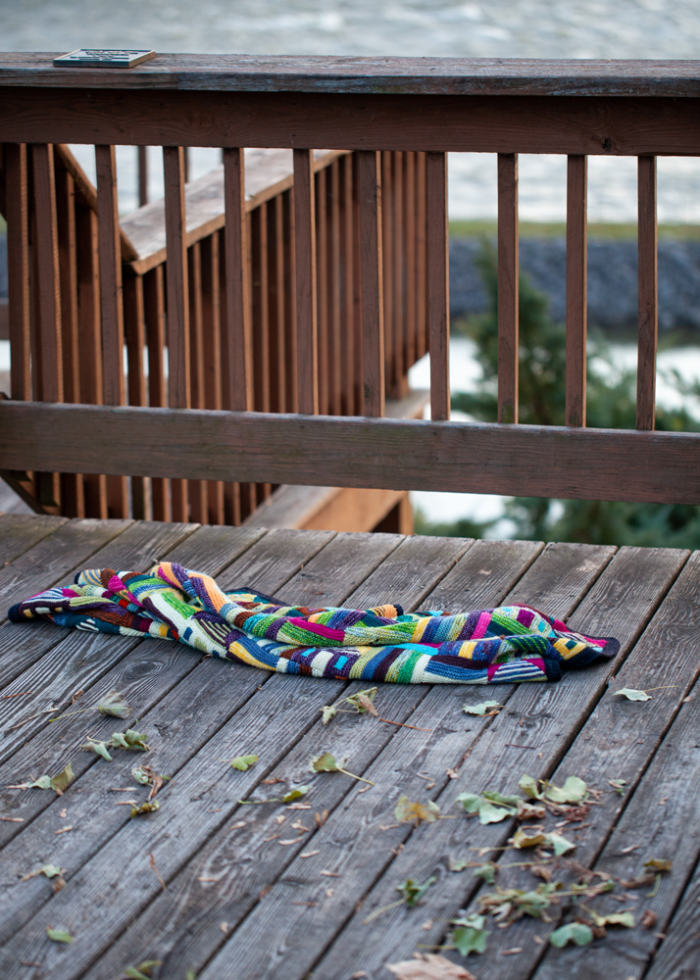 And that's a wrap!

We're on our way to the North Shore of Lake Superior for a few days. Rusty & I are staying at a lovely lakeside cottage, and Kate will be camping in Ducky about 20 miles north. There might be a little leftover snow on the ground when we arrive, but the weather is going to be gorgeous... for November in Minnesota! We'd actually sort of hoped for some weather -- big waves and all that -- but we'll survive. There's a heater for Ducky, so Kate should be fine... and a fold-out in our cottage if things take a sudden turn.