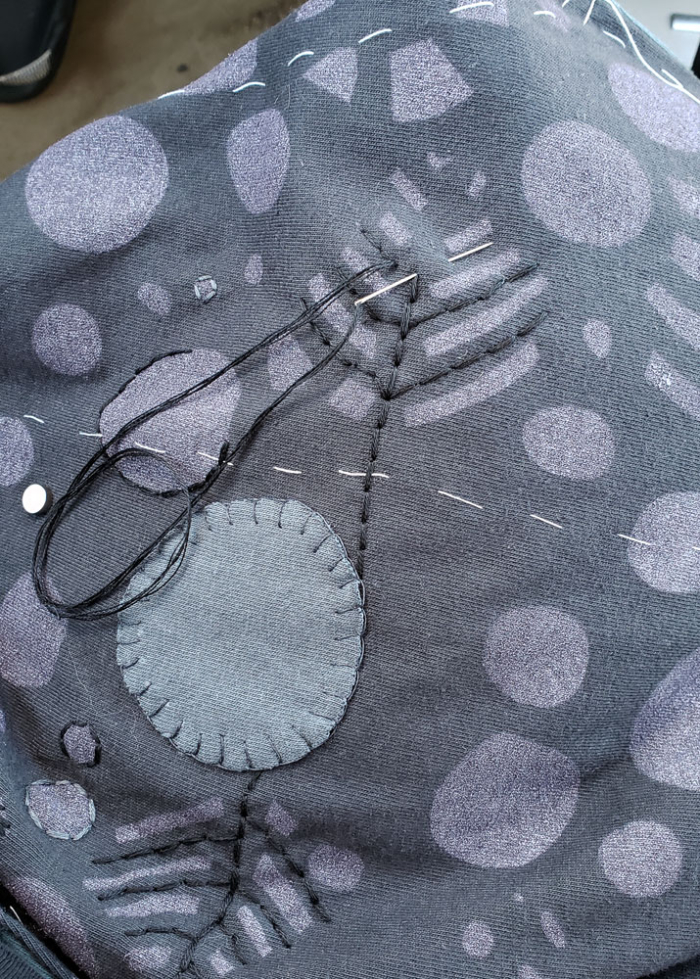 The photo above was taken Wednesday while I hung out in the cell phone lot at O'Hare for over an hour. I would have been really mad if I hadn't had something to do... though I did manage a pretty good nap, too.

The photos above are where I was on Sunday when I began. I've been stitching everyday and trying not to over-think it. I may have to bust out the beads pretty soon, though, just to get the visual/balance. 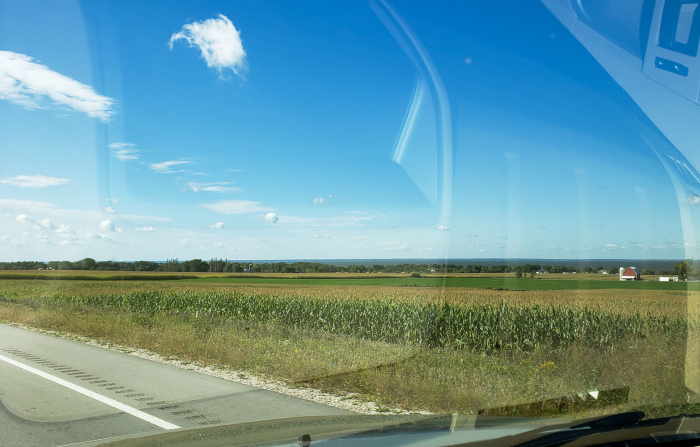 It was a beautiful day for a drive, and I began by driving my favorite route down the east side of the lake -- two lanes, farm country, great views.

Kate's back from the UK, but with a cold! Thankfully, she's not scheduled for work until tomorrow so has been able to rest and recover a little bit. She brought YARN!! I'll share that next week -- a hank for me and two for her. It must truly be autumn now because, like clockwork, Kate's got the urge to knit!

Last night, in addition to working on my jacket, I mended a shirt that's been out of commission for quite a few years. It's an all-time favorite, so it's been taking up space in my (very small) closet even though I haven't worn it. I went in search of matching thread on Tuesday and came home with two very excellent contenders. I'm glad I bought both because it's really all about the lighting (and they were 50% off, so it was basically 2-for-1).

In the photo at left, I've already repaired one very very tiny hole (can you see it? click for big), and one of the larger ones has been done in the photo at right. They're not perfect, but they'll do. Honestly, I've had to hunt down the similar repairs that I made in a black dress -- I think black is more forgiving, anyway, but still... I made those mends, you'd think I'd have no problem find them again! 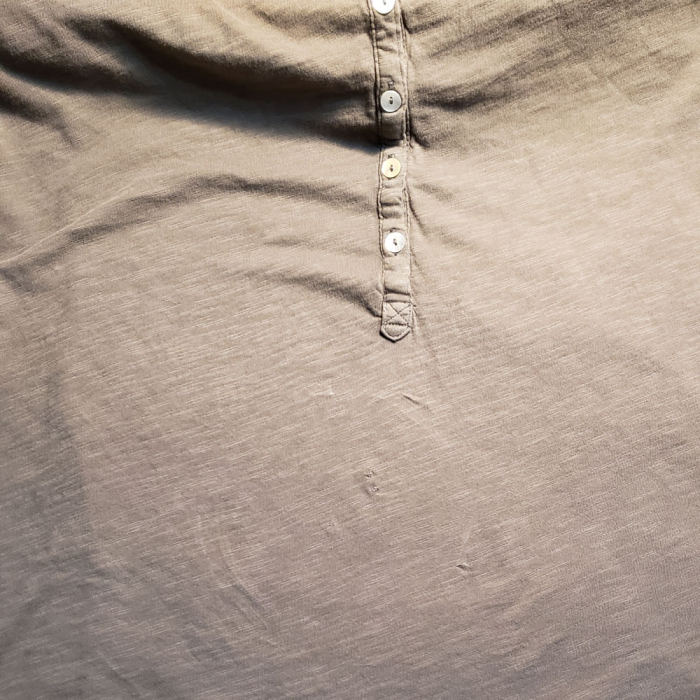 Here, they're all finished. I used a hoop, which I never do, but it's how I was taught... and next time I'm going to try without because I feel like it almost made another hole (even though it wasn't stretched or clamped tightly at all). Anyway, this will be laundered today or tomorrow, then worn tomorrow night to a talk about The History of the Handkerchief, the closing event for the textile show SURFACING, which was also related to the Visible Mending Workshop that I attended earlier this month -- all blogged about here -- and where a few of my fellow workshop attendees will also be present and I can show off! (Haha. I'm not much of a show-off... too much... usually... this might be worthy.)

I present this, sent to me yesterday, to end on a high note: 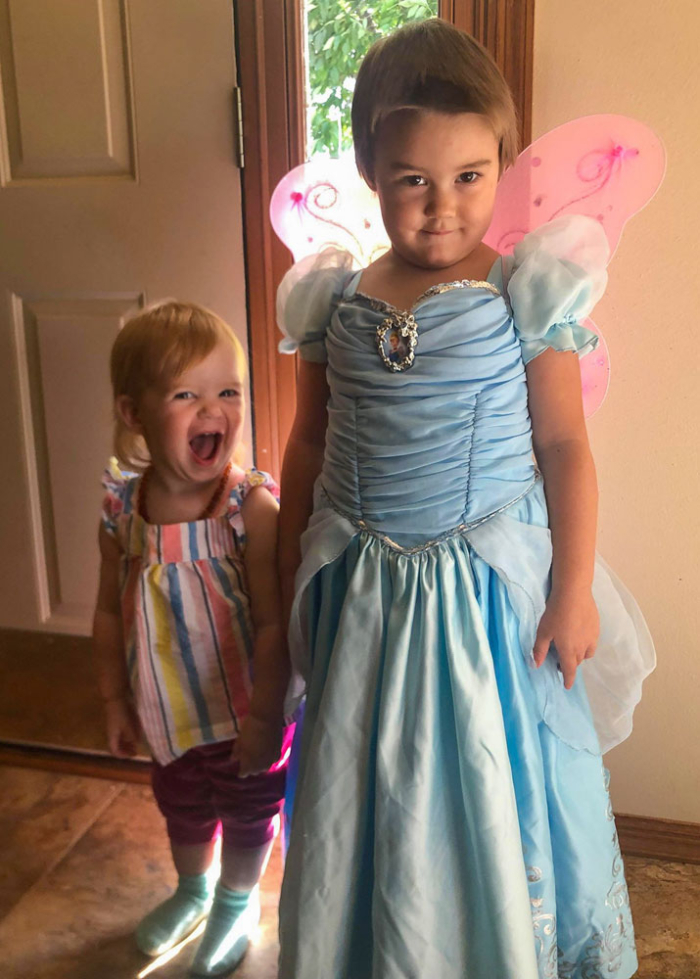 Have a great weekend!!

I had Junah & Ginny for a large part of the day on Saturday while Ali ran some errands, but managed to get organized and accomplish a few things before & after they were here. 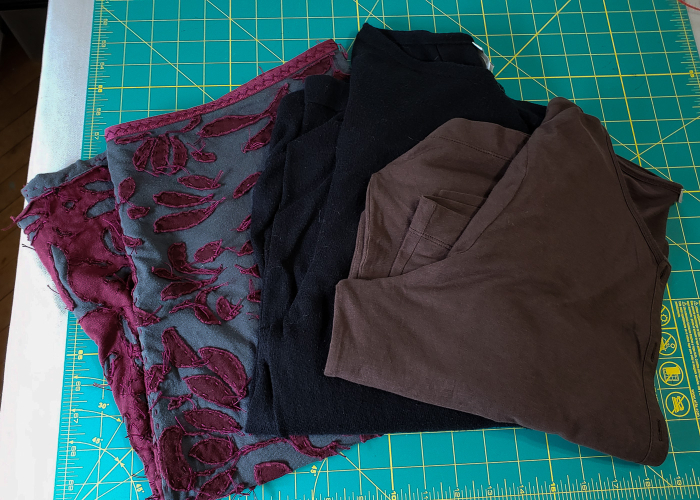 Though I've been wearing it with no problems, there have been two small holes in my Alabama Chanin Anna's Garden Swing Skirt almost from the moment I first pulled it on. The stitching may have been a bit tight on one of the applique pieces because the holes were on either side of just that one piece. Fixed!

An often-worn black sweater from J.Jill had some holes in seam lines, so I stitched & reinforced them. Fixed!

The lightweight brown cardigan is also from J.Jill and was my mom's. It had a tiny little hole in a really weird spot (right between the boob and armpit area -- possibly snagged on a purse strap/buckle?). It's apparently taken me almost four years to figure out how to fix it. I just stitched it up with some brown thread after determining that it's really not a highly visible area... but would be very noticeable if I did anything more than that! Fixed!

Not shown, a long wool Eileen Fisher coat that Kate snagged on super-duper clearance a few years ago. There were some holes in seams, a big hole in the butt area, and some small holes in one of the pockets... and it needed washing. Fixed!

Then it was time for The Big One. Another J.Jill sweater that I've had & worn for at least a couple of years. I put it on the other day and thought to myself that the elbows were looking a little thin and, sure enough, by noon there was a hole in one of them!

There's a great article by Bristol Ivy in the latest issue of Making, No. 5 / COLOR about a few different methods for mending knits, and a woven patch seemed the way to go for my project. 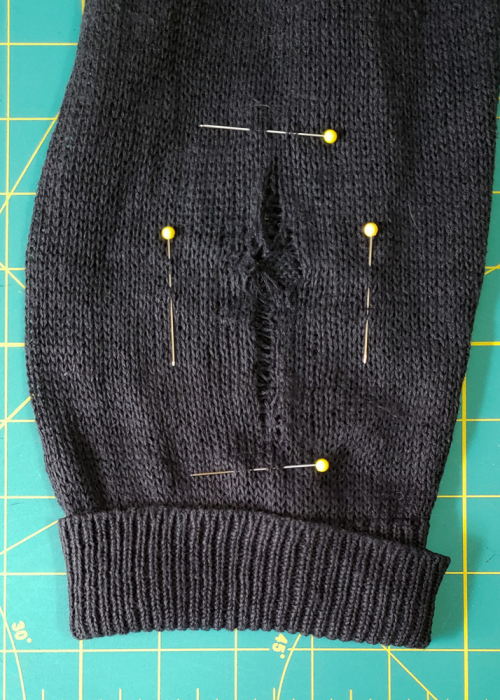 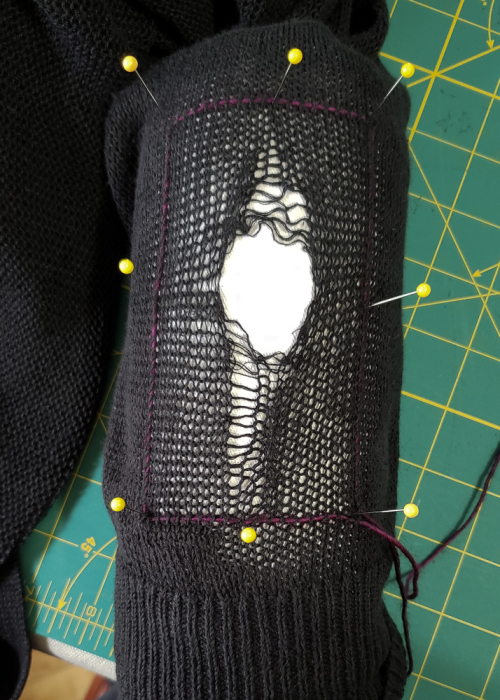 I roughly marked the area with pins, stuck a little ham in the sleeve (for contrast as much as anything else), and started weaving. First, to establish the perimeter... 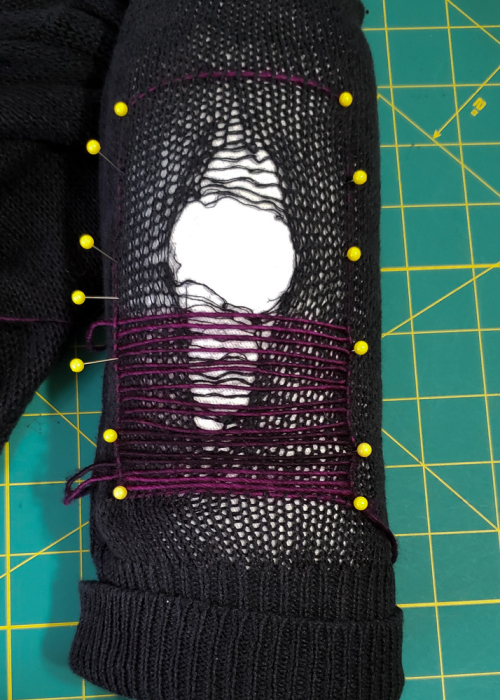 Then back and forth horizontally (these are not technical terms!). I love the idea of "visible mending," so chose a yarn with a little personality -- a bit of a Madelinetosh Unicorn Tail that I dug out of the leftovers. 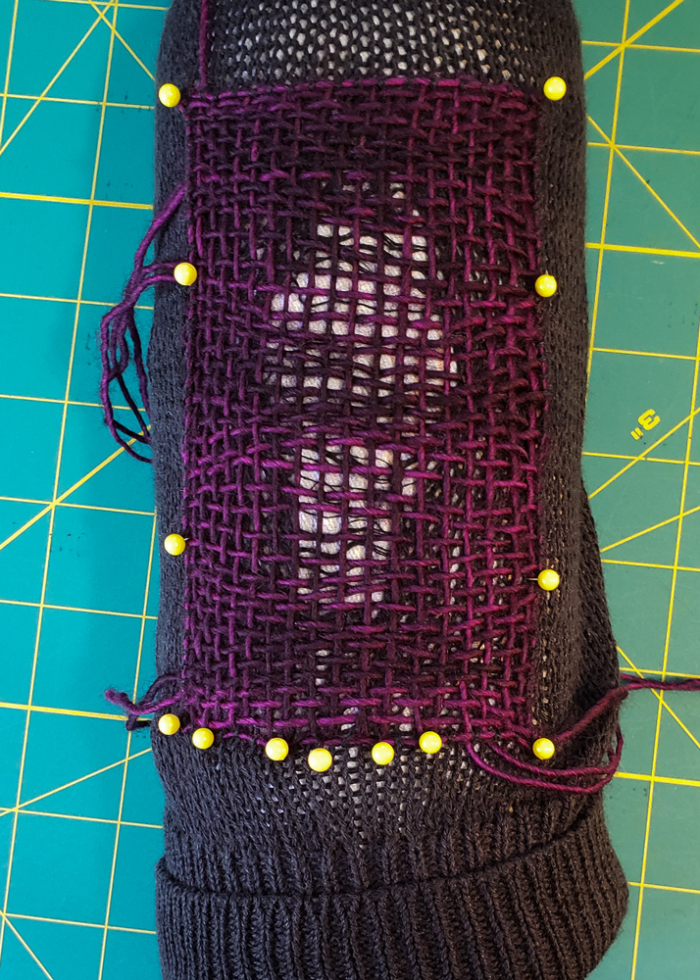 I wasn't far into the vertical stage of weaving when I realized that the patch was not going to be a dense fabric... the original fabric is more of a mesh, but that won't work for the patch. 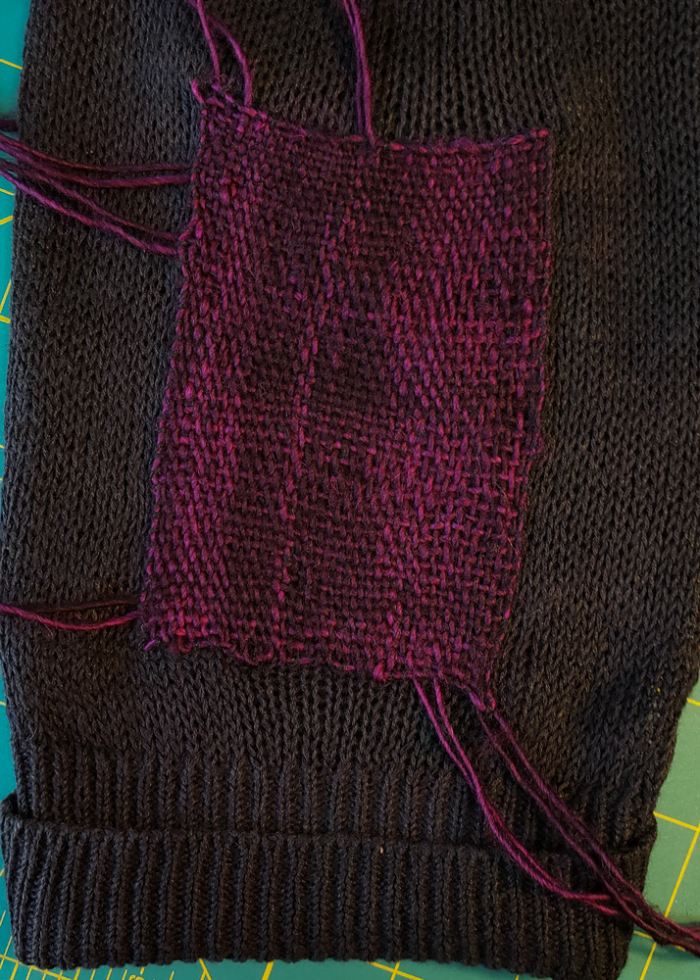 So I eyeballed it and wove some more yarn in vertically, until it felt & looked right -- not quite twice as many. 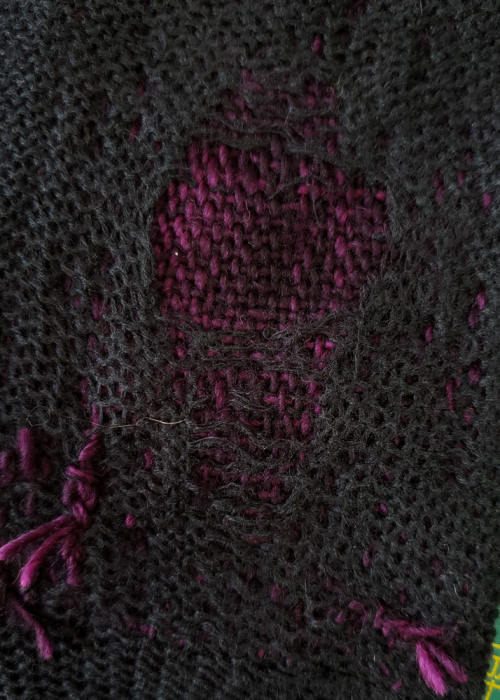 Then I wove in all the ends. That's the back side, above. WEAVING!

During this process, I thought of "Ruth" a million times. I never met Ruth, but when I was little and we'd go to my Grandparents' house, we'd drive through a little town called New London and I'd always spot/look for a sign that said "REWEAVING by Ruth." It was a fascinating concept! 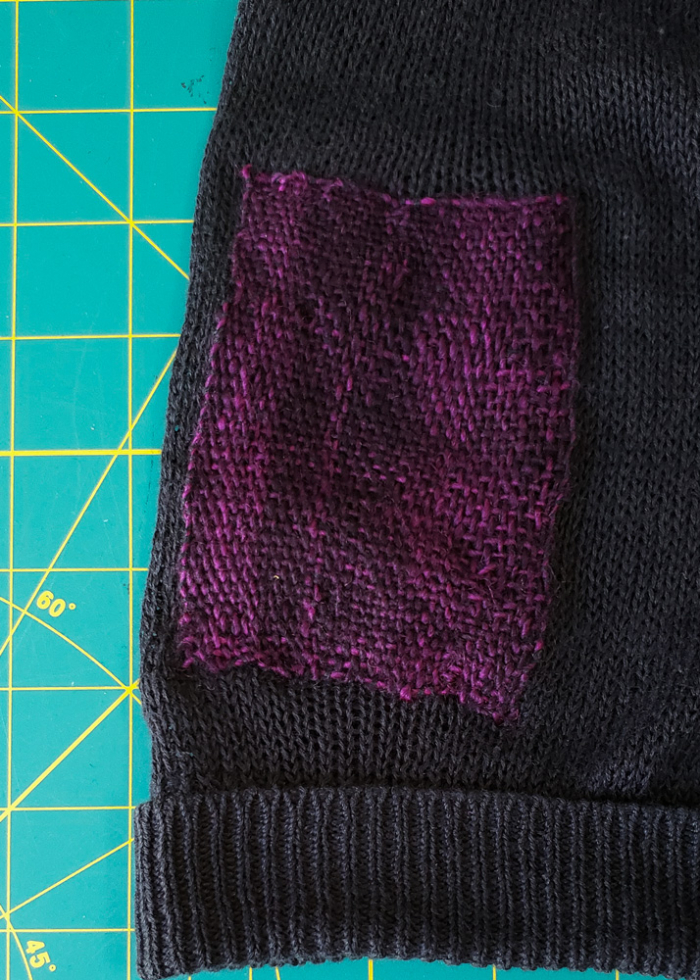 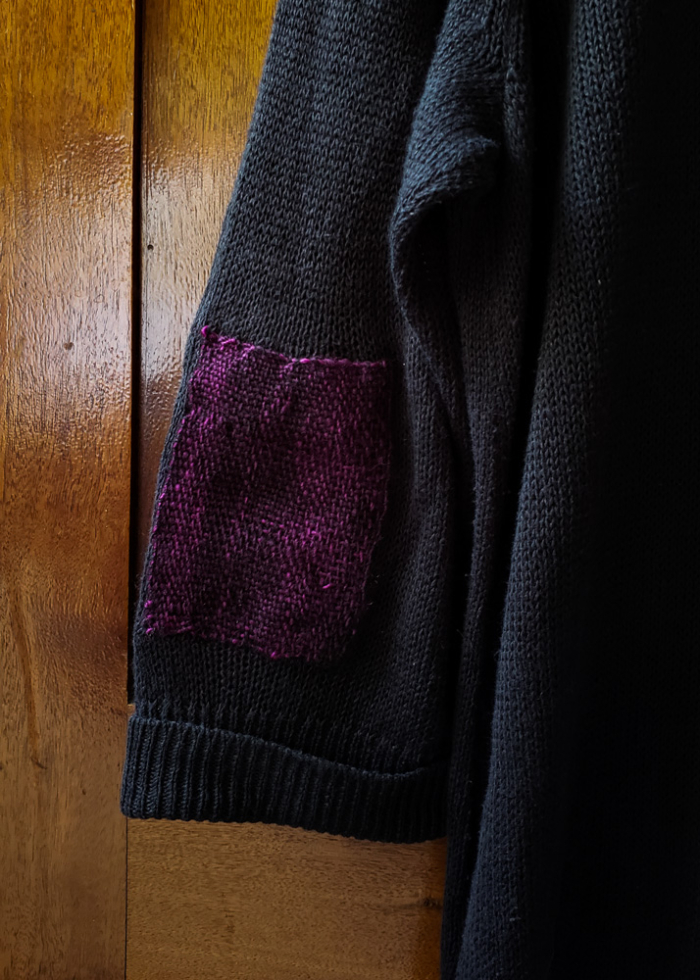 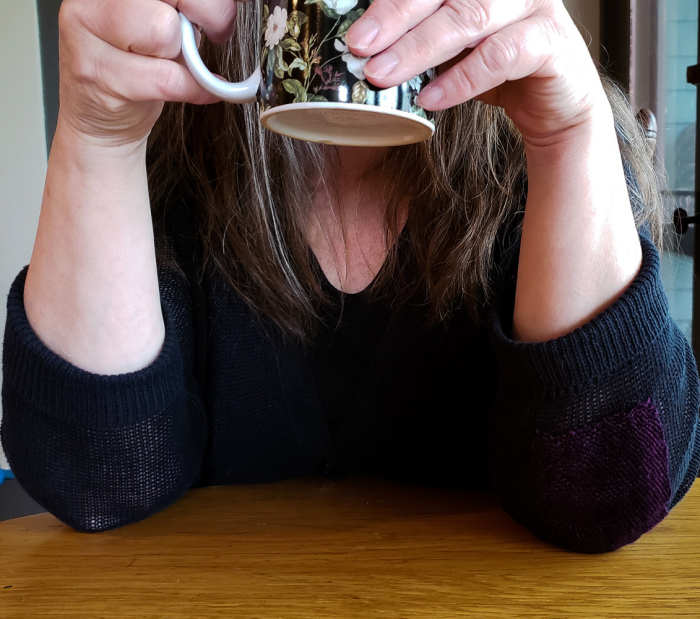 Though far from perfect, I am really happy with how it turned out, and I learned a lot. I'm wearing my patched sweater today (because it makes me happy... and it's chilly!), but I'll soon be patching the other elbow -- I'd like to do it before there's an actual hole -- and maybe trying another method/variation and possibly color.